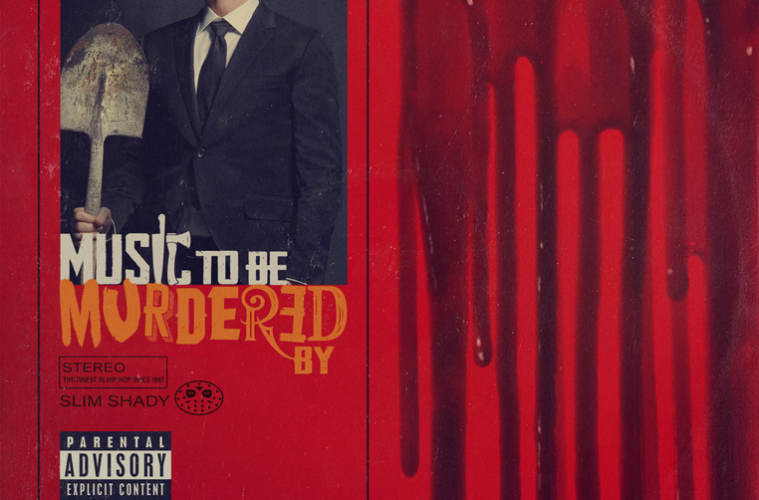 Eminem :: Music To Be Murdered By

The career of Marshall Mathers continues to divide listeners with each subsequent record he releases, and “Music To Be Murdered By” (MTBMB) is no different. Any sane fan of rap as an art form, in particular, the lyricism, maintains the utmost respect for Eminem’s gifted ability to weave words together. His writing, rhyme structure, and precise assonance have become increasingly technical and complex, but it’s difficult to confirm whether Eminem has improved as an emcee. His skill set has been upgraded, but this doesn’t necessarily equate to better music, best demonstrated by 2017’s career-low “Revival” that had many stating Em had finally fallen off. The science and engineering behind the raps were structurally sound, but it simply wasn’t enjoyable. The added frustrations of corny attempts at humor and production that is multiple steps down from Dr. Dre’s only added to Em’s poor reputation in hip hop circles. Misjudged Slaughterhouse records and a continued need to remain commercially relevant by shoehorning pop stars into his singles (does anybody still listen to “Walk on Water”?) only cemented his shaky status in GOAT conversations. As an emcee spitting rhymes, he’s one of the best to ever touch the microphone, but his catalog is increasingly reliant on the first 1999-2004 run.

We know how well-schooled Em is on his hip hop – he’s obsessed. But when your tour DJ is The Alchemist and your partner-in-rhyme for decades is Royce Da 5’9’’ (who regularly works with DJ Premier), it ultimately frustrates when he puts out music with mediocre (sometimes horrible) production. Either record label constraints restrict Em from recording the album he wants to make or he’s become so overly obsessive with improving his rapping and stretching the limits of the English language that he’s lost all sight of what made his music fun in the first place. My guess is the latter – and an Eminem album is now something that you don’t just throw on, nod your head to and admire the talent. Thankfully, “MTBMB” does have enough of these moments to justify listening through the full twenty songs, but it isn’t without its flaws.

“MTBMB” is predictably controversial as a title, but it’s not as dark as you’d think. There are flirtations with classic, chainsaw-wielding Em, and that intensity we were treated to on songs like “Underground” but musically, production is surprisingly tame, often by Em himself.

At twenty tracks deep, there is plenty to digest and a whole lot of rapping. The Detroit emcee continues to be a captivating personality, but his best performances often see him collaborating with either younger artists (we’re talking 20 years younger) or his contemporaries (fellow GOAT emcees in their 40s). I’ll get to these later, but amongst all the chaos, “Darkness” shines brightest. The lead single sees Em approach the topic of mass shooters in a manner not dissimilar to how he tackled obsessive fans on “Stan”, but his rhymes are written in metaphors for a performer at a concert. Getting ready to “kill it” and “locked and loaded for rapid fire-spitting” it quickly becomes evident he’s armed with more than just rhymes. No signs of mental illness, no prior convictions, and a gun license – common themes amongst unpredictable incidents in recent memory, highlighting how easy it is to murder a large number of people when one is feeling suicidal. This isn’t the first time he has addressed the issue, controversially showing empathy for the Columbine killers in 2000’s “Marshall Mathers LP” (with a smart flip on Rakim’s 7 emcees concept on “I’m Back”).

Em is most effective when he raps at his traditional pace. The rappity-rap material in 2020 feels contrived, designed to impress but it inevitably feels unremarkable. The last verse on “Godzilla” demonstrates impressive breath control, but Twista and Busta Rhymes delivered better examples of this feat, decades ago. We know Em has it in his locker to out-bar anybody, but packing as many words as possible into a verse ends up diluting his message and given Em is a clever writer, he shouldn’t need to resort to party-trick mode.

Some of the best moments on “MTBMB” highlight Eminem’s heritage as a battle rapper. “I Will” sees a Budden-less Slaughterhouse-assist with a slew of quotables – my favorite line coming from Joell Ortiz: “All your bars are subpar like good golfers, I put a hole in one of you birdies with this Eagle and launch it”. There’s also a rare hook from Em that isn’t weak:

For the most part, the hooks on “MTBMB” are poor. The Ed Sheeran track “Those Kinda Nights” is inevitably catchy and tailor-made for a mainstream audience, but it’s certainly a strange addition in the context of the album. Who’s murdering people to Ed Sheeran? That’s a whole new level of depraved. The Juice WRLD collaboration “Godzilla” is goofy and misjudged, with some of the dreaded cornball lines (“you’ll pass out like what you do when you hand out fliers”),but it’s clearly a popular track judging by streaming figures.

Family issues are a running theme throughout Em’s career, and he shares childhood grief on “Stepdad”. It’s standard Em, but a violent counterpart to 2009’s tongue-in-cheek (or is it dick-in-cheek?) madness that is “Insane”. Speaking of illegal concepts, the mere idea of Black Thought and Eminem rapping in the same room was teased in 2009’s BET Cipher, and a decade later they join forces on “Yah Yah”. Throw Royce in and you’ve got a triple attack that elevates the “Militia”-style posse cut to nuclear levels. The Busta snippet, Q-Tip on the hook and Royce citing Wu-Tang and Ice Cube, all screams fan-service and it’s as great as you’d expect. Check Em’s verse:

“Me and this game, we got married already
Had the prenup ready, fucked on her, should’ve seen her belly
She barely was three months pregnant
Bitch had to give me a baby, we named it Machine Gun Kelly
Now here’s to LL, Big L and Del
K-Solo, Treach and G Rap
DJ Polo, Tony D, ODB, Moe Dee, Run-D.M.C.
Ed OG, and EPMD, D.O.C., Ice-T, Evil Dee
King Tee, UTFO and Schoolly D, PE and BDP
YZ and Chi-Ali, Rakim and Eric B., they were like my therapy
From B-I-G and Paris, Three Times Dope, and some we’ll never see and PRT
N.W.A and Eazy-E, and D-R-E was like my GPS
Without him, I don’t know where I’d be”

Em’s still got plenty to offer hip hop, and he’d do well to take a leaf out of Royce’s book. The story-driven, personal records that may have an accessible single (“Layers”, “Book of Ryan“) are complemented by pure bar spitting over grimy beats (“PRhyme 2“) – it’s worked for Royce particularly well. “MTBMB”‘s a mish-mash of production styles and the Alfred Hitchcock theme isn’t really kept to. After publically denouncing the reviews he received for “Revival”, the Detroit veteran dropped “Kamikaze” as a response to the criticism. It felt odd for an emcee as wildly vicious as Em to take critical reviews to heart, showcasing an anxious side to his character. He clearly cares about his output, but “Music To Be Murdered By” is, unfortunately, another mixed bag of tricks, propped up by lyrical acrobatics and underwhelming production.

Eminem :: Music To Be Murdered By
6Overall Score
Music5
Lyrics7