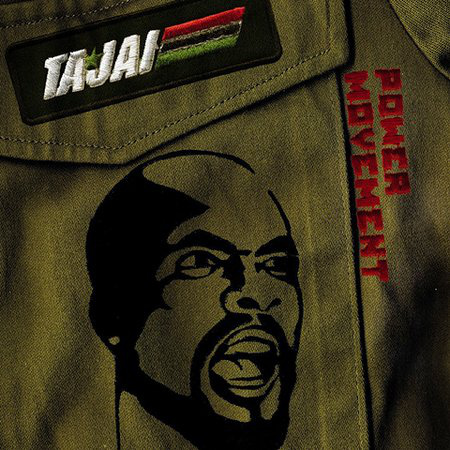 After years of kicking it with the Hieroglyphics grew, Tajai finally has an album to himself and fans have been waiting eagerly waiting for some quality material from him, that time has arrived.

“Power Movement” is a nice away of saying “I have arrived, move over”. Over an even course of 14 tracks, Tajai demonstrates why he has always been one of Hiero’s underrated MC’s. The wicked lyrical skill that he displayed in Hiero tracks of the past are very much present here, whether it’s the non-stop flow in the Chinese flavorerd “The Dum Dum”, or the rapid style he delivers in a track featuring Goapele, “Dedication”, where he offers advice to the haters:

“To these cameras posin’ with guns thinkin’ that’s going to stop me
Your soul is now my property, you should’ve shot me
to these half naked hookers, man be starin’
put some clothes on then we won’t have nothin’ to stare at
To these rappin’ ass show promoters, please don’t flow
Just introduce me and collect my dough
To these ol’ internet busters, come up and speak
In fact, don’t come up and speak, you might get your ass beat
To the hype man, who don’t know his rapper’s rhymes
Got ’em runnin’ out of breath or leavin’ blank spots half the time”

He is able to do damage on his own, but some of the best songs on the album are those where he collaborates with others. Casual and A-Plus join him in “Fashion Fetish”, which at 52 seconds could have easily went another three minutes and possibly turned into the album’s best song. One of the best is a track with Pep Love, “Do Not Touch”, and here Pep almost comes up with what may be the album’s best lines:

“What it ain’t no doubt about, Hieroglypics is
A timeless gem of the utmost significance
My delivery shivers the mighty Oaks roots
You rappers and killers that won’t shoot
I try to give you the hints, but you stuck in the muck
About to self destruct in your predicament
I’m tickled pink when my pen trickles ink
Upon my pale page heads roll when my sickle swings
Pep Lava and Tajikistan
Natural disasters unleashed on man”

The best song on the album happens to be “Let’s Live”, backed with a great instrumental from A-Plus. Tajai begins the song with an ode to the Jungle Brothers (“struggle to live, struggle to live, struggle to survive/struggle, struggle, just to stay alive”), and then brings listeners to modern times and shows that the struggles discussed back in 1988 are very much with many of us in 2004. Positivity, in a hip-hop song released in the 21st century? Damn right, showing hints of what he learned in Souls Of Mischief, and the varied styles in the song pretty much shows the progress of West Coast hip-hop in a matter of a few months. One could easily find Posdnous jumping in and offering some science. The untitled spoken bit after the end of “Let’s Live” definitely will bring up some nods of approval, and is sure to be used on mix tapes for the next few months.

With additional production from Domino, Kool DJ EQ, Skitzo, Pinchhitters, Fakts One, Kimani, and Amp Fiddler, “Power Movement” is a celebration of everything that makes Hieroglyphics so great and influential, and firmly establishes Tajai as someone to not be messed with. The greatest reward would be for a young kid to listen to this and continue with this type of intellect that at times seems to be a dying trend. Take heed of the power movement, children, take heed.