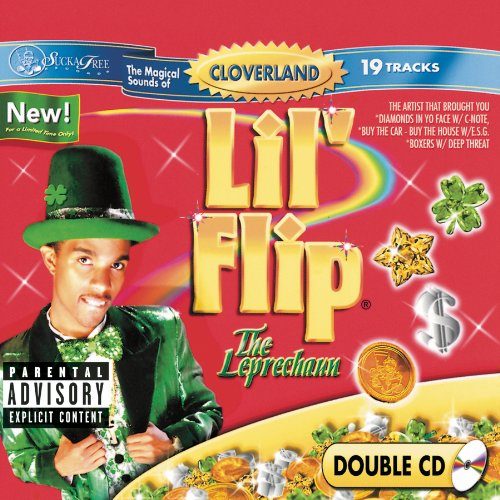 Thanks to the success of albums like “Undaground Legend” and “U Gotta Feel Me,” the music industry is suddenly interested in re-releasing old Lil’ Flip albums to cash in on his newfound popularity. One of the ones blinging on store shelves is 2000’s “The Leprechaun,” an album that was incorrectly perceived as a joke by many people unfamiliar with Southern hip-hop. The reason? The album’s cover parodies a box of Lucky Charms cereal, with Flip as the green-suited spokesman hawking the product. Even the album’s back cover featured an ingredients table with contents like “Total Phat: 100%, Total Sucka: 0%.”

Now that Flip has gone national off the strength of songs like “The Way We Ball” and “Game Over,” it’s time this misunderstood album was re-discovered. While Flip is definitely a lyrical joker with the kind of humor reflected in his album cover, there’s nothing that isn’t serious about “The Leprechaun.” This two disc album is well considered, carefully planned, and smoothly executed. After an introduction to inform the listener Flip wins “Da Freestyle King Award,” the J.P. Nitty produced “I Got Flow” gives the MC his first opportunity on the album to shine:

“I’m lookin good, I’m dress good, I feel good
I stay right between S.A. and Hillwood
Cloverland on da map I know you know that
Every song I put out BABY, I wrote dat
But I’m freestylin, comin from the top of my dome
I got satellites all at the top of my home
I got diamonds, all on the top of my phone
I got ice and it’s all on da top of my cone”

It’s not the strongest beat on the album, but it serves as a nice solo showcase for Flip’s deliberately unhasty style. It’s important to start the album out this way, because the next two tracks drown out his voice. “Everyday” is the kind of smooth song you want to cruise to in your ride, but you’d be hard-pressed to find Flip amongst the long list of guest stars. The Nitty produced “My Block” is no different, other than Flip getting the first verse and level of bass vibrations being cranked up quite a bit. Willo’s “Gotta Be Me” is the first song to give the album squarely back to Flip. Even at the young age which Flip recorded this album, the rapper already feels he’s got it made:

“I’m an eighteen year old CEO
I got fans that’s dyin to see me flow
My favorite movie is CB4
H$E Click, you know we throwed
I’m 6 foot 1 on the digital scale
I’m a ghetto star, and a man as well
And I’m all about my mail like a man in jail
I wonder if I put my tape out, can it sell?
Only time will tell how many copies get sold
At night I pray to God that I live to get old
Cause half of my homeboys already dead
And the other half, doin time in the feds
I’m like the Cincinnati Reds, I’m playin ball for the pennant
And if I fall while I’m tryin I start from the beginning
They say practice make perfect and it really paid off
I’m my own boss now, so I can’t get laid off”

The only guest is Cresia, who sings a pleasant chorus whose melody and words will seem very familiar to R&B fans. This is followed by “Put Yo Fist Up” featuring a heavy Todd produced bass and guest raps from the underground hispanic legend South Park Mexican. It’s followed by the oddly charming “Boxers,” a track whose production and guest singer Deep Throat create the overall effect of a raunchy R. Kelly song. Things get back to normal for Flip on the Willo produced “On Point” featuring Big James, with a chorus clearly inspired by A Tribe Called Quest’s “Check the Rhime” when you hear “You on point James? (I’m on point Flip).” Willo seems to be the producer who does right by Flip most throughout the album, producing hot tracks like “Cut 4 U” and “Green Rectanglez” as well as the album’s breakout single, “I Can Do Dat”:

In the tradition of Juvenile’s “Ha,” Flip’s song worked an easy to remember trademark into the end of every line while avoiding the temptation to rely on it for the rhyme instead of crafting good verbal precedents. More than any other track on “The Leprechaun,” this methodically paced song and Flip’s carefree attitude broke him out on the hip-hop scene. That’s not to say there aren’t serious songs on the album, such as the posse tracks “My Dogz” and the surprisingly insightful cut “The Biz” about how skanless the music industry is, where Flip ends every chorus with words of advice like “rule one – read before you sign the dotted line.” It’s the sense of humor found on skits like “Purple Drank” though that gets Flip over. His recognized affiliation with the DJ Screw style of slowed tracks doesn’t hurt either, as the bonus disc focuses on it with excellent songs like “Soufside Still Holdin'” and the self-titled “Lil’ Flip.” Those who knock it have never tried it, as bring a track down in speed gives bass hits extra oomph and the raps a whole new deep sound. While Flip had yet to perfect his style at this young age and can sometimes be accused of lacking in charisma, “The Leprechaun” definitely put him on the map as one of the South’s rising stars. Fans of his more recent albums will definitely appreciate this re-release.