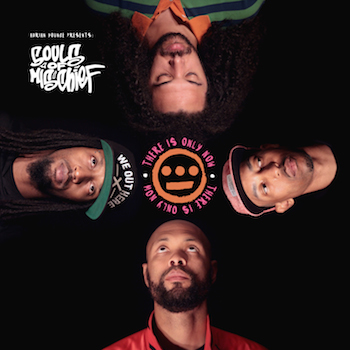 Souls of Mischief & Adrian Younge :: There Is Only Now

Last year’s critically acclaimed “Twelve Reasons to Die” paired Wu-Tang Clan cult favorite Ghostface Killah with California law professor and music producer Adrian Younge. The bi-coastal combination may have seemed unlikely going in, but the results coming out was that Adrian Younge was THE MAN overnight – the guy every rapper and group wanted to collaborate with for an album. Mr. Younge has remained remarkably selective though, choosing only the projects which further his musical goals, working only with the artists who are mature and experienced enough to benefit from what he can offer and vice versa.

The upshot of being so choosy is that Souls of Mischief’s new album “There Is Only Now” is only the second full length album that Adrian Younge has done with anybody in hip-hop. Over two decades after dropping the legendary “93 ‘Til Infinity” album, the veteran Hiero crew of Tajai, Phesto, A-Plus and Opio continue to defy the odds as collaborators and for career longevity. Very few rap artists make it more than a few years before they’re chewed up and spit out by the music industry, or disregarded and overlooked by the fickle fuckery of consumers. The percentage of groups who stay together before those combined pressures make them turn on each other and break apart is even lower.

It’s easy to draw a parallel between “Twelve Reasons to Die” and “There Is Only Now” given that both feature rappers which have stood the test of time for twenty plus years. The similarities get eerie as you realize Ghost continues to be successful as a soloist year in and out, but we’ve been waiting for the Clan to drop “A Better Tomorrow” since 2011 to no avail. The various members of SOM release new solo albums every year, but the last time the entire crew came together for a studio album was “Montezuma’s Revenge” in 2009. Souls could claim they are the Adrian Younge collaborator with the least crew drama – you have to go all the way back to 2007’s “8 Diagrams” to find the Wu united in one place at one time.

“There Is Only Now” is a concept album where the members of the group act and react to a nearly tragic incident in Oakland, given context by the fictional radio station 90.7 FM K-NOW. The quartet seeing life flash before their eyes at the album’s start on the aptly named “Time Stopped,” ducking for cover as a gunman seems intent on mowing them down. Later on a K-Now interlude we learn that things have gone from bad to worse, with “one member missing in action, and three members contemplating reaction,” though the careful sequencing of tracks allows you to jump in at any individual point of the presentation without having heard the tracks before or after it. The album rewards the longplay listener though by letting the entire story unfold song to song over a span of 41 minutes.

If you still choose to grab the album in random or undetermined order, you’ll enjoy the classically informed beats of Adrian Younge just the same, with tracks like “Miriam Got a Mickey” that wouldn’t sound out of place on the score of a movie starring Rudy Ray Moore. For those who do take it in order, the album concludes in epic fashion with the Souls rescuing their missing partner-in-rhyme on “Narrow Escape,” then celebrating their triumph on “Finally Back” before the “Last Act.” Along the way occasional guest stars pop in for cameo roles in this cinematic presentation, including fellow California emcees Snoop Dogg and Armon Collins – b/k/a Scarub from the Living Legends.

While the latter’s cameo is presented as a standalone track, as is the Busta Rhymes entry “Womack’s Lament,” the Snoop song is a genuine collaboration that some critics have panned as “a cheap publicity stunt.” That also means they haven’t heard the song or considered how Snoop’s laconic Long Beach drawl melds ideally with these Hieroglyphics over Younge’s beats. The real crime is that it took this long for such a natural pairing to happen, and the same can be said for Younge and the Souls in general – well met on this conceptual CD. The beats and rhymes give life to a truly cinematic experience, as though the Souls had been airlifted from Oakland to a Hollywood soundset. It’s a short trip geographically but a long player musically that’s worth revisiting many times after your initial purchase.

Souls of Mischief & Adrian Younge :: There Is Only Now
8Overall Score
Music8
Lyrics8