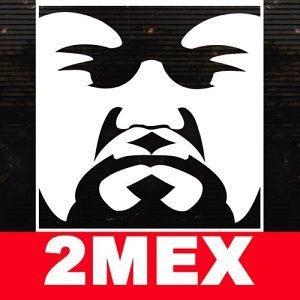 Fans of the forward-thinking West coast rap group Visionaries expect the members to expand on solo projects, much like Wu-Tang Clan fans did throughout the 1990’s. From LMNO’s “Leave My Name Out” to DJ Rhettmatic’s “Exclusive Collection” (also a member of the Beat Junkies) to 2Mex’s “Words Knot Music,” the crew stay busy even when they’re not working together on group albums like “Sophomore Jinx” and “Pangaea.” And among them all, 2Mex may be the busiest and hardest working. A quick check online shows that the self-titled “2Mex” is his FIFTH album in the last four years.

You the reader out there in cyberspace is probably wondering one thing: “If 2Mex is so prolific, how come I’ve never heard of him?” 2Mex is prolific to be sure, but he’s not in any way a commercial crossover. In fact the aforementioned “Words Knot Music,” his first solo album, lived up quite literally to the album’s name – words, not music. Although some critics did hail this stripped down LP of hip-hop poetry as visionary (double entendre intended) it didn’t exactly move the masses, let alone move mass units. This was much as 2Mex intended, one of the purest unadulterated hispanic hip-hop artists to be found today. One listen to his music and it’s clear he is more than happy to make art for art’s sake, regardless of whether it sells, as long as it’s authentic.

Taboo though it may be to make reviews personal in the austere and plastic-wrapped marketplace of criticism, I can’t help but share with you how genuinely SHOCKED I was to find a 2Mex album at Best Buy. Not just Best Buy. I found a 2Mex album on the shelf of a Best Buy in DES MOINES, IOWA. To say this was unexpected is an understatement. Even in my hometown of Omaha, a city much larger and (with no offense to Des Moines) much more urban than any in Iowa could hope to be, you’d have a harder time finding a 2Mex album on record store shelves than you would finding a needle in a haystack. While it remains a mind-boggling mystery to me why the hip-hop selection in Des Moines should be more progressive than it is in The Big O, I’m certainly not the kind of fool who frowns on good fortune. I copped the self-titled “2Mex” with no hesitation, eagerly looking forward to writing this review.

Vocally 2Mex is a smoked out mixture of Sen Dog and Aceyalone, although an octave lower than either and twice as gruff in his delivery. Lyrically he’s an unabashed reconstructionist, eschewing simple rhyme schemes for complex structures that enable him to draw out ideas, concepts and narratives in vivid wordplay. Some rappers who use this technique feel unbound by their music and flow freely on and off the beat, either to good effect or bad. 2Mex on the other hand remains concious of his breath control and the tempo, using his advanced oratorical techniques to keep a song structure in tact. When you want to hear “Words Knot Music” he can certainly do that, but on an album like this self-titled release, he’s all about sonic landscapes like the one he crafts on “Escape the Toyota Matrix”:

“Set fire to the bi-a-nary, inside of me
It’s the di-a-ry of a li-brary
Words are spells – over sounds that were buried
Birds that fell covered the ground, waiting to be carried
The death of a delicate pelican
at the hand of an olympic delegate, selectric elegance
It’s all irrelevant
The rise and fall of intelligence is the evidence
As Satan holds court, from a cop sidebar
God hides poor
The odds are his eyes are scarred
A thought star rises through the chardinal
The other bug, on the DL, we’re bein bugged
Computer bugs, AND cell phone bugs
And our bodies are bein bugged
Inside of our psyches we’re bein bugged
And when we travel, we’re bein bugged
At our workplace, bugged
Our spending habits are being bugged
Come over here, give me a hug
(The God inside of you is love)”

If this is not an exact translation, my apologies. 2Mex can be so complex it’s even hard to be sure you’re hearing his concepts the right way. There’s nothing wrong with repeat listenings though, as his lyrics invite repeat play to pick up on different meanings just as the beats on “2Mex” soothe your soul. Omid and Life Rexall produce smooth shit, from the bouncy “Treesun (Leave Her to Fall)” to the inspirational electronica of “Alive-a-Cation” to the softly somber “Only as Good as Goodbye” to the deceptively humerous sounds of “Baby I Ain’t Joking” featuring Awol One. In the latter, 2Mex makes this declaration:

“I wear my, art on my sleeve
As hard as it seems, my heart rips apart at the seems and bleeds”

Even though 2Mex is talking about a fly honey, he could just as easily be using a Common Sense metaphor for Hip-Hop in it’s Essence and Reality. 2Mex isn’t afraid to put his soul into his art, and it shows in an album that transcends cliched concepts other rappers kick about fat rides, mad bank, and lots of sex with scantily clothed women. Maybe when he picked his name as an MC, he thought that he would be “too Mexican” for a hip-hop audience. He’s not though. What 2Mex actually happens to be is too advanced for a pop audience who expects their raps to be simplistic, beats to be formulaic, and songs that don’t provoke deeper thought. 2Mex should probably change his name to 2Real, but that would be denying him the heritage he clearly takes so much pride in. Whether you’re in Des Moines, Los Angeles or New York City, if you prefer hip-hop that’s a bit beyond the ordinary, the self-titled fifth album from 2Mex will be right up your alley.