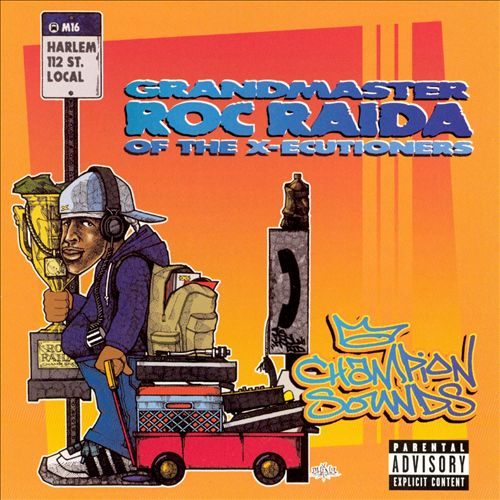 “Battling, friend or foe, his craft is mastered
From Pun to Big L, the man has classics
Can you rap this, disc jockey say that
hip-hop need Raida like a DJ savior
That’s why we gon’ get this paper
And ever he drop bomb, it’s the real thing player” – “Hip Hop Shit”

High praise indeed, but the man being spoken about has earned it. He’s Grandmaster Roc Raida, known as a member of the rap DJ all-star crew The X-Ecutioners for his swift turntablism but equally as well known for his sonic audio wizardry. “Champion Sounds” is meant to be a presentation of both, putting into perspective his wide array of hip-hop skills all in an ear-pleasing package of banging hip-hop music.

To say this selection is underground friendly would be an understatement. Then again, what would you rather hear – Raida flexing his world championship skills with a set of commercial (and often mediocre) artists, or pick apart the beats for some of the underground’s most underrated independent MC’s? Actually Roc Raida could make either sound good, but it’s certainly more fun to hear him crib records with cats like Scram Jones, on wild freestyle punchline cuts like “Bang Bang”:

“Hey yo first things first, Scram Jones, I freaks the track ugly
Spit with one hand on my pants like Al Bundy
Waitin for my chance to see bank, relax comfy
Break me in advance cause damn I’m past hungry
Used to breakdance and pedal a black Huffy
Played up on the grass and kept my pants muddy
Now I’m sprayin raps and I keep my tracks funky
Makin it from scratch – call me the wax junkie”

Of course, it doesn’t really add up to read this in print if you don’t realize that Raida cuts up the first four lines of these bars over and over again, making you hang on to Scram’s last word before he actually breaks down and decides to give you the last word. If a weak turntablist pulled this maneuver, you’d find yourself vexed that he wasted your time with a bad backspin and some cornball slicing. Never that when Roc Raida is in the house – he takes an already good FCM track and makes it that much better. You’ll find this happens time and again throughout “Champion Sounds,” whether it’s Triple Threat verbally with Zion I on “Hit Em Off,” or with Rob Swift and Roc Raida musically on “The Cipha,” both songs pulled from the “Many Styles” album but making fine inclusions here.

Calling this album a mixtape would be overly simplistic, calling it a turntablist tricks album would be overly limiting. Throughout this album Adiar Cor Inc. (read it backwards) presents Roc Raida skills in fine form, with songs that are bliss to a DJ’s ear like “On the Cut” and “The Funky Beat,” but this album is just as likely to throw you a curve and give you some All Natural Inc. material like “Love It” by Daily Plannet featuring Rita J, or some Scram Jones Music Inc. like “What More Can I Say.” Scram is clearly a personal favorite of Raida’s, and there’s no reason not to hear that combo together more – it’s a natural like Jazzy Jeff & the Fresh Prince or Cash Money & Marvelous. Still, even if you don’t know cats like Daily Plannet, rest assured they rip shit to Raida’s beat:

“Pull out green tea for my people who still down that poison
Poised and chill when, faced with conflict
Ric Flair (WOOO!), rappin cats have no content
Just flamboyant, bullshit garbage
And in the spotlight, I don’t hate to admit it
I’m takin out you suckers and you hearin how I do it
Say love, you love it? (YEAH!) I know you love it
The way I break down my way of livin and discuss it
See my rhymes they so vivid
Like the first six Spike Lee flicks, subliminal to the audience”

Roc Raida has sho’ nuff created a fresh, one hour long, audio excursion for the listener to get funky with. The only downside is maybe Roc Raida tries TOO HARD to appeal to a strictly regimented audience of underground b-boys. Would it hurt so much to do one track with Fabolous, just to get a broader audience of exposure to Raida’s fantastic skills? Well maybe Raida doesn’t want to cross that line, and in truth as a Grandmaster he doesn’t have to. His place in hip-hop history is already secure, it just remains to see how well known he’ll be outside of the hallowed halls of the Turntablist Hall of Fame.