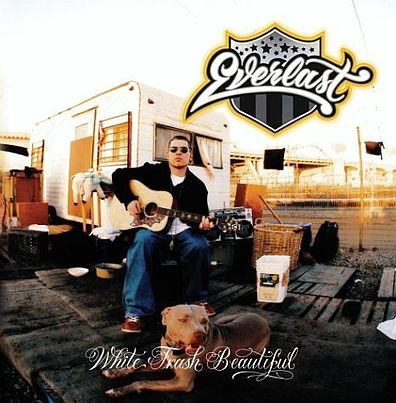 Truthfully speaking, Everlast hasn’t been a rap artist for a while now. 1998’s “Whitey Ford Sings the Blues” marked the end of his Master of Ceremonies career, and the beginning of a new chapter where the artist who almost singlehandedly made “Celtic Pride” a credible hip-hop phenomenon changed up into a folksy blues singer. The transition was made somewhat easier thanks to cameo appearances by Casual and Sadat X, and “Eat at Whitey’s” continued this trend with the likes of Rahzel and B-Real, but the album also included guest spots by Carlos Santana and N’Dea Davenport.

With his third album of Irish blues, the hip-hop credits in “White Trash Beautiful” now list solely as “background vocals.” Flip that script a little bit, and what you find is that Everlast is backed by a hip-hop background that Erik Schrody has amalgamated from the double lead latter House of Pain albums sold into pop music gold. Hip-Hop definitely plays the background at this point, figuratively and literally. Occasionally though Everlast toys at the notions some of us still have that he’s the same white boy who so impressed Ice-T that he became a member of the Rhyme Syndicate.

“The Warning” is a slick Dante Ross shuffle step with Sadat X samples, where Everlast sing-raps the details of gambling on dice and pursuing vice. Trying to bridge the gap back to rap at this point is a mistake, because he comes off like a gruffer, rougher, less pleasant version of Nelly that flows with about half the speed or charisma. When he ends the last verse with “word to God you ain’t ready” the listener will be in total agreement. “Soul Music” is Emile’s best attempt at doing the Kanye West/RZA style of sped-up soul singers, and it’s not bad, but Everlast sounds pained spitting verbals, like they’re choking in his throat. Only “Ticking Away” comes close to being a straight up lyrical banger, as he mocks being a “caucasoid devil” and still being a dope emcee anyway. For the most part though Mr. Schrody, your rap days are over.

For better or worse, Everlast needs to just stick to the mournful singing that made his post-rap fugue “What it’s Like” such a huge crossover hit. To his credit Everlast finds that voice, one which remains one of the most distinctive in pop music, just like it was when he was still an MC. He pours his troubles down a bottle on “Angel” and hopes for salvation from the woman he wronged. He comes within a hair’s breadth of achieving the Bubba Sparxxx country-rap fusion on “Blinded by the Sun” with singing instead of rhyming. The latter’s Rakim and Run-D.M.C. samples prove that Everlast can indeed reach out to a rap audience, just in a different way than one might have expected. With Ross’s hip-hop sensibilities matching with Everlast’s neo-blues crooning, songs like “God Wanna” and “Sad Girl” bring boom bap and hand clap to folk and give it funk. Aptly enough, the last track on this album is entitled “Maybe.” Maybe Everlast really does have a calling to sing. Maybe Everlast was not just kidding us with the last two albums. And maybe, just maybe, some of his old fanbase from the early to mid 1990’s are willing to go along for the ride. Just maybe.