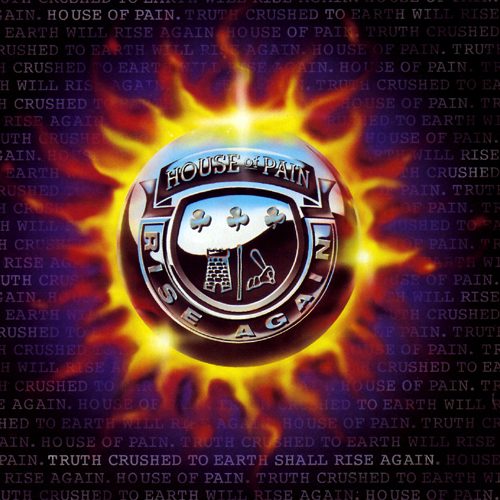 House of Pain :: Truth Crushed to Earth Shall Rise Again

I haven’t talked to my good friend Chris at Tommy Boy for a while, I assume he’s on vacation for the holidays. Nevertheless, when I see this CD’s liner notes and I listen to the music I have to ask — who is the “Original Scheme Team”, and why are they a new part of HOP’s crew? I recognize the name Divine Styler, but Cockni O’Dire rings no bells at all — however his ragga chat is pretty nice.

In particular, I like his patois commentary on the eerie DJ Lethal produced “Fed Up,” where Everlast joins the one bandwagon of nine-six worth being on – disgust at the state of the music industry. “Me no need no Benz, all me need is me bredren, FUCK me friends” raps Cockni; in a song where Everlast complains “everybody making shit that’s unreal.” Now lyrically, this can’t knock De La’s “Stakes is High” off as number one anti-Cristal/Versaci/lucci anthem of the year – but it’s sure nasty. Everlast is more than credible and the song will give your spine chills.

The album as a whole is a mixed bag, and aside from the standout cuts they seem to have lost a little direction without the talents of Muggs and the Soul Assassins. Also, it’s obvious that Danny Boy could be kicked to the curb; he’s no longer of any interest whatsoever. Everlast dominates every track on this album, except for “Heart Full of Sorrow” with Sadat X and the remix of “Fed Up” featuring Guru (rapped to the “Just to Get a Rep” beat). If you’ve heard these songs and the alternative first single “Pass the Jinn,” you may feel like you’ve already heard a House of Pain EP with the best songs and that this was the rerelease with bonus tracks you didn’t want. At least, that’s how I feel.

Still, I do find at least a few of the other tracks grow on me, not entirely for blazing Everlast lyricism (who does on occasion show genius) but more for DJ Lethal’s surprisingly dark and moody beats. They break some songs out of the mold, such as “Earthquake,” “X-Files,” “Killa Rhyme Klik,” and my pick as the next single – “Shut the Door.” And for the Audio Two sample on the “While I’m Here” shoutouts track, I give nuff respect. Milk definitely deserves the extra loot.

So here’s the breakdown: House of Pain fans will not be uncomfortable with this release, hardcore hip-hop heads will probably just want the “Fed Up” 12″, and most of the crew will not find this to be the antidote for what some have called a dismal year. House of Pain can at least be credited for not making it worse though; despite Muggs’ disassociation with the crew they still spark good rhymes and good beats. Just somebody _please_ tell me what’s up with the “Original Scheme Team…”