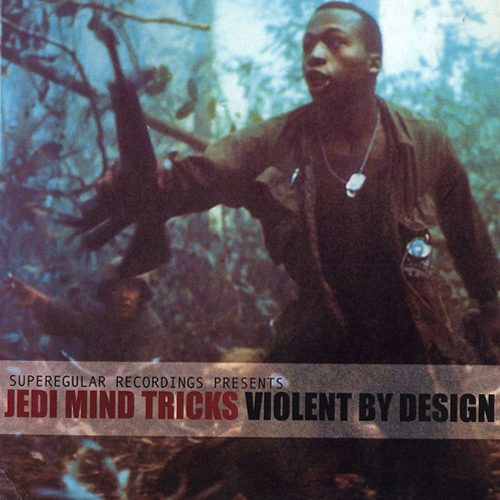 When Jedi Mind Tricks burst onto the scene in 1997, most heads didn’t even blink. Though the Philly-based group put in work on their debut, they remained in relative anonymity. For those who listened, the combination of Vinnie Paz’s conceptual rhyming and Stoupe’s atmospheric production was a success. Despite the excellence displayed on “The Psycho-Social, Chemical, Biological, And Electro-Magnetic Manipulation Of Human Consciousness,” the duo was just getting started. Enter “Violent By Design.”

After a short musical intro, “Retaliation” starts things off. Stoupe concocts a hypnotizing track with chopped up voice samples. Vinnie Paz, along with new member Jus Allah, attack the mic:

Jus Allah: “Feel no love
No way you shield the slugs
The ill thugs
We box with steel gloves
Doubt my faith, you can taste the slug case
Leaving niggas looking like dogs with the pug face”

Vinnie Paz: “So y’all better yield
Or Im’a choke faggots
My hands held more razorblades than coke addicts
We like to quote facists
Cuz we the meanest
And rip off your fingers with the pliers of Chakademus”

Their rhymes are graphic, to say the least, and some people will be turned off. Nevertheless, they are delivered with inspiring force. The real star of “Retaliation,” however, is Stoupe. The buttery beat is incredibly pleasing, and sets the bar very high for the rest of “Violent By Design.”

“Contra,” with Killasha, has Vinnie Paz spitting “holding the device tight/when it’s time for a mic fight/you’re a pagan trying to battle someone who’s Christ-like.” If you thought those words were chosen to offend, you’d probably be right. These emcees pull no punches with descriptions of violence and desecration. Homophobic references make an appearance as well. If they don’t offend you, however, lines like “drunk off the cop’s blood” bring a visceral, albeit occasionally ridiculous, ingredient to the rhymes. Paz and Jus can definitely flow, and they have essentially invented a new rapping style. A sample from “War Ensemble,” a bonus track:

Vinnie Paz: “I exit out of my sarcophagus, Fourth Horseman of the apocaplyse
For my esophagus breathes evil that just demolishes
Abolishes, to the darkness of Mephastophales
Mental in temple that went through an ancient acropolis
Conquered this, from a fetus to genius
Took DNA from the Shroud of Turin and cloned Jesus
Merciless leaders, the 19th galaxy
Born to a storm on the seas of Gallilee
Battle me and suffer whiplash from my apostles
Leave you in shackles in the castle of Nosferatu”

Name-dropping Jesus in the same verse as Nosferatu and Mephastophales certainly doesn’t seem to make sense, but it isn’t supposed to. There is really no point to many of the rhymes they kick, but since it sounds cool, and is so completely unique, I’m not complaining. Subject matter varies from anti-Christian propaganda to medieval violence to straight battle-rapping, but they illustrate the topics with such forceful conviction that the obscure references come to life.

Paz and Jus do begin to wear on the listener’s ear, though. Thankfully, there are enough guests peppered throughout to preserve their intensity. The likes of Mr. Lif, Louis Logic, and Bahamadia do wonders for maintaining the energy that Jedi Mind Tricks attempt to hold. Check out Tragedy Khadafi on “Ghengis Khan”:

“I hit the turnpike on dirtbikes with 2 ‘litas
On my way to Philly to fight for Mumia
Only thug guerillas’ll react to this
The laws try to destroy black activists
Half of y’all is performers and actresses
I keep at least a hundred grand in the mattresses
Shit so hot, soon as I write it I get indicted
I dare one y’all scared niggas to bite it
I stood in hood lobbies getting my rocks off
With longjohns and three pairs of socks on”

Guest spots like this are exactly what the album needs, because the angry rants Vinnie Paz and Jus Allah do occasionally get tiresome.

The glue that holds “Violent By Design” together is clearly Stoupe the Enemy of Mankind. The soundscapes he crafts on this album are complex, moody, and quite exceptional. “Heavenly Divine” has a remarkable blend of violins and a haunting vocal sample, with layer upon layer of samples for Paz and Jus to break down. “The Deer Hunter” features an intricate mix of harps and a female’s sad wailing. “Blood Reign” boasts an uplifting guitar section, with plenty going on in the background. All of these works, despite being completely distinctive, fall well within the range of the musical themes that Stoupe brings to the record.

Stoupe’s crowning achievement, however, comes on “Sacrifice.” After a short intro and a sample from the movie “Antz,” the stunning track fades in. Heavy strings swirl around the expertly placed scratches and booming drums, generating one of the greatest single-song productions I have ever heard in hip-hop. Vinnie Paz and Jus Allah have relatively short verses, which thankfully allows for over a minute for the instrumental to disappear. The sheer beauty of Stoupe’s work on “Sacrifice” is astounding. The rest of “Violent By Design” is incredible, but nothing else compares to this masterpiece.

Stoupe is no longer the well-kept secret he was before the release of this album. Canibus took notice and tapped him for 2003’s “Rip The Jacker,” and JMT’s “Visions of Ghandi” brought him to the forefront of the underground producing class. “Violent By Design,” however, is his crowning achievement. He practically invents a new method of hip-hop artistry, with influences from legends like the RZA. The production here is perfectly married to the vocals, and snippets from countless movies and even a WWF quote add to the atmosphere. His work here is absolutely riveting.

The cover artwork to this album features a black man in army fatigues, charging through the jungle with a machine gun. This is a perfect introduction to the music held within. Make no mistake, “Violent By Design” is fierce music. By adding another emcee and evolving their sound, JMT created a completely unique work with their sophomore epic, originally released in 2000. Courtesy of Stoupe, each song is brimming with random vocal snippets and string-laden, moody samples. The two emcees rap with unfettered fire, attacking everything from Catholicism to the American Government. This LP is a trip, in every sense of the word. Without a doubt, JMT’s work is something to explore deeply, especially for the wonderful harmonies that Stoupe manifests. For those with patience and a sense of superior hip-hop, “Violent By Design” cannot be ignored. It is simply too remarkable.