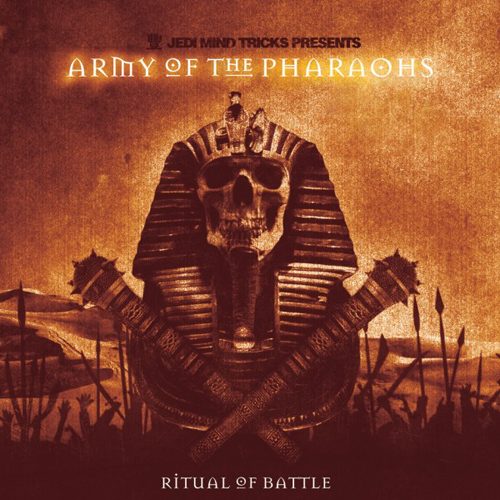 Army of the Pharaohs :: Ritual of Battle

Yesterday, I had to go to a luncheon being held in order to celebrate an achievement of one of my uncles. It was a relatively formal occasion, and I was one of the only youngsters there – by ‘youngsters’ I mean most of the guests there (and certainly everyone on my table) was at least twice my age. This, in turn, invariably led to a group discussion about “the good old days”. Yes, the days where children could play in the street without fear of being abducted, food was food and the laws of the country were common sense. I had a think about what they were saying, and related it to hip hop. It helped me to clarify my thoughts on the impending review of this AOTP review – in the good old days, they would have been known by their full moniker, Army of the Pharaohs, but since we live in such fast-food times, I shall be using the abbreviation. Sorry uncle.

Jedi Minds Tricks officially presents the group, or supergroup as they should really be called, compiled by Vinnie Paz of JMT fame, including Vinnie himself, Jus Allah, Esoteric, Apathy, Outerspace and many more. The chemistry between all the members is superb, and whichever combination blesses the track, the results is almost always unqualified success. Plus there are some absolute crazies â€“ the moment Celph Titled starts rapping about “Demons and wizards” in the strangest voice youâ€™ve ever heard, and it STILL works, you know that this album is a cut above the rest. That is on the solid opener, “Swords Drawn,” and the best is yet to come: standout tracks include the Rip the Jacker-esque “Time to Rock”; a punch-line fest on “Black Christmas”; the combo of jazzy piano and scratched Nas samples in “Strike Back.” Even the last verse on “Through Blood by Thunder” is weirdly wonderful.

What is clear is that the sophomore LP from the self-styled underground supergroup is high on quality, and reminiscent of hip hop days of yore â€“ that is to say, they make the kind of music that many commercial MCâ€™s would love to dip their toes into, only their records companies wouldnâ€™t allow them too. It is hard, testosterone-fuelled battle music â€“ uncompromising until the very end, where the last track belatedly slows the pace down in the patch â€˜Donâ€™t Cryâ€™. It also somewhat matches the “good old days” of lyricism in mid-90â€™s hip hop. However, this is part of the problem â€“ this album doesnâ€™t really represent its time, it sounds years old, and not in the post-postmodern ironic way. It doesnâ€™t sound that relevant to the issues and struggles of today â€“ there may be a million ways to die, but that doesnâ€™t mean they should be listed. If “Ritual of Battle” so squarely aims to ignore 2007 and sound timeless, fair enough, Iâ€™m just not convinced that it entirely works. The album is an enjoyable listen, with some truly awesome displays of rapping, a high-octane ride through a blood-soaked battlefield. There is just a risk that the replay value of the album is somewhat limited by avoiding multi-layered subject matter.

In “the good old days”, kids could ride their bikes around with less fear of being run over. They didn’t sit on their backsides all day and were allowed to climb trees. Just like in the good old days of hip hop – MC’s didn’t have to dilute their rhymes for commercial reasons, music was real music and their rhymes really meant something. This, of course, is fucking nonsense. People always look through rose-tinted glasses at an era they had affection for. Whilst 50 years ago, kids had “proper” meals, people forget how much DDT and pesticide was sprayed directly onto those vegetables. Yes, they climbed trees, but their bedrooms were coated with lead paint, killing them softly. Hip hop in 1994 had some amazing artists – groundbreaking ones, like Biggie, Nas, Common, Snoop, Wu Tang, the list is seemingly endless… Except it isn’t endless. That era had great artists, but some God awful ones too, and some great ones that sold out for commercial reasons. Aside from that, some of the seeds that ‘gangsta rap’ has sewn – violence, misogyny, drugs, homophobia – are still being reaped with alarming regularity. Of course hip hop wasn’t as big business back then, and the record company pressure to succeed at all costs wasn’t as high as nowadays, but everyone should at least attempt to look at an era with some sense of fairness, balancing the good with the bad. Which leads us to AOTP’s album – it really is a superb listen, with solid beats, some awe-inspiring punchlines and a cohesion generally missing from most present day hip hop full-lengths. It also hasn’t really moved into the new millennium. The subject matter is two-dimensional, and somewhat stuck in the past. Whilst this has a certain appeal, due to the skilful delivery of the package, it isn’t ultimately fulfilling in a truly meaningful way. AOTP prove that they are amazing at what they do, but what they do isn’t amazing any more. They waste an opportunity to really connect, to really get a message across in conjunction with dazzling us with dope beats and dope rhymes. This is what separates the good from the great, an 8.5 rating from a 9. Some things should change with time, we can’t stay in the past forever, and whilst AOTP could bang out hot albums like this until they are buried beneath the pyramids, they could also take a risk and progress. A very good album that is one step away from greatness.