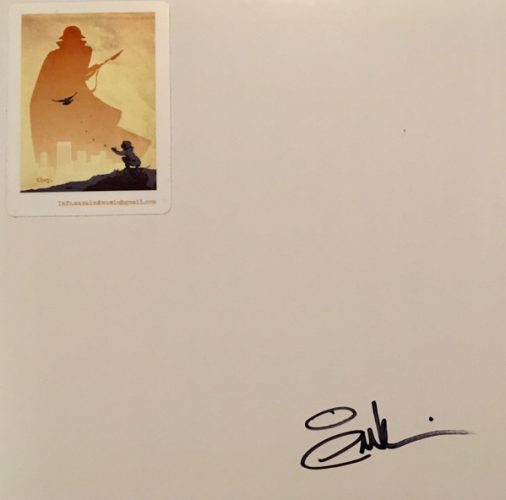 Stoupe the Enemy of Mankind :: they.

If you know Jedi Mind Tricks you know Stoupe the Enemy of Mankind and vice versa. The Philadelphia producer has been the signature auteur of their dark, gothic musical sound. If you think of any favorite from song or album from JMT there’s a good chance Stoupe produced it. Much like DJ Premier’s relationship with the late Guru though, that relationship has been somewhat contentious over the years. At various times Stoupe has both “departed” and “reunited” with JMT in general and their frontman Vinnie Paz in particular. I’m not insider enough to know what causes the schism between them, but I’m familiar enough with their catalogue to know they sound better together than apart.

Coincidentally “they.” is the title of this Stoupe solo album. The first thing you need to know is that in an era where most releases are easily acquired, “they.” is one of the exceptions to the rule. You can find an entry at the reliable Discogs website that proves a single exists, but it and the album both had a limited print run and no accompanying digital release. Even if you dig deep into outlets like Bandcamp you’re not going to find it. It seems that unless you were online the day he announced it you had no chance of getting it. That’s actually a purposeful strategy for artists and video game companies alike. Short release windows and limited quantities send people into a frenzy trying to get a copy, which in turn raises the profile of the release above the signal-to-noise ratio for the internet as a whole.

Once you have that hype in the palm of your hand you have to decide what to do with it. Do you continue to release small print runs and try to keep the demand perpetually high? Do you open the floodgates and make as many copies available as possible having achieved your goal? Do you prefer to remain a mysterious enigma and let the legend of an unobtainable item keep it a “holy grail” where your name remains (in)famous? Stoupe has for all intends and purposes chosen the latter. The only way I could review this album was through the upload a reader shared with us, and if the video above suddenly disappears because Stoupe asserted a copyright claim, please don’t hold us accountable. I have no control over what he does.

At first I was tempted to brand “they.” an instrumental album, but that’s not 100% accurate. Actual raptuals are minimal, with the most notable example being some bars from Recognize Ali and Lawrence Arnell, but for the most part it’s Stoupe showing off his layered production techniques. In the most complimentary way I’d describe what Stoupe has done here as furniture music. It’s music to enjoy in the background at an almost subconscious level. ALMOST. Even without the presence of Vinnie Paz, there’s still an undercurrent of conspiracy theories, mind control, dark experiments and manipulation through the samples intertwined with the beats. It’s as though you’re hearing a newsreel from the 1930’s or 40’s, with only the most ominous parts extracted and spliced together.

The way Stoupe blends his individual instrumentals together, overlapping tracks with barely a pause between them, defeats the purpose of discussing “songs” on the album as such. “they.” is an album that truly stands together as a whole for its 59 minutes, an album far greater than the sum of its parts, deftly woven into a fabric that is as inseparable as it is eerie. That’s good and bad news for those who would seek out this elusive album. If you really REALLY love the sound Stoupe the Enemy of Mankind made famous through his work with Jedi Mind Tricks, you’ll probably want to own a copy, but will simultaneously not be prepared to pay the price that it goes for. If you’re only a casual JMT or Vinnie Paz fan but like the music, you’ll be instantly be put off by the sheer unavailability of this and not even bother. I recommend “they.” if you can find it, but I don’t own it, nor will you.

Stoupe the Enemy of Mankind :: they.
8.5Overall Score
Music9
Lyrics8