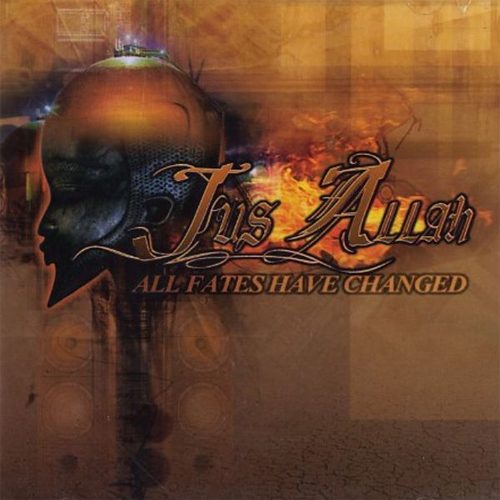 Jus Allah :: All Fates Have Changed

When underground heads talk about Jedi Mind Tricks, rarely does the conversation end without the mention of Jus Allah. Most heads tend to point to Jus Allah as a stronger emcee than Vinnie Paz and complain endlessly about how much the group sucks without him. While Jus Allah’s recent reunion with Stoupe and Vinnie Paz won’t end the annoying argument on who is the better emcee, it will at least give fans a chance to see the original group back together. While fans wait for the reunion album to come to fruition, they can appease their appetite by peeping Jus Allah’s highly anticipated solo album “All Fates Have Changed.” With “All Fates Have Changed,” Jus Allah shows that with or with Stoupe and Vinnie Paz he is a force to be reckoned with.

Any fan familiar with Jus Allah in his JMT days would probably be concerned with the quality of production on the album. While Stoupe doesn’t make an appearance, the other producers gathered by Jus Allah do a great job of providing the proper music to accentuate the grimy, dark atmosphere of the album. The most famous name that shows up is Agallah “The Don Bishop,” who recently expanded his fame as part of the flamboyant Purple City. Those only familiar with Agallah through Purple City may be wary of his involvement with Jus Allah, but be at ease as Agallah was blazing the underground with soulful beats years before he donned his first purple garment. On “This is For Y’all” Agallah infuses the track with energy by flipping the same “Weird Science” sample Alchemist used on Mobb Deep’s “Get It Twisted.” It’s done differently enough to sound like a completely different track and is subdued enough to fit Jus Allah’s style. “Supreme” finds Agallah playing with pianos to provide a track that is almost too hectic for an emcee to flow over. Agallah changes things up on “Tommorow” with an almost medieval track, with dope layered guitar melodies. Aside from Agallah, other producers also contribute solid tracks. Zach Johnson holds his own, especially on “Pool of Blood” where his dark and sinister bass line takes center stage. Overall, Jus Allah put together producers that complimented his style well and kept the mood of the album on the same level.

Lyrically, Jus Allah isn’t too far from his JMT partner, Vinnie Paz, in both style and ability. Jus Allah does get credit for being better lyrically than Paz, but aside from that the two emcees are almost identical. Jus Allah’s rhymes are full of strong Muslim ideology, dark themes, and many times unfocused and repetitive verses. This is not to say that almost every rapper doesn’t succumb to the same pitfalls. In Jus Allah’s case, instead of filling each song with similar tales of crime and money, he saturates the album with dark brags of supremacy track after track. On the Gza assisted “Pool of Blood,” Jus Allah proclaims:

“I keep blunts of sess in between my jaws
I keep chunks of flesh, underneath my claws
Animal like, raping lady Afro-Dite
I watch people bleed to tease my appetite
Slice your mug, we’re hand-and-knife thugs
That’s so hardcore we banned from fightclub
Brawl with night crawling blood alcoholics
Y’all only hope is wooden stakes and garlic
Islamic, thinking on a higher logic”

Jus Allah reiterates the same point on the bonus track “Chess King” where he declares:

“I have sublime comprehension
Divine Intervention
My enzymes studied by the minds at Princeton
To figure my design would divide the Christians
Complete Truth
Brothers been deprived of listening
A secret Odyssey
Ungodly, Cursing Prophecy
Reading Verses That will Preach a Demonology
I speak scholarly”

Even on the promisingly titled “Tomorrow” he doesn’t stray far:

“I’m almost out of love, I have very little to spare
Last nigga that I killed was in the middle of prayer
I’m god, so you think that I would probably care
Truth is I fucking hate y’all I solemnly swear
I could give a fuck if you die, no I’m not saving your lives
I never find it hard saying good-byes, there’s water under the bridge
Never under my eyes, the only thing that gets wiped is the blood off knives
There’s nothing, you niggaz lack purpose, you fucking worthless
I decided the earth, no longer needs your services
You never heard a god more fucking virtuous
What other job you get paid for being merciless
What’s the odds of you ever reaching perfectness?
Before Allah, puts you on the “missing-persons” list
Permanently so the body never surfaces
My policy: no accept return purchases”

Jus Allah is a compelling emcee and he does find different ways to say the same thing. His dark rhymes are a change of pace from what’s out there and they are definitely entertaining, but that doesn’t necessarily put him above any other emcee out right now.

“All Fates Have Changed” is on par with any release out today, whether it be commercial or underground. It’s an average release that replaces “money, cash, hoes” with Allah, brags, and horrorcore. Though Jus Allah is definitely concerned with different things than most emcees today, his CD rivals any Luke album as far as constantly addressing the same topic goes. So in the end, “All Fates Have Changed” gains points for being different but nullifies those points because of its repetitive nature.