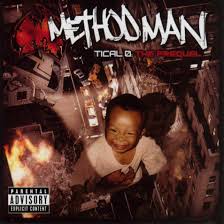 Method Man owns the crown as the single most perplexing rapper in the entire Wu-Tang Clan. That’s right – more than Ol’ Dirty Bastard, Inspectah Deck and RZA rolled up into one. While each of the aforementioned artists have managed to release albums that are solid from start to finish musically and lyrically, Method Man remains the Clan’s most well-recognized artist while simultaneously having a lackluster catalogue of LP’s. Critics and fans of Mr. Meth alike have known he was a fresh rapper ever since his self-titled debut on Wu-Tang Clan’s first album made the phrase “hey, YOU, get off my cloud” a hip-hop trademark. He was the Clan’s first breakout star, and songs from “Bring the Pain” to “You’re All I Need” to “Judgement Day” have shown he has the skills to fit that bill. That’s why Method Man is perplexing – he writes great songs, has one of the best voices in all of hip-hop, can flow at any tempo in just about any style, and yet somehow he STILL releases Wu albums that are mediocre at best. The beats miss the mark, the song concepts don’t materialize properly, or Meth goes out on an experimental limb and forgets to bring us along. While he and Redman make a natural and entertaining tag team, secretly Wu-Tang fans have to regret he’s better known for “How High” than any of his OWN shit.

The one thing that’s been consistant about Method Man this whole time is how few albums he releases, how far apart they are, and how each one is anticipated as “this time he’ll get it right.” So far, none have topped his “Tical” debut, although each have alluded to it by including it’s name in their title. “Tical 0” is his third album, the first in six years and coming ten years after his original solo debut. While 1998’s “Tical 2000” implied that the rapper was ahead of his time and failed to deliver on that promise, “Tical 0 – The Prequel” is trying the opposite tack. With his album, we’re supposed to be getting the PUREST form of Method Man – a form predating even his 1994 debut. Still as perplexing as ever, that’s our Method Man. This raises the expectations for this long-awaited (and many times delayed) album even higher. If this is the purest form of Meth available, then the high should be stronger than any other rap he’s ever done to date. Wu-Tang Clan and hip-hop fans in general should be left in pure ecstasy.

Unfortunately, being behind his time is not going to work any better for Method Man than being ahead of his time did. The first problem is that Method Man sounds like a guest star on his own album. With a bunch of Wu-Tang Clan guest appearances, this would be somewhat palatable, but they are rarely used. Instead the album swells with the big name stars of hip-hop: Missy Elliott on “Say What,” Busta Rhymes on “What’s Happenin’,” Redman and Snoop Dogg on “We Some Dogs,” Ludacris on “Rodeo,” to the point that hearing Ghostface on “Afterparty” makes it feel like he TOO is a cameo rapper instead of a natural Wu-style duet. Other than that, you can find Streetlife on a couple of tracks (if this guy ever breaks out of Meth’s shadow it’ll be a miracle), one Raekwon appearance, and a brief tease of RZA on the intro. One would think that if this was the purest, most uncut form of Method Man, he’d sound more like the Wu than he ever has in years – so it’s perplexing that he’s never sounded LESS.

You can say this much for the tracks that feature big name guests – they may not sound like good Method Man solo tracks, but they do come across banging. The real problem is that on his rare chances to hold down the spotlight on his own, he’s phoning it in. “Who Ya Rollin Wit” has the most embarassingly bad beat Jellyroll has ever produced, a sung chorus that’s flavorless, and rhymes that just don’t live up to the M-E-T-H-O-D’s own potential:

“Man, I’m in the house like foreclosures
Talk sober, until some doggy falls over
New York soldiers, be at ease, fall back
Meth forever, I’m the New Era like ball caps
Kid, whenever, whoever, whereever y’all want it at
Y’all can have it, the problem and answer, I’m all that
While we at it, let’s tighten up our grips around that cabbage
Silly rabbit, how many kids done tricked you out your karat
The product of a bad package, like Bishop Don Juan it’s Magic
How I break ’em like a bad habit”

What Meth is spitting here is not the epitome of clever lyrical concepts, nor is it a deeply engaging narrative, nor are the punchlines laugh out loud funny. It almost seems as though Meth only turns it up a notch when there IS another MC around, whether he’s guesting on somebody else’s shit or they are guesting on his. The trademark husky, blunted sounding rap voice is still in effect, but it feels tamed now. Perhaps too many years of doing movies in Hollywood and MTV shows with Redman have dulled the rough edges. You won’t find anything the likes of “I came to bring the pain, hardcore from the brain, let’s go inside my astral plane” here. Nothing even CLOSE. Whatever edge he had, he’s lost it.

The fact this reviewer is personally dissapointed in Method Man’s lack of progress as a rapper/artist should in no way detract from the fact that on the whole this album is fairly tolerable, perhaps moreso in some ways than his last release six years ago was. While “Tical 2000” dragged the listener from incredible highs to unbearable lows, this album stays consistently average throughout thanks to the numerous guests and the beats by No ID, Rockwilder and Yogi among others. The lack of a strong RZA presence is suspect, but as this album proves Method Man really hasn’t been carrying the Clan’s banner since “Iron Flag” anyway. Method Man hasn’t changed anything with “Tical 0” other than reminding people he’s still potentially the best Wu-Tang MC, who has yet to release a solo album worthy of him owning that title.