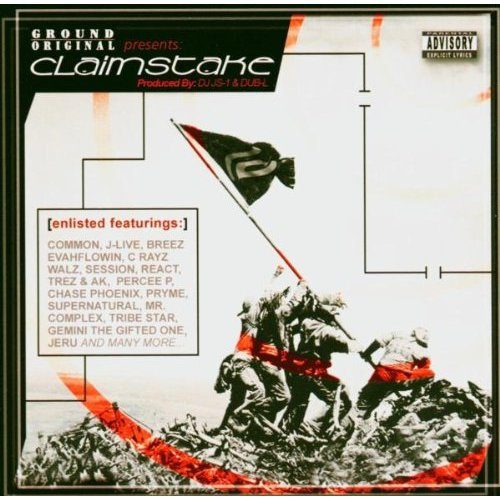 Solid production is at a premium, and, for the most, always has been. While stellar beats can often buoy a sub-par MC, even the best rappers usually can’t save terrible productionâ€”a problem that has plagued some of the best at various points in their careers like Nas, Ras Kass and Canibus.

With Claimstake, two relatively obscure beatsmiths, DJ JS-1 and Dub-L, join forces two forge a sonic landscape with the lyrical blessings of their favorite MCs, handpicked by themselves. The compilation-like offering is not totally unusualâ€”Pete Rock recently released his second installment in the Soul Survivor seriesâ€”but the far more common practice in hip hop is to release an LP under the name of one rapper and collect a few beats from each of a small handful of producers.

Despite holding a low profile, DJ JS-1 and Dub-L are, as the album title indicates, here to stake their claim. And for up-and-coming producers, there probably isn’t a more impressive list of guests than this one to help accomplish that goal: Common, Jemini The Gifted One, Jeru The Damaja, J-Live, Supernatural, Mr. Complex, C Ray Walz, Percee P, and Tribe Starr, among others.

Standout tracks are abound on Claimstake, and though the better-known artists deliver the quality performances one might expect, the more obscure artists hold their own, like Supernatural’s braggadocios battle rhymes over the horn stabs on â€œTruly Incredible.â€ The purpose of Claimstake is obviously to showcase the production skills of DJ JS-1 and Dub-L, and even with the awesome guest spots, they’re still able to keep the beats at the forefront, like the choppy, DJ Premier-influenced â€œNY Minute (Remix)â€ and the moody strings of â€œDay In The Life.â€

The light piano tickling, the soulful bass line and dope rhymes of a particular B-Boy from the Southside of Chicago on â€œWhile I’m Dancingâ€ will once again have people calling him Common Sense:

“Back to Resurrection…
Night breathes, we hustle to fulfill life’s needs
Travel at light’s speed the appetite for bright weed
We got seeds to feed in between greed and knee
Deep in the struggle and a nigga need to breathe
So I trip back to where I used to sip ‘ngac and kick back
Behind schools remembering our king, I don’t forget that
There are rules to the game, They gave, I gotta give back
I drop jewels knowing what I speak â€“ I gotta live that
Solomon sings a song that’s in tune with my dreams
I sing a song like Bob Marley to redeem
Itching for some scratch like a fiend
I weight/wait like that dope you put up on the beam
Though paper won’t, make my whole world serene
It will help a nigga do his thing
Through every rhyme scheme, I move closer to the supreme
For those in prisons over rhythms I interpret dreams
Tell cats with the block scene we on the same team
Revolutionary underground against the main stream
Tell cats with the bling, we on the same team
The world is yours for you to claim king”

Making moves in 2004 is Jemini The Gifted One, who, along with partner DJ Danger Mouse, is quickly becoming a household name. Riding the somber track â€œMakes The World Go Round,â€ Jemini shows why his stock is rising.

Jeru the Damaja, much like Common, sounds completely re-energized with his quirky flows over the impressive horn riggings on â€œWon’t Stop,â€ a beat that would surely bring a smile to the face of Pete Rock or 9th Wonder. And even the triumphant climaxes and decrescendos of the banger, â€œSoulcrush,â€ are reminiscent of one Just Blaze. J-Live meshes naturally over the intelligent â€œAll of Y’all,â€ a track which allows him to straight flow as only he can.

Of course, it wouldn’t be a true underground release without some unabashed mainstream hating, and DJ JS-1 and Dub-L try their hand at flipping a hip hop staple, aptly borrowing from A Tribe Called Quest on â€œRule # 4080.â€

While there’s little not to like about this offering, it is a bit jumpy from track to trackâ€”undoubtedly the result of such a varied smorgasbord of MCs. We would only be so lucky if this duo could team up with one or two MCs for an entire LP and put together a more cohesive-sounding album.

If it feels like there’s been a lot of top echelon producers name-checked in this review, well, that’s not by mistake or overzealous hyperbole. JS-1 and Dub-L are offering some serious heat behind the boards, and at this rate, it’s only a matter of time before they start popping up more often. The influences of powerhouses like DJ Premier, Pete Rock, Large Professor and many others are easily detectable throughout Claimstake, but it’s hardly biting as JS-1 and Dub-L parlay their favorite flavors into a sound all their own. More important than the sound itself is the obvious dedication this duo pledges to their craft; the talent, effort and reverence for the art form is all thereâ€”traits sorely underappreciated in the cut-and-paste and template-biting trends that are so pervasive in today’s music. Everyone is now on notice: DJ JS-1 and Dub-L are officially staking their claim.