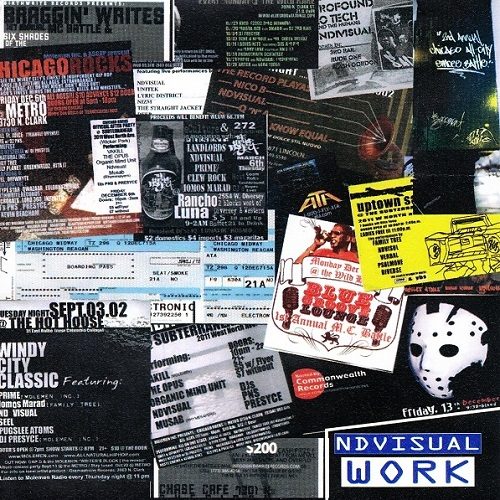 The debut full-length album from Visual (formerly NDVisual) is titled “Work.” And after reading some of the artist’s bio, it’s evident that work is something he’s going to have to get accustomed toâ€”not only is he white, but he’s from Chicago, IL, which is currently under the spotlight thanks to the Kanye-mania sweeping the hip-hop world. How much work has Visual put into this album?

Part of the work that an artist has to do with an album is choosing the right beats; and after hearing the dope Maker-laced intro, it’s evident that the production on this disc is stellar. Whether it’s the haunting ambiance of the Hi-c-produced “Watchout!,” the melancholy violins employed by Infinite Beats on “Dawn of Our Life,” or even the mellowed jazz on the “HollowHollaKillsTheHigh(Break)” instrumental interlude, all of the production on this album is on point.

Work is more than hot beats though. Armed with a captivating voice and a unique delivery, Visual proves himself a capable emcee as well. He shows political awareness on “U.S.” and “Dawn of Our Life,” and tracks like “In My Home” (featuring Avarice & Rhyme Scheme) and “City Sun” give him an opportunity to represent the Windy City. He even carries an extended metaphor on the conceptual gem, “Jungle.” And just in case you thought he couldn’t flat-out spit, the album is concluded with seven bonus tracks that are all radio freestyles and battles.