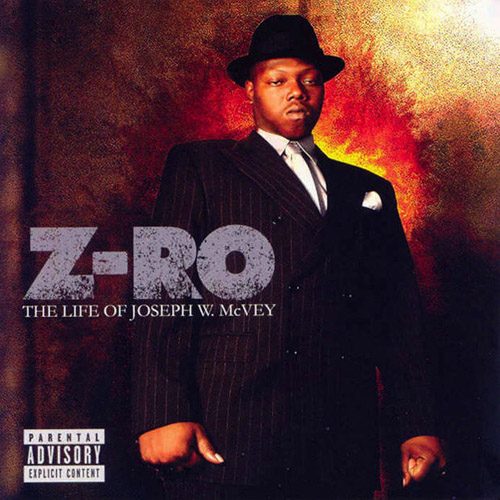 Z-Ro has been one of Houston’s elite underground “reality rap” artists since 1998, a fact that may be lost on rap fans who don’t follow the Texas scene closely or know much about the “Screwed Up Click” that pledges their allegiance to a sound and style closely associated with DJ Screw, R.I.P. Nevertheless Z-Ro’s name has been a rising star outside the lone-star state, and guest appearances on albums like Guerilla Maab’s “Resurrected” and Scarface’s “Balls and My Word” have helped raise his profile to the know-nots. With the 2004 release of “The Life of Joesph W. McVey,” Ro can achieve his highest peak of recognition yet, thanks to a deal with Rap-A-Lot Records that sees his album distributed far and wide beyond the regional “Dirty South” scene.

Long time Rap-A-Lot producer Mike Dean handles a majority of the duties on Z-Ro’s national debut, instantly giving this album a consistancy and clean sound that propel it to a higher level. That’s not to say the tracks not produced by Dean suffer in any way. Solo’s work on “II Many Niggaz” is a track that’s surprisingly head-nodding, despite stripped down bass that can only be heard and felt in the drum line. It works thanks to a clever layering of taps, washboard rips, cymbals, horns, pianoes and synths – each element giving the song added depth. The beats would be nothing without Z-Ro though, whose distinctively deep voice sounds deadly serious while rapping and yet uniquely refreshing when he sings the song’s melodious hook:

While Notorious B.I.G. may have called himself “the black Frank White” in the 1990’s, it really seems to be Z-Ro who has put down the concept best. Like fellow Screwed Up Click veteran Big Moe, his tendency to harmonize can be disarmingly charming; but Moe doesn’t have near the menacing nature that Ro does. It makes him rap’s true Christopher Walken, a smile on his face hiding the glint in his eye that means you could die in a heartbeat. Song after song is deceptively mellow throughout. Even when the song has a nasty sounding title like “I Hate U Bitch,” it can still be hard to catch from Z-Ro’s mild mannered musicality just how dangerous he really is:

“Trying to do all I can, but you act like you can’t understand
Well I done sacrificed, and I done swallowed my pride
On the wrong road, trying to follow my pride
I was daddy for a while, though I’ve got no seed
But the kids, are my H-E-A-R-T
I’ve been dealing with a lot, so I’ve been losing my mind
Straight up acting before I think, barely using my mind
My freedom is on the line, and my sanity’s gone”

As close as Z-Ro gets to revealing his dark side both musically and lyrically is the track “Everyday” featuring Trae from the Guerilla Maab. Produced by Mr. Lee, the song still has a friendly bop to it but also has a dark undercurrent of tension that Z-Ro exploits to full effect. What goes on “Everyday” in Z-Ro’s life, “The Life of Joseph W. McVey?” Well let him tell you all about it:

“My nigga Redd been assistin me with holdin my head
But I can’t focus cause so many niggaz in the street owe me some bread
And it be fuckin with my mind lately
How could it be greed if all I want is just to touch whatever’s mine baby
My forty-acres and my mule, my mansion and my yacht
Might take a little time for me to see bigger livin plus the knot
But I want stop until I’m clutchin my figures
You better move (bitch!) cause I be bustin my nigga
Nobody knows all the trouble I been through
Been so broke and embarrased couldn’t afford a tooth brush fool”

Would you fuck with somebody who couldn’t afford a toothbrush, who’s looking for the moneyYOU owe him? Hell nah. These details make Z-Ro a little more distinctive than the run-of-the-mill gangster rapper. Like Kool G. Rap, Scarface and Schoolly D before him, Z-Ro is not just bragging about a lifestyle, he’s talking about the good and bad consequences of gangsterism and painting provacative and vivid narratives in the process. With the bonus of several Screwed mixes dedicated to DJ Screw, this 15 track and 60 minute long album is an excellent introduction to a Houston artist who may have only been well known regionally before now, but is sure to blow up nationally soon enough.