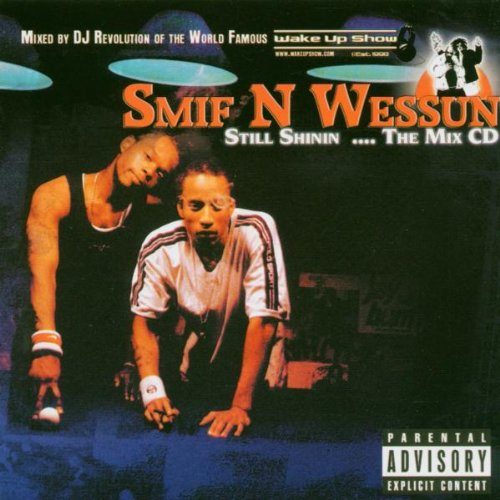 When looking back on what was right about hip-hop in the 1990’s, the rise of Duck Down Records and the Boot Camp Clik must inevitably come to mind. Like the Wu-Tang Clan, they were a crew of individual artists with one common goal in mind – put themselves on and reshape the hip-hop industry from the inside-out. Their revolution was kick-started by Black Moon and pushed forward by Heltah Skeltah, but the most intriguing of all the groups to emerge from the Boot Camp Clik had to be Smif-N-Wessun. Tek and Steele proudly raised their guns in the air and sounded the call for rap warfare on boring songs and mediocre MC’s. With their Stephen King inspired album title, “Dah Shinin'” may have mystified some as to it’s meaning, but Stanley Kubrick and Jack Nicholson could have clued them in. Smif-N-Wessun had come to shock, had come to entertain, and had come to rip open a new reality to the listeners. Thanks to the dark murky rhymes and the Beatminerz top notch beats, singles like “Bucktown” and “Wontime” became rap classics and “Dah Shinin'” went down as a classic of underground rap, a cinema veritÃ© for the mean streets of Brooklyn, New York.

Unfortunately just when things were starting to peak for Boot Camp, they simultaneously started to fall apart. Black Moon got in a nasty dispute with their label Wreck Records, and didn’t release a new album from 1993-1999 as they fought over who owned the name of the group. (That didn’t stop Wreck from releasing a “Diggin’ in Dah Vaults” album featuring all their singles, remixes and B-Sides in 1996.) Smif-N-Wessun fared little better, as they were slapped with legal challenges by gun manufacturer Smith & Wesson over violating their trademark. Forced to change to the Cocoa Brovaz, the duo persevered and even released “The Rude Awakening” in 1998, but Tek and Steele had already been overlooked by many outside the B.C.C.’s fanbase and the name change didn’t help matters.

While the Camp continued to spin off secondary and tertiary groups like the Representativz, the influence of the Clik continued to wane. 1997’s “For the People” offers some hope, but it would fade fast and wouldn’t be followed-up until “The Chosen Few” in 2002 – arguably a better album in many ways but nonetheless more obscure than the prior release, offering no big crossover singles like the prior Boot Camp release. The crew and the label still exist and big ups to them for doing their thang, but they’re no longer carrying the torch for hip-hop – it’s long since been passed on. “Still Shinin – The Mix” offers some hope for the resurrection of the movement. By reclaiming their original name and album title even if on a self-produced and released CD, Smif-N-Wessun are firing a shot across the bow of hip-hop. The message is simple – they intend to be more in the 21st century than “the group who did that Super Mario Brothers song.”

Mixed by DJ Revolution of the world famous Wake Up Show, “Still Shinin” doesn’t have much in the way of liner notes or producer credits, but it does come chock full o’ dope rap. Right away Revolution let’s it be known that this is a MIX and not a mixtape, stating that you won’t hear “no shout outs, no screamin over the music, it’s just gon’ be hot shit.” Indeed “Criminology” sets it off nicely, in a way that Raekwon could hardly begrudge them. Steele rhymes gritty street reality:

“Young G’s, born in projects, born without shit
Study in corner colleges, but few get out it
Applyin street knowledge, few felony charges
Hearts of men harden, condemned by the fathers
Judged by strangers, alleged gang-bangers
Species endangered, police want us in cages
Riot squad clutchin gauges, the ghetto’s blazin
The world’s a hood for the devil to play in”

Tek follows up with equal doses of menace and braggadociousness:

“I learned from the teachers and became a tutor
Applied what was me, and made you a student
Took you out on field trips, showed you the life
Pulled your coats that this good shit come with a price
Told y’all fam is first, sketz is next
Nothin move but the money that you gotta respect
Same as me, the 20 tatted Black Pacino
They’ll find you out in Jersey where they snatched up Nino”

Thanks to a stripped down militant beat, equally armed samples and DJ Revolution playing Premier on the lyrical re-scratch, the song evokes all the old memories of “Dah Shinin'” in fine form. To emphasize the point, the group tag teams this boisterous intro to “The Reason” as it melds with the prior track: “Smif-N-Wessun is the reason niggaz rap like that/Tek and Steele is the reason niggaz roll in packs/Cocoa B’s is the reason niggaz smoke the black/Bucktown – numba won reason niggaz roll with gats.” Say word. The blend is butter smooth, keeping your head nodding and keeping you amped to hear what Smif-N-Wessun have to say next. They don’t dissapoint. “Tools of the Trade” is so vintage it could be an unreleased cut of “Dah Shinin’.” You can’t help but be stirred by the personal narrative of “Family Portrait,” and appropriately enough it’s followed up by the proclamatory cut “Smif-N-Wessun’s Back.” After a couple of freestyles, it’s a reunion of the Click on “Boot Camp March” featuring Buckshot. He’s not the only guest though, as Talib Kweli raps a personal story in a cameo on “We Came Up”:

“2000 came and went, 2001 was crazy
People can’t deal, fashion go back to the 80’s
Got me thinkin bout my niggaz drinkin dark liquors
Sparks flicker in my mind, my heart quicker, think about the time
they tried to front on the kid, up in front of Medgar Evers
Nigga me and Juju, set to D, rolled up like whatever you wanna do
Damn, nigga Derek locked down
Seth held the spot down, wonder how long he got now, wow
If it happened today, who would ride?
My name Junior got shot, Ray committed suicide
Do or Die, changed to Do or Live, doin they thing
Rubik’s is in Atlanta, L.G. ready to bang”

Kweli can’t upstage Smif-N-Wessun though. They continue to hold it down through the second half of the CD, on songs like the understated “Money Make the World Go Round” and the self-explanatory “Who You Think You Fuckin’ With?” featuring Starang Wondah. Tek and Steele make no apologies for the gunplay of their lyrics or the harsh reality of their raps, but they don’t glorify the violence of it either. They are certainly not nihilistic, because Steele says it “Love Makes Life” clearly: “I’ve got one life to live, two reasons to squeeze.” They are not Johnny-come-Latelies to this style, they personified in New York gangsterism in the same era Biggie, Jay-Z and Nas came of age. In fact that’s the unfortunate reason Smif-N-Wessun have often been overlooked for their place in rap history. While this mix doesn’t go all the way towards restoring their cred, it’s a strong statement that Tek & Steele may be forgotten, but they’re far from gone. And as a nice bonus after all the dust settles, their Mario Brothers influenced rap song “Super Brooklyn” is tacked on near the end of the album. Fans of the Boot Camp and fans of the group alike will not be dissapointed by this “Still Shinin.” Indeed the duo clearly live up to the title – they’re “Still Shinin” in 2004.