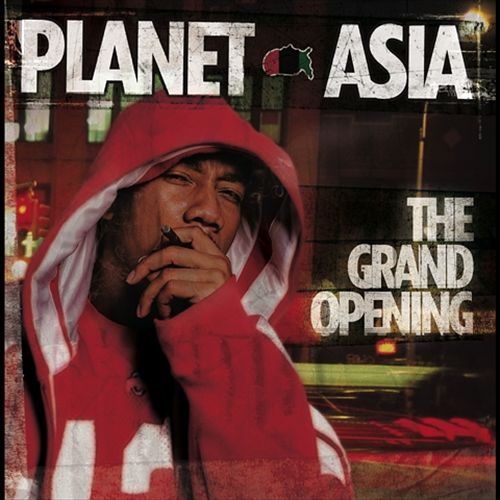 If there’s a West coast rapper with the fiery flow and intelligence of Nas and Akrobatik combined, it would have to be Fresno, California’s own Jason Green. Better known as Planet Asia, this verbal pugilist has been putting it down ever since his self-titled debut EP appeared on store shelves in 1999. Since then his orbit has kept him among the underground West coast elite, and mutual gravitational forces pulled him and fellow CA native Rasco into releasing “How the West Was One” under the name Cali Agents. Throughout the years Asia has remained fiercely indie, even though it was rumored (and even reported on AllMusic.com) that he had inked a deal with Interscope Records.

2004’s “The Grand Opening” emphatically proves that concept wrong. The album appears on Avatar Records, whose closest strike to mainstream so far was a soundtrack to the “Oz” television show. Generally speaking though, Avatar treads a road paved with singles from Mos Def, Official Pham and Black Moon. While it’s dangerous to pin any one definition on a label, Avatar seems equally as committed to underground indie hip-hop as Asia himself does, which makes their working together a natural match. His rap flow is eeriely reminiscent of the Wu-Tang Clan’s GZA, particularly in his earlier “Genius” days before the Clan blew up. If the resemblence in vocal tone and slight slur to his speech wasn’t already uncanny, hearing him duet with Ghostface Killah on this album’s “Real Niggaz” track may just push Clan fans over the edge. It may be an East meets West meeting, but Asia sounds almost TOO natural with Ghost:

“Yo, powerful rap robotic style off chronic to cosmic
Follow this flow from out the projects
My shine timeless, clique +Criminal Minded+
My time spent, knockin out daily assignments
The capacity of my writtens make y’all niggaz look mindless
In Mortal Kombat, I leave a challenger spineless
This five-five-nine shit, three strike off
Dirty cop killer music that the streets can absorb
Old souls run deep in my pores, your desperation
predate the Earth, formin the path of civilizations
Nappy academy, maunfactures the new slang
My singles be the jingle like, pockets of loose change”

Asia stays fluid on Supa Dave West’s intense track, matching horny horns with a sultry blaxploitation funk, and Ghost fits into the mix like a glove. Banging beats can be found throughout the album. On the aptly titled “Pure Coke” featuring Martin Luther, Orthodox and Limitless make shit hot. You can hear Asia blazing up an Evidence beat on “Right or Wrong,” peep him getting his “Paper Up” with Kutmasta Kurt, feel yourself get “Hypnotized” to an Ohno production or feel the Cali Agents renunion on the Architect laced track simply titled “The Greatest.” Rare is the underground album where too many cooks made the soup better, but in this case Asia seems to have chosen each beat personally and put his stamp on it with verbal puglistic attacks worth of Muhammad Ali. Even when things slow down a little on songs like “Upside Down” feature Goapele and produced by Vitamin D, Asia’s lyrics keep you nodding your head in approval and engaging your mind at the same time:

“And many different pedigrees sent from out the heavens to the chosen
So the struggle is maintain some integrity
And until it’s over, I shall remain a soldier
Like Aztecs with aspects that they govern, it’s on
Wanna live, you gotta eat from the tree
And reach the degree, the medicine for my peoples is history lost
And in religion, the mystery cost
Unofficially off brothers who be frosted mentally
Black man recognize the science of life
It’s all you, right and exact, it’s actual fact”

If you get the impression reading this review that Asia’s music can be a headdy brew, you’d be dead right. That’s no reason to sleep on Asia though, cause he’s just as willing to write odes to “Summertime in the City” as he is to make odes to his personal truth on “As Long as I’m Alive” – produced by J. Thrill and Jake One respectively. Asia’s deep intellect does not prevent him from making simple points the reader can pick up on. “Summetime” proves it when he says, “Right now I’m feelin cocky, but if you want some truth/well here it is, it’s not one man that’s bulletproof.” Asia describes himself as “book smarts with a bunch of the corner” and it’s 100% accurate. He’s the remedy for hip-hop fans looking for something that can be profound without being didactic. Asia matches the progressive West coast underground scene to great beats and produces an album that requires MC’s on both coasts to step their game up, and even if he never hits the Billboard top 20 he’s done something far more important – create art that’s smart AND refreshing.