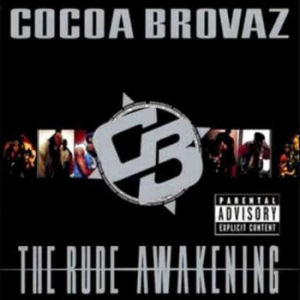 You know the epilogue by James Todd. Riding high on the fumes of their acclaimed 1995 debut “Dah Shinin’,” Brooklyn duo and Boot Camp Clik representatives (rather than Representativz) Smif-N-Wessun were slapped with a cease and desist from a certain Smith & Wesson Holding Corporation of Springfield, Massachusetts, forcing Tek and Steele to assume a new moniker before constructing their sophomore effort. Reemerging as Cocoa Brovaz in 1998, “The Rude Awakening” is a meritorious return to Bucktown, although their stage name isn’t the only alteration to the formula. The murky atmosphere and ragga inflections remain, but Tek and Steele are here flanked by an ensemble of producers spanning beyond the friendly faces of Da Beatminerz. For the opener “Off the Wall,” Shawn J. Period contributes a mid-tempo groove ripe with heavy bass and trumpet as Cocoa B’z discuss their predicament between guest spots from Professor X and Jahdan Blakkamore:

“I got subpoenaed by the government, the other day
I opened it and read it, it said they was suin’
Said I couldn’t move the way that I was movin’
And I couldn’t do the things that I was doin’
Causin’ mass confusion with the name that we was usin’
Said they gun sales was conflictin’ with our music
Sent me multi-paid contracts just to prove it
The trademarks on belt buckles, shirts, and knives
Ain’t that the most off-the-wall shit you heard in your life?
Probably heard his junior sayin’ ‘Mister Ripper’s in your area’
Feel your heart skip a beat as I’m nearin’ ya
I’m hearin’ ya, askin’ ya seed, who was me
At the same time you break my classic CD”

The duo pledges resilience over a relaxed Steele and Face N Triple Beam production “Still Standin’ Strong” but channel some energy for “Won on Won,” a single which originally appeared on the “Soul in the Hole” soundtrack in 1997.

If “The Rude Awaking” doesn’t boast the same smoked-out exuberance of “Dah Shinin’,” it reciprocates as a meditative and dare I say mature effort. After a full round of group efforts, compilations, and countless guest appearances, the B.C.C. shtick was quite familiar by ’98, and Cocoa B’z opt to forgo the toasts and “cessions” of the debut in favor of honest reflection over appropriately somber beats. Their capacity for the contemplative was suggested on “Dah Shinin'”‘s final act (“P.N.C.,” anyone?) and it’s a successful tactic on “Blown Away” and “The Cash.” The stellar “Game of Life,” an eerie exercise in street consciousness, features strong production from Steele and Suite, while “Back 2 Life” convincingly addresses the homies in the pen a la “One Love.”

The album sags in the middle as the slower tracks blend into monotony. Considering Tek and Steele are far from lyrical visionaries, some songs seem redundant if not insubstantial as they seek little more than to “K.I.M (Keep It Movin).” The Raekwon collabo “Black Trump” is a stale stab at g-funk, and “Dry Snitch” sounds like a Mobb Deep b-side.

Things get back on track with “Bucktown USA,” a darker take on the borough anthems of their debut, and although in most cases B.C.C.’s stabs at R&B collabos yielded discreditable results, “Hold It Down” is smooth without compromising their stance. The Eek-A-Mouse-aided closer “Memorial” is terrific, but “Myah Angelow” is the standout, a virtual masterpiece in late-90s solemnity produced by none other than Baby Paul with a superb Sean Price guest.

“The Rude Awakening” was a slightly tough sell in ’98. The dawn of the new millennium was the twilight of Boot Camp Clik’s stint with the major labels, and not unreasonably so: their appeal is subtler than the brash vehemence of M.O.P., the raw lyricism of Mobb Deep, and the pure charisma of the assorted Wu brethren. Between the lack of a clear single, the marketing difficulties posed by the name change, and its appearance among a thoroughly middling second round of B.C.C. releases including “For the People,” Heltah Skeltah’s “Magnum Force,” O.G.C.’s “The M-Pire Shrikes Back,” and whatever the heck it was Black Moon did after “Enta da Stage,” it arrived toward the end of their commercial viability and was a temporary death knell for the duo, who failed to put forth another album until 2005. Nowadays Smif-N-Wessun maintains a strong output and loyal following, and although “The Rude Awakening” is a bit overstuffed with skits and filler at 67 minutes, it’s more than just another Boot Camp affairâ€”it has a consistent, distinctive sound and features a rare turn for the introspective by Tek and Steele.