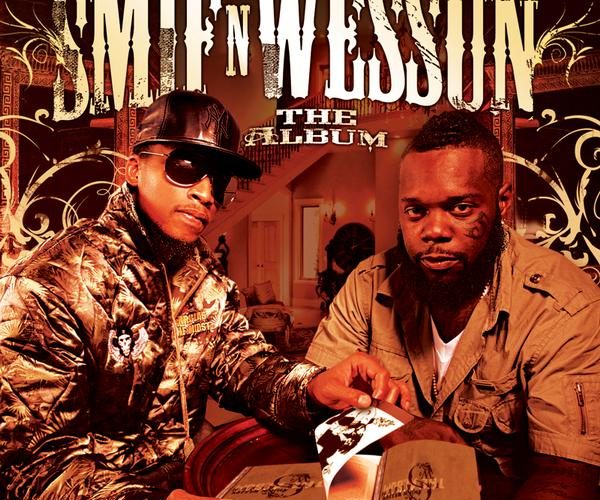 To my knowledge, no other genre of music has as many legal problems as hip hop. If rappers aren’t getting jail time for probation violations or weapons charges, they are facing lawsuits over illegal samples, suing their label to get out of shady record deals, or, in the case of Smif-N-Wessun, being sued by a major corporation over their copyright-infringing name. I’m not sure how Smif-N-Wessun came to a deal with Smith and Wesson, but on “The Album,” Tek and General Steele are back to their old monicker, abandoning the Cocoa Brovas name that they had adopted in the meantime.

“The Album” is their third record as Smif-N-Wessun, and comes twelve years after their classic debut “Dah Shinin.'” Those twelve years show in their flow and lyrical content. Smif-N-Wessun are not just a couple of young bucks boasting and bragging. They don’t abandon the gunplay rhymes that made them legends, and revisit those themes on “Gangster’s Prayer” and “Stomp Thru.” They also take time out to celebrate the good life on “Gotta Say It,” and getting high on “I Can’t Feel My Face.” Still, the majority of the songs showcase the rappers in a more thoughtful, more mature frame of mind.

“Trouble” sees the duo reminiscing about their rough upbringing, from a twin brother who died at birth to a childhood of crime and drama. “P.N.C. 4 Life” is a display of brotherly love; and “Who Gonna Save Us” examines the problems facing African-American’s, from the war to Katrina:

“We got casualties unthinkable
How does one survive
When he’s living where his water’s undrinkable
For years we sat back and watched TV commercials
About what five cents a day could do
And it’s been documented
Some gave, some didn’t
But in our country some of us couldn’t
So what’s the use of the organization
If the funds ain’t going to the proper destination
We living in the world of technology
Still we do nothing
To stop all these catastrophes”

They even get political, declaring “Obama, I stand beside ya/Gun in hand and body armor.” Hip hop may be a young man’s game, but Smif-N-Wessun prove that the experience that older rappers have can make their music more meaningful and interesting than their younger counterparts.

Those hoping that the duo would recapture the dark, hardcore NY sound of “Da Shinin'” will be disappointed. The sparse, cold boom bap of their debut has been abandoned here, in part because the Beatminerz weren’t involved in any of the production. The closest “The Album” comes to Smif-N-Wessun’s hardcore street sound is on “Who Gonna Save Us,” with it’s handclap beat and guitar flourishes, and “Stomp Thru,” which has a piano loop and stomping drums. Other highlights include the dancehall flair of “Gotta Say It” and the synth whine of “Yeah” and “Can’t Stop.” For the most part, however, the beats are drab and humorless, lacking any sort of personality. It’s not that they are terrible, they just aren’t memorable, and they leave Tek and General Steele’s insightful lyrics hanging. I really wanted to like this album more than I did, but in the end it just isn’t very enjoyable to listen to. Smif-N-Wessun are proof that rappers can in fact age well. They just need to find producers that can keep up with them.