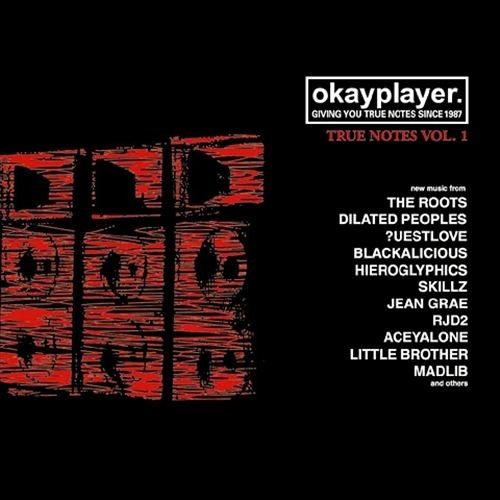 ?uestlove of The Roots could be considered one of the defining authorities on quality hip-hop music, with both years of experience under his belt and an eclectic resume of guest features and contributions to critically-acclaimed releases. While his day job is serving as both a drummer and a producer for rap’s in-house band The Roots, ?uestlove has managed to keep his ears open below the commercial radar to highlight fresh talent on his website, www.okayplayer.com. His opinions have been given solid credibility through his collaborations with Jay-Z, Eminem, and D’Angelo.

With substance slowly rising above style in 2004, thanks to artists such as Kanye West and Dilated Peoples receiving heavy rotation, it seems only right that the Okayplayer family drop its first official compilation, “True Notes Vol. 1”. Sporting a roster of predominantly unknown and up-and-coming acts, “True Notes Vol. 1” is an entertaining exhibition of pure beats, rhymes, and authentic rap music. Proud backpackers will be in audio heaven, while narrow-minded listeners will clearly hear just what makes underground hip-hop so special and worthy of larger attention.

The aforementioned Dilated Peoples team up with fellow California native Defari on “Okay”, a rugged selection blending organ keys, powerful guitar plucks and DJ Babu’s scratching abilities as the three MCs all deliver impressive verses. Skillz, one of the industry’s most neglected and mistreated rappers, checks in with his expected verbal boasts and clever punchlines on the bouncy “Take It Back”, while The Roots continue to construct amazing songs by contributing the darkly hypnotic “Y’all Know Who”, powered by Black Thought’s flawless lyrical performance. “Just What Can Happen” from the West Coast representatives Blackalicious induces instant head-nodding courtesy of dizzying turntable scratches and an energetic display by rapper Gift of Gab.

When “True Notes Vol.1” allows fresh talent to shine, this compilation becomes required listening for anyone claiming to support “real” rap music. 2003’s underground champions Little Brother appear with two tracks: “Shake It” and “On and On”. Both produced by the next big producer 9th Wonder, Little Brother show that they have improved on their already amazing gifts. The uptempo “Shake It” shows growth for the group, an uptempo number for party-going ladies that could fit perfectly in any radio station’s play list. The beautifully crafted backdrop heard on “On and On” inspires lyrical wizardry from both Big Pooh and Phonte, particularly Phonte who blesses the track with:

“They wanna know 9th, they wanna know Pooh
but they ain’t trying to know the crazy shit they go through
Like 4 a.m. in the booth recording vocals
or at the club watching fake niggas approach you
They wanna know ‘Te, the one that’s wild and crazed
not the nigga wit a child to raise
Not that nigga that’s dead broke and writes the page
to keep his faith through the long nights and face the stage
Niggas be eyeing me down
want to be my appetite for destruction but I’m dieting now
Want to see my team foul out or step out of bounds
so they can try to take control of the crown
But as long as fam is holding me down
it’s crunch time with a minute to go
I’m at the baseline stealing the show
And when I make a million or so, still ripping songs raw
cuz rap might decide it don’t feel me no more”

Jean Grae, arguably both the game’s best and most slept-on female MC, also flaunts two works on “True Notes Vol. 1”. Riding the same piano-heavy beat heard on Scarface’s “My Block”, “Keep Livin” sounds more like a freestyle than a new song, a minor discrepancy overshadowed by Jean Grae’s off-kilter flow and skillful words, while “Fall Back” finds her in full-hardcore spirit as she blazes the Wu-Tang-esque production nicely. Like the previously mentioned 9th Wonder, RJD2 proves why he deserves to have his incredible creations heard on “Act 2”, an instrumental offering that captivates ears with everything from violins to record scratches to haunting vocal samples.

The standout track on “True Notes Vol. 1” comes in the form of Nicolay and Supastition’s “The Williams”, a masterfully conceived track showing just how effective pairing a hungry MC with an equally focused new producer can be. Nicolay’s soulful and emotional beat brings to mind past Pete Rock and DJ Premier efforts, and backs Supastition’s narratives perfectly. Discussing the pressures of despising your job and constantly piling up bills (‘Williams’ meaning bills that have aged without being paid), Supastition excels with bars like:

“All my life they told me, ‘Save your money for a rainy day’
but I always end up buying things that take the pain away
From the bills that I can’t afford, permanent credit reports
And the rent that I turned in, the landlord said it was short
I’m staring at a stack of past-due bills
wishing I could repossess my own dreams, every time the phone rings
Bill collectors calling, and constantly coming after you
I change my voice so many times they think I’m supernatural
I said I’d pay you next week, talk about it when we next speak
The way you bill collectors call it’s difficult to get sleep”

“True Notes Vol. 1” is not without its flaws, though. The ominous and moody beat found on “I Do What I Like” is wasted with Dice Raw’s boring and uninspired vocals, while the teaming of Aceyalone and Madlib on “K.O. Player” results in an annoying mixture of cluttered production and sophomoric lyrical abilities. Las Vegas citizens The Chapter show promise on “For The Wreckord”, but placing them alongside The Roots brings to light The Chapter’s all-too similar line-up of an MC and his backing band, and may spark biting allegations.

With these few missteps being overlooked, “True Notes Vol. 1” is easily one of the strongest rap compilations to come out in recent memory. Bringing together a diverse ensemble of talent, Okayplayer has assembled an all-star underground mixtape, one that will most likely go unnoticed commercially while serving as a launching pad for some promising new artists. In a perfect world, acts like Jean Grae, Little Brother, and Nicolay and Supastition would be headlining major-label soundtracks, but this is far from a perfect world, so platinum-repelling albums like “True Notes Vol. 1” are must-purchases.