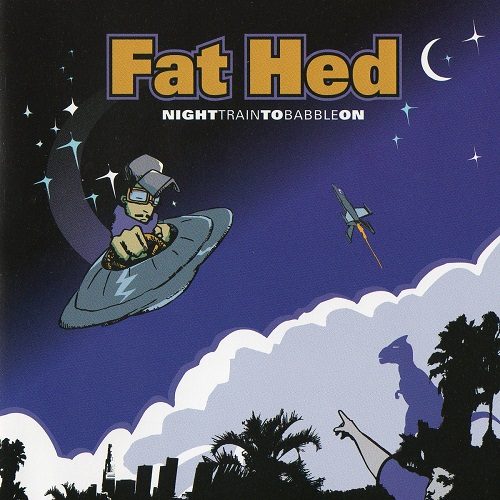 Fat Hed is not the best rapper. Much of the time he sounds like he’s freestyling, and his airy space themes don’t exactly shatter hip-hop conventions. The beats are spotty, to say the least. He decides to croon several of the hooks, despite the fact that his voice is nasal and occasionally off key. And yet, I can’t get “Baby Pea” out of my head. The title track, as well, has been running laps through my skull all day long. Fat Hed’s singing style is oddly captivating. “Do What I Gotta,” the opener, has him belting out:

The beat, courtesy of Nocturnal Ron, jumps around the spectrum with uniquely staggered drums. Unfortunately, despite his distinctive voice, Fat Hed’s rapping lyrics just don’t deliver. What really makes the song function is the hook. His harmonizing is SERIOUSLY catchy.

The aforementioned “Baby Pea” features Hed delivering the goods again on the hook. His verses leave something to be desired, though:

“5 songs, that was our last EP
This year, we’re coming for the full-length LP
Get the cheese, get the provolon-ey
Don’t need alimony
’cause I’m single and I mingle
When you hear this funk jingle
You call it a fingle, a fingle fangle
Stand on stage, my nuts dangle”

Occasionally he drops a gem, but mostly there is nothing remarkable in what he has to say. “Pea” is brought together when he sings “baby pea, baby pea, you make me so happy, ooh ooh ooh ooh ooh.” My roommate has remarked that he sounds like Kermit the Frog on the “ooh ooh” part, and this isn’t entirely untrue. That sounds like an insult, but somehow, it pleases the ears. Credit is due also to DJ Fred C’s smooth production, which complements the peculiar vocal talents Fat Hed exhibits.

The likes of “Baby Pea” and “Night Train to Babble On” will have you seriously feeling Fat Hed’s style. Most of the worthy material within “Night Train To Babble On,” however, is found in the first half. The music is great, thanks to the likes of Kutmaster Kurt and Nocturnal Ron. There are also a few choice guests to keep the monotony of 14 tracks of Fat Hed’s conversational rapping at a safe distance. On the downslope, though, things fall apart.

The formula begins to wear thin with “Spanish Fly.” There is a rough beat and a sub-par hook, and Hed isn’t the type of emcee who can rise above those odds. From here on out, only one song is notable. He resorts to battle raps a little too much, and with his slow flow and average verbal skills, nothing stands out. Even his refreshing off-rhythm singing vanishes, replaced by the typical chanted chorus. Nocturnal Ron and DJ Fred C stop bringing any sort of fire. They try to fit in with the “space” premise, and this has an adverse effect, as the production gets increasingly strange as the album goes on. Without the ill hooks or bumping beats found on the first half, it is a rough trip.

This record starts off well. Fat Hed’s weird style is complemented well by his singing, and the beats are quite catchy. There is really a nice, cohesive feel to the beginning of “Night Train To Babble On.” The production isn’t extraordinary, but a combination of pianos and smooth samples gets my head nodding. Funky beats plus off-kilter singing definitely equals cool music in this case. Without either of those elements, though, Fat Hed is left alone, and he can’t carry an album by himself. I kept fiending for more of the groovy harmonizing in between verses. With only 12 actual songs, this definitely could have been an excellent EP. It just won’t work without adequate production or Hed’s Kokane-esque wailing. Don’t get me wrong, there are some excellent songs on this record. The catchy hooks disappear, though, and the leftover music is simply too nondescript. This “Night Train” is worth a look due to a precious few joints, just don’t expect too much from the album as a whole.