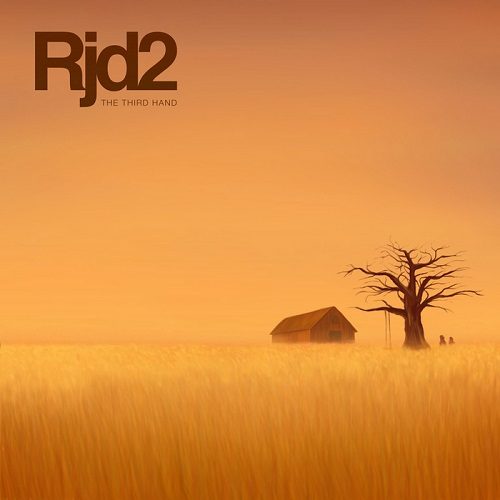 You’ve heard the rumblings, the rumors, the whispers on the winds of cyperspace. Maybe you’ve even Things Go Better with RJ and Al” and Aceyalone’s “Magnificent City” not to mention his own funky solo albums like “The Horror.” If you asked me to describe RJD2’s hip-hop beats, the word “genius” instantly comes to mind. Why would a genius disavow his own art though? Madness? Well they say that both Johannes Brahms and Peter Tchaikovsky destroyed as many works as they created, and it’s hard to argue either was mad – their timeless classical compositions are still enjoyed to the present day. Maybe RJ isn’t so much “going rap free” as has been reported but freeing himself from a narrow interpretation of music. It’s still possible to be hip-hop even if you don’t call it such, and not all dope beats need to have rhymes. RapReviews.com has covered plenty of instrumental and turntablist albums – it’s all good.

Is it though? I’m hard-pressed to really describe “The Third Hand” as a hip-hop album, even if I’m being completely generous and giving RJ the benefit of the doubt twice over. There are a few hints of the RJD2 we know and love here and there on this album – “Beyond the Beyond” has the certifiable boom bap beat and spacy instrument orchestration that are by now his trademarks. Those moments drown in a sea of self-indulgent musical masturbation that goes beyond odd into downright irritating. RJ fancies himself a singer now, and things do NOT go better when RJ lays down vocals like this. “You Never Had it So Good” might work if Cee-Lo Green was the one busting the notes, but either RJ sings entirely with his head voice or he just has a naturally thin and weak vocal chords – probably both. He’s drowned out by the pianos on his own song, seems lost as to how to convey genuine feeling with his voice, and is left to try and imitate other singers in the hopes he can capture their magic. I’ve got news for you RJ, being inspired by John Lennon is not the same as being LIKE John Lennon. There’s genuine irony in this statement, since I’ve often said I would buy an RJD2 instrumental of any rap album he produced, and now I find myself wanting an instrumental of his own album just so I don’t have to hear his voice. He RUINS a perfectly good instrumental by crooning on “Have Mercy,” and what I wouldn’t give to hear Aceyalone rap on it or DJ QBert scratch on it.

If RJD2 were just ruining his own good beats with his singing I could still recommend “The Third Hand” on a musical basis, but a lot of these tracks aren’t any good either. “Work it Out” starts out perfectly fine at a slower tempo, but RJ feels the inexplicable need to speed it up until it sounds like really bad pop music. Even worse is “Laws of the Gods” – after mumbling incoherently over a beat that seems better suited for a Renaissance Faire, RJ suddenly screams out “lazy man, you broke the LAWS OF THE GODS” on the hook. Some law was definitely being broken while this song was made. RJ seems in fact to be challenging his former hip-hop fans with song titles like “Get It.” Quite frankly, I don’t get it at all. I don’t get his obsession with repetitive, overproduced synth sounds on “The Bad Penny.” I don’t get why so many of these songs have the exact same tempo, as it seems you could blend “The Bad Penny” with “Rules for Normal Living” without even trying. It’s as though RJD2 went into the studio, punched a few buttons, decided to noodle around and just happened to record the results figuring he could shop it around as an album and someone would take the bait. Someone did – XL Recordings. Gentlemen, shame on you.

If you didn’t believe the hype before now, or like me simply didn’t WANT to believe, let there be no doubt about it – RJD2 is on his own shit now, and it’s definitely not going to work for the majority of hip-hop fans let alone people who come to a website called RAP REVIEWS. I strongly questioned the wisdom of even writing this one up, but for a man who produced so many genuine Nines over the years I felt he deserved the benefit of the doubt. With that aside let me be perfectly blunt – if you liked anything RJD2 did in the last ten years DON’T PURCHASE THIS ALBUM. It will forever tarnish everything you ever liked about him, as you will suddenly view him as an eccentric crackpot who is more interested in making “Paper Bubbles” than good music. If RJ wants to do pop now, that’s fine, but if he can’t do good pop then he should never have “gone rap free” in the first place. Without hip-hop he is totally lost.