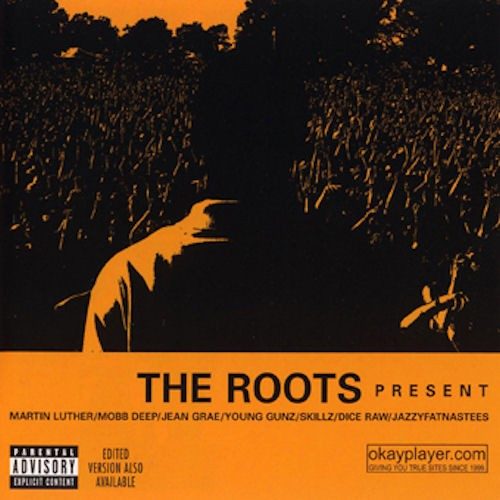 For your entertainment pleasure, “The Roots Present” is available on either CD or DVD. Stop! Hold up, wait a minute? If this is just a compilation of various artists, why would they make a DVD for it? When you look at the tracks “presented” on this album, either online or when it’s in your hand at the store, the story starts to become more clear. Young Gunz “Friday Night” and “Can’t Stop, Won’t Stop” aren’t really new tracks. Mobb Deep’s “Burn” dates back to 2001. “Nod Factor” by Mad Skillz is even older than THAT – we’re talking mid-1990’s. So what exactly are The Roots “presenting” on this album?

Simply put, “The Roots Present” is a live performance recorded and produced by The Roots in June of 2004 at Webster Hall in Manhattan. The guest list of artists who participated was handpicked by The Roots so lots of Okayplayer family like Jean Grae, Jazzyfatnastees and of course The Roots themselves are represented. Surprisingly it’s the latter, well known for their energetic live shows, who seem to turn in the most lethargic parts of this set – or at least they may not translate well on CD and may come off better if viewed on the DVD. Needless to say if you already own “The Roots Come Alive” their contributions here don’t exceed it and their performance of “The Next Movement” is not better than the one you’ve already heard.

That’s not to say there aren’t plenty of entertaining songs here. You may think of “Toxic” as a Britney Spears song, but the Jazzyfatnastees put their own funky and energetic spin on it, and really put their own stamp on it. Jean Grae is as powerful and soulful live as she is on her records, and really has the crowd in the palm of her hand on “What Would I Do” and “Clap.” Being that it’s a New York crowd, they’re absolutely psyched to hear “Shook Ones Pt. 2” and “Burn” performed live, and even the normally mellow Havoc and Prodigy sounds tightly wound. Even Big Noyd shows up to perform his verse in the latter, which is exactly as it should be. The album is closed by a an all-star revision of The Roots classic track “Clones” with Skillz and Jean Grae joining the large lineup to perform parts of their own.

In the end the album is something of a mixed bag. While the abrupt seperation of tracks is appropriate if the intent is to make the presentation more of a compilation, it does tend to ruin the “live performance” feel this album should have had. Whether musically relevant or not, we should have heard the entire performance from start to finish with all the bullshitting and crowd interaction that went along with it. It’s not hard to chapter a live album done this way so that the track selection still matches up to individual songs – again we have “The Roots Come Alive” as an example. While the list of guests is good, the crowd is clearly into it (although they’re often mixed too low for a true “live” feel) and some of the artists really shine here, “The Roots Present” feels like a good concept that didn’t quite achieve it’s potential.