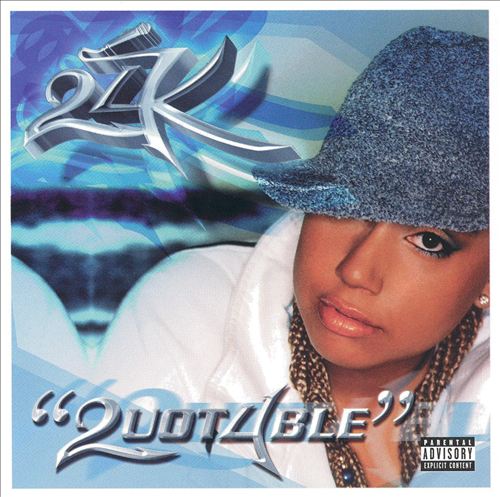 My first glance at the cover and booklet of “Quotable” makes me somewhat sceptical of the music that’s going to be on this album. Pictures of 24K the Canadian-born, Brooklyn-based rhymer/professional boxer looking suitable “gully” don’t particularly inspire me with great confidence but, as the ol’ saying goes, you should never judge a book by it’s cover.

Clearly my initial misgivings weren’t or are no longer shared by a number of important people in the world of Hip Hop, given that 24K has managed to enlist the help of the likes of Doug E. Fresh, Sadat X and countless big-name producers for this, her first album on Madd Records. Doug E. Fresh provides a beatbox introduction for 24K, who begins her album with a verse that introduces the themes of her album and nods its head to Hip Hop the art form.

In vocal terms, 24K is what you’d expect from the image her photos convey: she delivers lyrics with a thuggish grit that at times seems a little forced and assumed, but which is reflective of the rhymes she constructs. The other twang noticeable in her voice recalls her days as a dancehall emcee, before she turned her focus to writing Hip Hop verses, and the rhythms she chooses for her speech frequently echo this history also.

“Whatcha Sayin’ Now” (produced by Cool & Dre and featuring Tha Madd Scientist) is vaguely reminiscent of Missy’s “Get Ur Freak On” both musically and lyrically, but makes for an interesting â€“ if sparse track, and a good first full song for the album. As the Just Blaze produced “Skully” follows it a few tracks later, however, a 24K in search of a man is beginning to sound a little too much like the bad, bad bitch she’s clearly trying to look like on the back of the album cover:

“2-4’s the name I like em gully;
tim boots blue jeans and a skully
Steel fists body frame and a nine-milli
when I’m locked he got the balls to free me
Put your two-way next to mine papi
You a thug can you make me happy?”

This persona develops as the tracks pass and 24K makes it clear that anyone who chooses to fuck with her, her friends or her thug is apparently likely to end up on the receiving end of a bullet. Needless to say, this doesn’t particularly make for groundbreaking music or hugely enjoyable listening which is a shame, as tracks like “Punks Still Jumpin’ Up” (produced by Da Beatminerz; featuring Buck Shot, Sean Price and Sadat X) and “Clak-Clak” (produced by Ayatollah; featuring Tha Madd Scientist), which follows later, are fairly good tracks in themselves, but are a little tiresome in the context of the rest of the album’s gangsta-posturing.

Credit where credit’s due, however, 24K is far from being an amateur on the mic. At moments on the album she takes the stance of being a positive role-model for female rappers: the antithesis of Lil’ Kim who she brands “Porno Kimmy”, and her strong-minded, independent-woman attitude is conveyed well through her verses. It’s simply that she frequently takes the imagery too far, overstepping her exposition of female strength with threats of physical violence. Alhough they may not make for the most sonically-enjoyable tracks on the album, 24K finds a successful voice on “Invisible Baby Beauty” and “Rico”: the former considering a woman who allows herself to get pregnant as she thinks that’s what her man wants, and is then left considering the harsh possibility of an abortion when her man changes his mind; and the latter discussing a woman’s blind love for a man who treats her with no respect. It’s at these times when 24K lowers the hardened, assumed front which is present throughout so much of the album, and actually succeeds as a talented lyricist:

“What would you name her? I know you been brainstorming for days
I know you’d teach her the world; you’d be at all the school plays
Would she like to wear hats like you? Her favourite colour blue
red of yellow? When she wants to date, what would you do?
Is she worth your education, such a beautiful creation?
All of a sudden, he ain’t trying to hear ‘building no foundation’
Met him a while ago at Doctor J’s right by Flatbush –
mde promises to you he’d be there when you push
He was quick to buy you outfits even liked to stay all night
In the morning he’d still be there bringing you Sunny Delight
sunny-side up; your favourite. The fist dude you dated
now you’re feeling that maybe you should’ve waited
You’d share the world. He couldn’t wait to have a baby girl
Called you his precious pearl: the baddest in your borough”

Moving on to what are the most sonically-enjoyable tracks on the album, the ponderous chords of “Fallen Soldiers” (produced by Dart LA; featuring Tragedy Khadafhi and Mr Ruck) â€“ the subject matter of which is fairly self-evident â€“ and “Peel Off” with a chorus from Mashonda and Swizz Beats’ beeping, upbeat production are probably the two musical high-points among the twenty-four tracks and (fairly grating) interludes on “Quotable.” In the future, 24K may well prove herself to be an artist to look out for, and her ambition to be considered a dope rapper, and not simply a dope female rapper may well give her the determination to turn that hope into a reality. Before then, however, she needs to learn to embrace her more poetic moments, and put less emphasis on being the baddest bitch in the industry here to take out (what she perceives to be) the trash. “Quotable” at times isn’t a bad listen, but at others, it’s very trying on the patience.