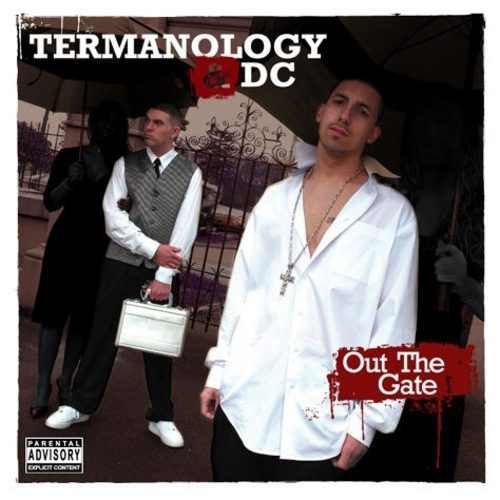 Termanology and DC :: Out the Gate

There’s a lot to like about “Out the Gate,” the virgin effort from Massachusetts rapper Termanology and his producer DC the MIDI Alien. There’s also, unfortunately, a lot for the not-easily-impressed critic to pick apart and find fault with. The end result is an admirable effort crafted by uniquely talented individuals that would have severely benefited from a trimming down. I’ve encountered this before in underground hip-hop: the aesthetic decision seems to run along the lines of, “Let’s cram all this shit in there, and people like what they like.” But this album is 73 minutes long, and about 25 minutes is redundant and boring. The rest ranges from good to great, and the end product is wholly uneven.

This is particularly frustrating here because I like Termanology. I like his sing-songy flow that on occasion turns menacing, his penchant for laying his vulnerabilities out raw a-la-Eminem, and even his tendency towards sappy nostalgia. As a matter of fact, one of the most confusing aspects of this record is that even when shit got incredibly mawkish, naÃ”ve, and simple, I couldn’t hate. Term has that effect on a person. His sincerity shines through both the music and subject matter. It draws the listener in very deeply, and almost, ALMOST, makes you forget that six or seven songs sound strikingly similar. Credit this to his vocal stylings, a unique mix of low-key monotone talk-rap and guttural, urgent whispering.

Take “Circle of Life,” Term’s ode to his young daughter. I’ve listened to it four times already, and I still can’t decide if I like it or not. On the one hand, none of it sounds forced or fake, and Term lets himself get swept away by the general loveliness of it all. He’s like George Carlin playing the conductor on Shining Time Station, aware of how ridiculous this is all is but not caring, just throwing himself full force into the music. But this song, and a few others, IS pretty ridiculous. It’s every “I Love My [Female Family Member]” track every rapper has ever produced. Memories of the night Wifey gave birth? Check. Regrets as to the status of current relationship with Wifey? Check. Assurances that daughter will always be taken care of? Oh shit, check.

The same problems are inherent when Term talks about how rap “used to be.” I’m newer to this game than Termanology is, but surely even “back then” (which to Term is the late eighties, early nineties) rap had its problems? Surely some of it sucked? I appreciate DC the MIDI Alien sneaking in subtle musical shoutouts to such hits as Queen Latifah’s “U.N.I.T.Y.” on the sonically superior “This Is Hip-Hop.” That song, despite overly fetishizing earlier hip-hop culture, works really well, again due to Term’s charisma. But did we really need it again with “When We Were Kids”? We also get two My Life cuts (“22 Years” and the bluntly named “My Life”) and another Love Your Family cut with “Mommy, Daddy, Grandma.” Remember, this album is 72 minutes long. These should have been left on the cutting room floor.

(I have one more quick gripe that should have been fixed in editing: at the very end of “My Life” Term calls himself a “new school Slick Rick with no jewels.” Then at the beginning of the next track, “Ain’t Gonna Be Rich,” he urges us to “check out my jewelry.” Come on now! Nobody noticed that?)

But like I said, Termanology often really impresses, especially when he radically alters his usually calm and reserved flow style. I certainly don’t want to harp on the negative here, particularly because most of it could have been retooled and fixed fairly easily. The aforementioned “Ain’t Gonna Be Rich” is a strong posse cut featuring a scary, raspy, stuttering Termanology next to quality guest rappers. “Takin’ You With Me” is one of the few cuts on which DC’s beat jumps out and grabs you by the throat. It’s a sly interpretation of a minor piano riff, and it undoubtedly mirrors other classics of threat-rap like “Shook Ones,” even allowing the usually gentle Term to threaten violence against assorted baby-mommas and grannies. “Motion Picture” is musically subtle, but takes a surprisingly mature position on the inherent difficulties of the recording industry. “Ready” even features fellow Massachusetts emcee Esoteric, of whom this reviewer is a big fan, placed over a thumping background emphasizing beats two and four. It’s really a great song.

So in the end, Term won me over. There’s definitely some baking soda cut into the pure and addictive good stuff, but that seems to be a symptom of overreaching and definitely not a comment on talent. “Out the Gate” might inspire listeners to hit the skip button a few times, yes, but it contains enough raw ambition and emotional nakedness to make it worth your while. Maybe these young rappers just need a heartless critic in the editing booth, forcing them to do their best with witty bon mots and piercing sarcasm.

Okay, that’s the last thing they need. But you know what I’m saying.

Termanology and DC :: Out the Gate
7Overall Score
Music6.5
Lyrics7