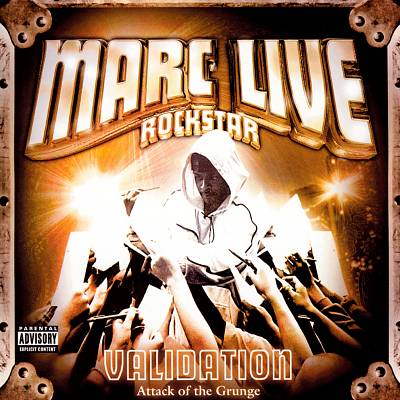 Marc Live is searching for validation. He has released two albums as part of Raw Breed, he formed the Analog Brothers with Ice-T and Kool Keith, and has also produced on Kool Keith’s solo efforts. Despite this, he doesn’t feel like he is getting the respect he deserves. He sees others claiming the fame that he believes should be given to him. This goes a long way towards explaining the title of his debut album, “Validation: Attack of the Grunge.”

After a short intro, Marc begins to state his case. The first song on his album is titled “Welcome To My World.” The hook explains where he’s coming from:

“I’d like to welcome you to my world
my whole circle, my whole click
my whole life, my big story
the drugs, the women
the evil we go through
the money, the truth
the ghetto I owe you”

So there we have it, Marc Live in a nutshell. The interesting thing about the opener is that it features 50 Cent, making it hardly Marc Live’s world at all. Despite this, the track Arial Caban cooks up is very tasty, with elements of the “grunge” that Marc speaks of in the title. Neither emcee steals the show, though 50 Cent’s verse is considerably better.

“I’m Not Happy” could have been the title of the album. Instead, it is the title of the best song on the album. Following “Welcome To My World,” the self-produced track features the standard epic orchestral production, with a killer electric guitar in the waning moments. What sets it apart is Marc Live’s performance on the mic. He obviously isn’t happy:

“You’re not a friend of mine
you a sucker nigga
I hate it when I see a bad bitch
just chillin’ with an ugly nigga
A soft rapper
yo, he’s thinking he’s hard
and the music channels
they tell him he’s God
listen, nobody says a thing
I hate it when the whole industry follows a trend”

Coupled with his distinctly gravelly voice, the lyrics paint a portrait of an artist that is furious at everything, and he doesn’t shy from explaining why.

Unfortunately, the focus his anger lends to “I’m Not Happy” is lost on the rest of “Validation.” References to drug-dealing, guns, and other unsavory subjects pop up everywhere. With a better lyricist, this type of subject matter can be entertaining, but Marc’s rhymes just can’t carry the material. There is no wit or charisma to be found, and the result is a collection of vague, faceless tracks.

The songs that succeed do so because of the production. “Where’s Your Hustle?” survives in spite of the clunky chorus and sub-par lyrics. “Clayborne Family” has a sick piano loop, and the heavy drums and flutes of the title track fit perfectly together. The other beats, nearly half of which are done by Marc Live, are solid. In between the occasional atrocity (“Superstar” for example), each cut is well-constructed and fairly catchy.

Besides having a natural voice for the job, Marc Live doesn’t amount to much of an emcee. There is far too much rough posturing and far too little substance. To make matters worse, nothing is delivered convincingly. This is really too bad, as there are plenty of nice beats that go to waste here. If they had been lent to someone more talented, things would have been different.

By the end, we really don’t know much about Marc Live as a person, except that he is a gangsta who resents other emcees he deems less talented. Some good production goes to waste along the way, as Marc’s rap quickly gets old. Only a few joints contain the focused ranting that would have made “Validation” possible. Even the star-studded guests can’t fix the lyrical content. It looks like Marc is going to have to search for validation somewhere else, because he isn’t gonna find it in his debut.