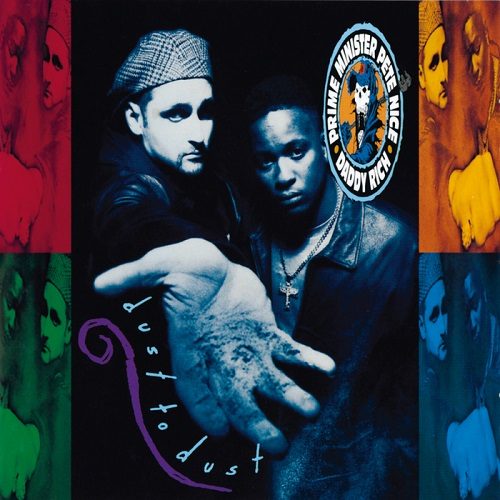 The early 1990’s were in many ways a depressing time to be a fan of hip-hop groups. EPMD went their seperate ways. N.W.A was all but dead after “Niggaz4Life.” And 3rd Bass, the vanguard of righteously funky raps in a surprisingly vanilla shell, had broken up over the usual bullshit about “creative differences.” Spin it any way you want but the truth is the two couldn’t stand each other any more and thought they could do better all on their own. MC Serch was the first out the gate with his solo album “Return of the Product” in 1992, but Pete Nice wasn’t about to be left in the dust. In fact the man hip-hop heads knew best as the Prime Minister had an ace up his sleeve – the Secretary General of turntablists, Daddy Rich (a.k.a. DJ Richie Rich) from the Land of 1210’s. The group obviously couldn’t split their DJ down the middle and each keep half, so Rich threw in his lot with Pete Nice to try and rebuild their audience from the ground up.

In 1993 the Minister came back swinging hard with “Dust to Dust,” his first appearance on the scene since 1991’s 3rd Bass album “Derelicts of Dialect.” Right from the start of the album Pete Nice was out to prove he was more than just glue sticking his former group together. Quite literally, he was Nice in his own right. Enlisting the Beatnuts on production throughout the Prime Minister kicked off the album using one of their tracks to set the hip-hop mood off right. With a hip bass swing and some decidely psychotic “Silence of the Lamb” samples, “Rat Bastard” could even be seen as a veiled message aimed at MC Serch:

“Diggedy you remember the night that I met cha?
I dismembered your limbs and fed ya
Applesauce, pork chops, and beans
No cigarettes, ya know what I means?
Wind it up, wind it up on the binge
You’re readin my lips on a lunatic fringe
Hinges swing, so I swing my cleaver
Straight for the crotch, I +Leave it to the Beaver+”

Psycho Les of the Beatnuts does have a guest verse on the song, but the most memorable part of his rap is that he paraphrases some Rakim lyrics. Nevertheless it’s a good warm up for “The Sleeper,” a deliciously funky self-produced track that borrows both from “The Gift” by Velvet Underground and from the X-Clan in the form of Professor X’s trademark “AHHHHH” sound. While the first track set a hardcore note that Pete Nice ain’t no joke, this track gave him more room to be whimsical, reminding the listeners not to ignore the Nice contributions he’s making to hip-hop:

“Wilfull wishes, all hoes and bitches
You got a little tipsy and forgot about the misses
Slept and you slept and you slept on
10 feet under, now you’re passed on
I caught you lunchin, yo, here’s a No-Doz
Eyes in the back of my head, surveillance photos
I run missions, listen to the word pass
Guess I gotta smoke you like smoked glass (Woof!)
If you wanna snooze, just kick off your shoes
Get a new attitude, not a qualude
I bring it like a hooker out roamin
I’m fierce like a pitbull foamin”

The musically adventurous duo of Pete Nice & Daddy Rich obviously decided to dig into the crates for “Dust to Dust,” and they come up with a head-spinning array of samples. It was obviously not quite so expensive or legally complicated to get loops back in the day. On “Kick the Bobo” the EPMD sample isn’t even credited, although “Inside Straight” by The Cannonball Adderley Quintet certainly is. Not surprisingly you will hear some horny-horns in the mix, but the simmering track underneath has as much buzz as Wu-Tang’s killer bees. Nice is definitely not aiming for a crossover audience here:

“Wisdom fatter than Buddha
Ain’t a heroin shooter or a storefront looter
Truer than a polygraph, walk with the big staff
But yo I got tricks up my sleeve you never thought I had
Do you like Muhammed Ali, doin Liston
Take you to the cleaners like the pants that you pissed in
It’s in poor taste why you’re so busted
I got loot like a frank got mustard
Yeah, you run games but you ain’t got equipment
All you got is kneepads for the sippin
I’m flipping you like Marv Albert on a slow-mo
The Prime Minister kicks the Willie Bobo”

Many had written off 3rd Bass as washed up white boys whose time had come and gone – although to be sure the melanin tone of Daddy Rich had always given them more cred among the skeptical. Some would accuse Pete Nice of writing “The Lumberjack” as a pay-off to Rich, but really it’s nothing more than the time honored tradition of giving your DJ props. Even Run-D.M.C. had a song called “Jam Master Jay” back in the day (R.I.P.) so there ain’t nothin’ wrong with this song, where an Albert King loop and some hilariously appropriate samples turn Rich from man into myth in the chorus. “You know, a judo, a chop chop chop” raps the Chubbster (word up). Ice Cube kicks in with the words “swing swing swing, and chop chop chop” and you know what it’s all about – Daddy Rich cuts on turntables like a logger cuts wood:

“Bustin off shots in the backyard of Brooklyn
Jocked by the hoes, only hoes that’s good lookin
He move crowds overseas, even immigrants
Seen him in his 300 Benz with the tints?
Think you want to step to the Lumberjack
That’s what you think, but you must be bummin cracks
Could you place your ass in a DJ recepticle
While the Lumberjack can just chop off your testicles (AHH!)
You want to get with the master chopper?
Better get a kung-fu to the little grasshopper
Heard your cuts and your cuts is kinda sloppy
Better get your ticket, watch the Rich get choppy”

Personally my favorite track on the album is Sam Sever’s hip-hop masterpiece “The Rapsody (in J Minor).” If you’ve never heard a rap song with Iron Butterfly as the backdrop (think “In-A-Gadda-Da-Vida”) then you’re in for a real treat. Of course no rhapsody in J minor would be complete without the smoky sounding sample of KRS-One for the chorus, saying “The J” over and over again, lifted from his seminal classic “Jimmy.” This song funks, rocks, and slams all without the help of Onyx – just Rich on the wheels and Nice flipping lyrics like pancakes:

“Back in ’86 Rakim hit “The Melody”
Ever since then shit jumped off steadily
Still counterfeits run frauds plus felony
When I’m on the pavement, people out tellin me
‘Yo, you got the swollen up, mad man musical
style, plus loops, loops quite suitable’
Never half-step, neither semi or semi
Aye aye Skipper, the Professor, he’s a swell guy
Wanna step to the drama over hit-and-run
Yo, you’d be out before I say Jack Robinson
Swig it, not a biggot like Archibald Bunker
Six pack of soul, there she blow, yo I sunk her
Dunk her like a stout, and my head got foamy
Took her like the Japanese took over Sony
‘Lost in Space’ with the crumb Dr. Smith
I got Elroy Cohen sayin (I smell a hit!)”

What might be surprising to some people is just how much flex seminal rappers have on this release, and that’s not just from the Beatnuts making contributions with occasional tracks and raps. Kurious Jorge gets his first major exposure on “3 Blind Mice” a year before his solo album “A Constipated Monkey” hit store shelves. What’s even iller is that over a half decade before Cage made “Agent Orange” famous he can be found spitting psychotic raps on “Rich Bring ‘Em Back” – certainly proving that it was his style all along and not a gimmick as so many think:

“My cuts are hell! Leavin hookers strung up by the ankles
Stripped in meaty chunks, all that dangles is they bangles
From a certain angle she’s resemblin my momma
I’m in it for the trauma, no comma can force my bomber
I Timberland my limbs when I stick pins in my kids
A fistful of maggots ain’t even my sickest habit
Blood spatter my chest, flesh between my teeth
I feast like I’m a vulture, destined cannibal culture
So check this, you get to be another dead miss or mister
With the pistol up inside your sister’s belly
The master of a million molest Phillies
Don’t even try to breathe or I’ma blast your ass to jelly”

This sixteen track and nearly hour long album is full of a lot of underrated gems that many people may have missed out on if they’d already written off Pete Nice’s contributions to hip-hop post-3rd Bass. While this may have been his one and only solo album, it’s certainly good enough to prove that there really was no “weak link” in his former group. All the members were talented in their own right, it’s just a shame they couldn’t put aside their differences to keep making dope albums for years and years to come. Still you can add “Dust to Dust” to the 3rd Bass legacy, is it makes one hell of a closing chapter to their book of rhymes.