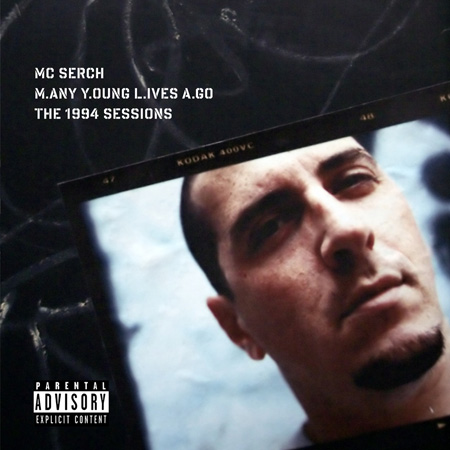 “I heard you had a police record, oh I see
Is that on tape or CD?
Cause every breath you take, is mad fake
You ain’t Sasquatch, front ya Loch Ness, Camp Crystal Lake
In a Park called Jurassic; what’s real
is beats, wannabes and fiends fightin for the glass dick
You kick the truth but it ain’t actual
So next time you come out your mouth, say somethin practical”

There was a time when for a time MC Serch wasn’t ahead of his time. In those times of time past, Serch was time and again the first and the last white rapper who would kick your ass, both physically and lyrically. While other aspiring mic pugilists got judged as not even being contenders on the basis of their skin, in large part thanks to Vanilla Ice, Serch was nice before it even became an issue. The Queens, New York native had years earlier formed 3rd Bass, a white rap duo with a black DJ named Richie Rich whose tracks would set you correct with the effect of “The Gas Face.” They weren’t pro-black as a gimmick, and they weren’t the amazing reverse melanin rappers either – they were just New Yorkers who grew up with hip-hop, in hip-hop, who WERE hip-hop. Unfortunately keeping a group together is difficult even when you achieve the heights of success, or sometimes BECAUSE you achieve it, and 3rd Bass went their seperate ways after “Derelicts of Dialect” in 1991. Signed to Def Jam and still ready to kick the flim flam, Serch dropped his seminal solo album “Return of the Product” in 1992. Despite being an underground hip-hop classic with tracks like “Here it Comes” and “Back to the Grill Again,” Serch was left searching for the success he achieved in 3rd Bass and doomed not to find it.

“Life is lookin like more of a 9 to 5 job
My man calls collect so much I mailed him my phone card
And when I sees my peeps, I still stop to speak
Life is so bleek I don’t live year to year but week to week
And I’m TIRED of those suburban kids
who think they know what time it is, cause they know what Onyx is
If you saw a bald head, with his gun up in the air
Bet you dollars to donuts you’d be the fuck up outta there!”

Still signed to Def Jam in 1994, Serch tried in vain to record his sophomore solo album for a label that had little interest in releasing it and even less in actually promoting it if they actually did. Serch had to drop his search for solo success and go on a whole new quest, leaving nearly a whole new album that was fresh on the shelf to gather dust due to a lack of options. Michael Berrin dropped the recording artist side and focused on the business opportunities at hand, which started with helping a fledgling recording artist named Nas get a record deal back in ’91 and grew into the promotional powerhouse named The Testament” after years of negotiating and finally put out an album that might have owned 1997 if they’d had the balls to release it back then. While the corporate communications might not have been as difficult for Berrin due to his ties within the label (he rose as high as National Promotion Director before leaving Def Jam completely) it’s nonetheless been a 12 year wait to finally blow the dust off his unreleased tracks.

“Sit down, stick around, I’m about to rip it out the frame kid
Same name plus plus the same game kid
Ain’t nuttin changed ‘cept the day to day, the year, the season
For whatever reason, a misfit in my lyrical profession
The ghetto’s a profession so why can’t we get a pension?
So my expression anger plus tension to begin
I’m dangerous like dangerous like a mob in a building
Right now I’m chillin
Livin in the Land-o-Lakes, cause my flow is butter from the start
Called your girl Napoleon, the way she ripped the +Boneparte+
I’m skilled in the trade so the parade ain’t tryin to evade
the kid who ain’t been slayed since the third grade
Beats and flow I handle so they’re parallel
Never have I fell and if I have an L there goes the power cell
HOW IN DA HELL, can I change the world I’m one man?
But if hell is how, maybe now I can get a suntan”

The excerpts you have been reading are from that album, which Serch has appropriately “M.any Y.oung L.ives A.go: The 1994 Sessions.” Now the only song name from this project I can confirm to you 100% is “Handle It,” the above quoted song which is ostensibly this album’s first single. I say “ostensibly” due to the fact this album isn’t actually being released at retail, and you probably won’t find the single there either. Serch has teamed with The Orchard, a group that bills itself as “The World’s Leading Digital Distributor of Music.” Does it matter if they are? Of course not, only the product matters, and the product here is the long awaited follow up to “Return of the Product” that does indeed sound like it’s ripped straight out of the year 1994. The lack of confirmed song names is due to a digital advance copy labelled “Track 1” through “Track 10,” but that doesn’t stop this writer from speculating and making some educated guesses all the same. The other excerpts are from a song I’ll dub “Practical Poetry,” while the opener is likely called “What” or “The What,” which for wrestling fans will come as huge irony since a white rapper from New York invented the concept long before Stone Cold Steve Austin ever stepped inside a WWE ring. Serch explains the concept in typically humorous fashion:

“It always makes me laugh when a brother says somethin
and I say WHAT, and he says it again: WHAT?
Ain’t like I ain’t heard
{*scratched: “what tigga what”*} No WHAT is a word
So go ask the Don who’s the Dada
G’s in the banks plus Ranks like Shabba
Guns in the air, find the stairs for the step
In case you forget – WHAT?
And don’t act the fool
Cause the mob’ll wet you up like you came out the pool”

Serch may have been cursed with being lyrically blessed, because throughout this digital download you hear the best unleashed on a half-dozen tracks plus one that were previously unreleased, plus 3 more from a failed attempt at a 3rd Bass reunion in 2000. As an anti-white rapper backlash spread across hip-hop in the wake of Vanilla Ice’s treachery, a movement 3rd Bass may have unintentionally spearheaded with their hit “Pop Goes the Weasel,” Serch was caught in a transitional era after the demise of his own group and before the rise in popularity of Eminem, where narrow-minded marketing executives at record labels would say “Sure he can rap but who’s gonna buy it?” Well here’s a tip – YOU should. Yes the album is for the most part over 13 years old, but that’s precisely what’s so beautiful about it. Listening to it you’ll hear “Illmatic,” “The Sun Rises in the East” and “Ready to Die” all rolled up into one. Fresh beats meet tracks with no names yet revealed, but the revelation of “M.any Y.oung L.ives A.go” is a somber chance for reflection on a bygone era of greatness where one of the dopest rappers of his generation got left stranded on 3rd Bass and never got to cross home plate. Scheduled for an online release date of March 21st, keep your eye out for “M.any Y.oung L.ives A.go” and in the meantime check out Serch’s comically absurd yet deadly as cancer “The White Rapper Show” on VH-1. With all due respect to his contestants, none of them have one-tenth the talent that he displays on one tenth of this album.