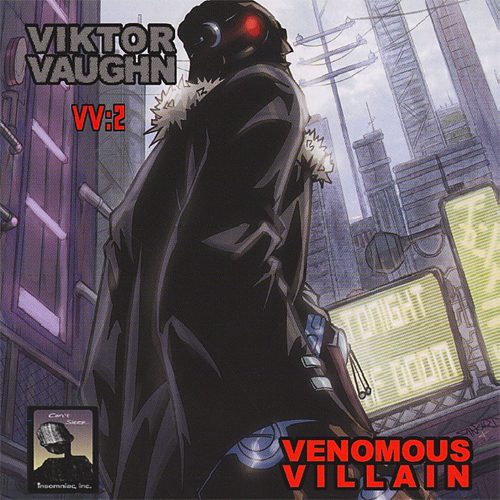 If there was one acceptable underground king right now, it would be MF Doom. If you don’t concur at least agree he’s the closestâ€¦maybe Royce Da 5’9″ but he’s really in-between leagues. Doom has been surmounting street credit from way back in his boyhood, beat breaking days on his “Special Herbs” mixes. But he is just recently emerging as a fan favorite from his two latest releases: “Madvillainy,” a coo-coo combo album with the cartoon producing Madlib; and his alias album as Viktor Vaughn, “Vaudeville Villain.” The former inched its way into the indie mainstream to sit proudly price-gouged around college campuses and even managed to win some serious stars in a feature review by Rolling Stone (surely out of its pure strangeness). But it wasn’t the Metal Faced Doom who laid claim to the crown. His younger alter ego, Viktor Vaughn, championed fans, rappers, and critics alike with his laconic, nonchalant flow and whimsical witticisms in “Vaudeville Villain.”

Viktor Vaughn is to MF DOOM what Bobby Digital is to the RZA; their teenage manifested Tyler Durden: the mischief-maker created to counter acts the serious, cynical Edward Norton-ness of being a independent artists. Stay with me. MF Doom is a political statement, almost a pun to the industry. By wearing a mask, and bantering to a cartoon image, he satirizes the record industry gimmicks. He is a parody of the artists who are pressured into acting a certain role, looking the image, and who basically wear a mask. In Doom’s own words, “that’s you if you want a dude who wear masks all day.”

But being serious and proverbial all the time gets old, even to the artists. Men like the RZA and MF Doom are jaded of the mundane mainstream but get even more tired of having to be so damn political all the time as independents. These mischievous alter egos free the burden of having to be somebody. That is why Viktor Vaughn isn’t a super hero, here to save the day for commercially coerced consumers, he’s a villain. He’s the bad guy. And everybody loves the bad guy.

Production for VV2 was raffled off via a contest where the unrecognized record spinners of the underground could submit their best beats for a spot on the album. A handful of producers were chosen, apparently by their ability to recreate the uncanny electronic sound that enigmatically marked Vik’s first album. What you get is another estranged ensemble of neo-technoish beats that surprisingly mix together quite cohesively.

The intro, “Viktormizer,” starts off with a few-of-the-usual samples and some scratching before loosely mixing into “Back End.” Right when the Vik-ster breaks in the beat shoots off on a spaced-out, drum crazy rhythm that sounds authentic to Vaughn’s electronic panache. DiViNCi delivers a militant beat on “Fall Back/ Titty Fat” that Vik lyrically embellishes.

But the hard, marching beat flips three times. This sort of intenerate beat shifting is something you should get used to on VV2. No beat seems to sticks around the whole song, no matter how good it is. It is an incessant progression that keeps the album constantly moving forward and gives its spectrum of producers a strange sense of cohesion. “R.A.P. G.A.M.E.” and “Dope Skill” are lighthearted, vintage rap ballads with a Madlib quaintness. “Doper Skiller” features a waning Kool Keith who trades verses off Vaughn, who is sick “like mad cow kickin’ in.” Next, the Vik-ster cruises over the sullen melody of “Ode To Road Rage” like a sleep deprived truck driver. “Bloody Chain” is a real gem

“I had this one bitty, she gave good brain
Used to come see me in the hood on the train
One way cost a buck-fifty
Not a bad loss if your sure to suck her titty
At least, for better or for worse
Her nails were more faker than the letters on her purse
Not quite the Gucci butters
No drawers cooche cutters
And the hooche stuttered
‘Y-Y-you gotta another Deski-kid?’
She listened to that rap shit
V was outta touch with
Lit it, hit it raw with no fuss
Only thing she said was
‘J-J-Just pull-out before you b-bust'”

There is one huge problem circumscribing the Vik-ster’s sophomore release, THERE IS BARLEY ANY VIK ON IT. Out of a measly twelve tracks, four are skits! Making VV2 more of an expansion album than a real release. To make matters worse, his record label, Insomniac, decided to dog pile every rapper on their roaster into the already stubby track list for promotion purposes; leaving Vik barely any elbow room to rhyme. Out of the eight actually songs, five are cluttered up with Insomniac up-starts that barely leave V a verse. Vaughn only gets THREE tracks to himself. THREE!

However, disappointed fans aren’t the only ones frustrated by Insomniac’s slacking attention. Viktor Vaughn incites his dissatisfaction with the album from his very first words, “dub it off your man, don’t spend that 10 bucks/ I did it for the advance, the back end sucks.” The attacks don’t stop there either. Repeatedly he lays complaints like “Can’t stand the beat, there’s no sense bitchin’,” and “coulda flipped it longer â€˜cept the beat was rather rinkydink.”

“Venomous Villain” is more of an Insomniac promo CD than a credible sequel to Doom’s dastardly “Vaudeville Villain” release two years ago. Even so, Doom stylistically slays every opportunity he’s given at the mic, proving he’s almost invincible. VV2 might not cement the crown for MF Doom, but it certainly doesn’t hurt his reputation either. Overall it’s a great snack for Doom’s fervent fans to tide their grumbling stomachs withâ€¦at least until his next, REAL release.