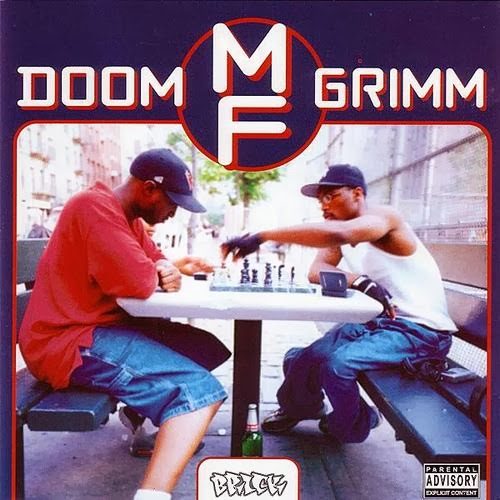 Here comes MF Doom again; that crazy motherfuckin villain who ain’t afraid to call out “sissy pissy-rappers whose double dutch” and his grimy crimey MF Grimm – he who is in fact currently doing a bid for some unfortunate badness from a prior life. This 14-track EP seems extra long at first; if you look closely it’s seven tracks and seven instrumentals – which is actually kinda ill and nice for the fans and DJ’s who want to flip it in the mix.

The lead track “Doomsday Remix” is remixed from Doom’s LP “Operation: Doomsday” with new music by Mister Jason and cuts by Fakts One. This track is pretty nice altough it’s a little more club friendly than what one would typically expect from Doom. Perhaps sensitive to that perception, Doom responded with the next track “No Snakes Alive” which features King Ghidra, Jet Jagua, and Rodan. Although you can certainly respect the track for experimenting with the concepts of tempo as Doom has done in the past to great effect, it doesn’t really work here. The song speeds and slows without warning; whereas in the context of Doom songs like “Tick Tick” from his LP (coincidentally a duet with MF Grimm) the changes were structured so that you could reasonably expect when and where they’d occur. Doom recovers nicely with the somber and heavy “Impostas” which definitely sounds like an unreleased b-side from the “Operation: Doomsday” recording sessions.

MF Grimm is represented with four cuts immediately following, including two versions of “The Original” which bookend his selections on either side. The Fakts One “Remix” comes first and Grimm kicks some hardcore braggadociousness with rhymes like “All big-head rappers I will diss them; the world is too little – Grimm Reaper run the {fuckin} solar system.” This is pretty typical of Grimm’s style – he’s a straight ahead rapper who really doesn’t pull any punches or try to act super-complex with his hard lyrics; as he says in “Break Em Off” he’s “known for showin love and bustin pistols.” Even though this cut is a little lackluster in the energy and beat department it’s quickly made up for by the spirit of “Dedicated” – a cut which ostensibly goes out to their fallen brother-in-arms Subroc and any other members of their crew who passed on. You might be caught off guard when he says “push record and let me cry” but that’s the endearing part of Grimm’s raps – his brutal honesty.

On the whole, this EP has some nice flavors that can be said to be both typical of New York’s underground rap scene and ahead of their contemporaries at the same time. On an album with only seven songs, two weak cuts like “No Snakes Alive” and “Break Em Off” hits harder percentage wise, but anybody who is a fan of Doom or Grimm shouldn’t feel dissapointed by this release – and if you’re not into one of the two you’ll be checking for the other when you’re through. Shout outs to Bobbito Garcia, Day By Day Entertainment, and Brick Records for the hook-up.