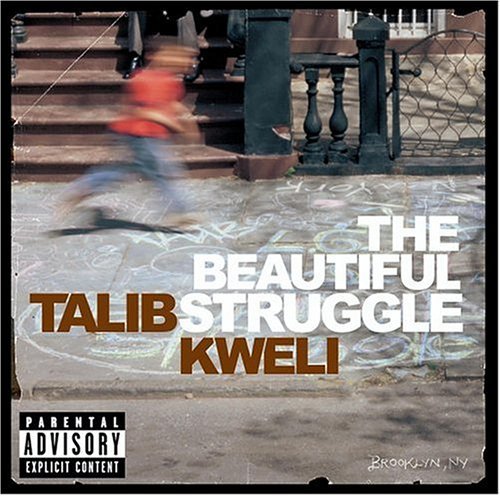 It’s debateable whether or not Talib Kweli is a household name, given that some of you reading this STILL don’t know how to pronounce it properly. Take it from Vinia Mojica, co-star in his hit single “The Blast,” and you’ll know it goes “kwah-lee.” Personally I prefer his own explanation – Kweli is what you find in the middle of “equality.” Whether you know how to say it or not though isn’t important. The only thing the uninformed really need to learn about him is that he’s one of the most consistently fresh rappers in hip-hop. That’s not just consistent in lyrical flow and rhyme writing ability (both of which are among hip-hop’s finest) but consistent in releaasing “best of the year” album contenders every two years; first as one-half of Black Star with Mos Def on their self-titled and self-explanatory album in 1998, then on 2000’s “Train of Thought” and again with 2002’s “Quality.” Kweli seems to be on a non-stop quest to be regarded not just as a great rhymer, but as a rhymer who had something great to say and the balls to do it.

The thirteen track, fifty-three minute long album he calls “The Beautiful Struggle” is no exception to that rule. Things are starting out hot on the aptly named “Going Hard,” but from here it’s only going to get harder. Still for the uninitiated it’s an appropriate place to start, as Charlemagne’s rolling symphony puts everything from pianoes to rock guitars in the mix as Kweli puts the message back into the music. So many MC’s today seem to be afraid to make a point, take a stand, or say something profoundly important for fear of losing their audience or making “undanceable” music. Kweli’s philosophy is exactly the opposite – I’m going to say some shit you can think about, and see if you’ll stick with me. Nothing’s beyond his reach, not even the consequences of a materialistic life on third world countries and the cost of globalization:

“You say you never scared, there’s kids in other countries
makin jerseys, jeans, sneakers they could never wear
Parents never there, they busy buildin homes they can’t afford to buy
Cars they can’t afford to drive, workin jobs that don’t support they life
[…]
People ask me how we wearin diamonds
When there’s kids in Sierra Leone losin they arms and cryin
while they minin, probably an orphan, his momma died of AIDS
He built a coffin, workin often, but he never paid”

People will be happy to hear Hi-Tek back in effect on the swinging “Back Up Offa Me,” where the supremely confident Kweli brags that he’s “surrounded by more babies than Ashanti songs,” and that you can “try to walk in my shoes, I know you won’t fit it.” Surprisingly though it’s a somewhat mediocre beat, especially when compared to the Neptunes produced “Broken Glass” that follows it. It may seem like an oddball match to put one of hip-hop’s fiercest rhymers with the producers of some of rap’s biggest pop hits, but they fit together WAY better than OJ Simpson and that glove. The end result is like a marriage of LL Cool J’s original version of “Rock the Bells” with Run-D.M.C.’s “Peter Piper,” and when Kweli spits on it they prove to be a match made in heaven:

“Dreams shatter like broken glass
Pressin on and your hopes get broken fast
You could plan for the life you supposed to have
But when you try to make plans, God is known to laugh
Throw a song on the phonograph, and Lucy start whylin
The trick start smilin, watch the loot start flyin
The Gucci start pilin up, she live designer plush
Start linin up the coke so she could find a rush
Time’s up, she about to turn 33
Her shit started to sag, she got surgery”

No doubt about it, the life of the dimepiece turned ho in this song only goes from bad to worse. Talib Kweli represents a form of “reality rap” where people don’t shoot or get shot to prove their authenticity. His reality is that of telling about real people, real problems, and real struggles. And when Kweli’s vocals are paired with the right beats, the struggle is indeed beautiful. It can be as smooth as the Supa Dave West produced “We Know” featuring Faith Evans, as fly as interpolating The Police on the Charlemagne piano-tinged “Around My Way” featuring John Legend, or as somber and thoughtful as “Black Girl Pain” laced by Dirty Swift and Bruce Waynne. Kweli hasn’t forgotten that you need a single to bring in the audience though, so he hooks up with Mary J. Blige on Kanye West produced “I Try” in an all-out effort to bring the reluctant who are wary of intelligent rap over to his side:

“K. West! Kweli!
Got searched on the plane, Arabic first name
Disturbed by the fame just like Kurt Cobain
Breath of life, kiss of death, my lips pursed the same
You flirt ’til she came, nothin hurt like the pain
and torture – daughters of the dust lookin for a vein
Something to take in vain like the Lord’s name
Put your hands together, got ’em all sayin’
(I try… I try… I try… you know I try)”

As reluctant as I am to do so though, there are some shortcomings to this album which must be address. Considering this album was already delayed several times (resulting in a widely available “Beautiful Mix CD” to tide over fans) one would expect nothing but that fire musically on every track. There are a few songs though with beats far enough off the mark of dopeness to be inexcusable. “A Game” by Antwan ‘Amadeus’ Thompson tries too hard to make squeaky electronic sounds into a form of music, but they grate on the ear and the backing beat is annoyingly repetitive. “Work it Out” is another Hi-Tek production that’s competent but far from the standards he set on “Train of Thought,” but Talib’s engaging tale of power-tripping people saves the song. “We Got the Beat” goes for a “Planet Rock” type sound but never quite achieves it. The album closes strong on the Just Blaze produced “Never Been in Love” and Hi-Tek’s title track, the latter’s best contribution to the whole CD. Even excising out the mediocre tracks, one’s still left feeling slightly non-plussed.

Considering the high standards for beats set by Kweli’s previous works, it may be hard for any future album to not seem lesser by comparison. There’s no reason for excuses though, and Kweli himself is not the type of MC to make any. While he’s still the 21st century’s answer to KRS-One, a rapper who is simultaneously intelligent and engaging, he needs to work with producers who are capable of sharing that vision with the masses in an equally engaging way. At times “The Beautiful Struggle” achieves this perfection combination, and at other times you’re left loving the lyrics but lacking in headnodding dopeness. Still for the standard of writing and rhyme reciting he has set and continues to uphold, “The Beautiful Struggle” is well worth the time to listen to and will get repeat play on the audio system of your choice. Don’t be afraid of the struggle, embrace it.