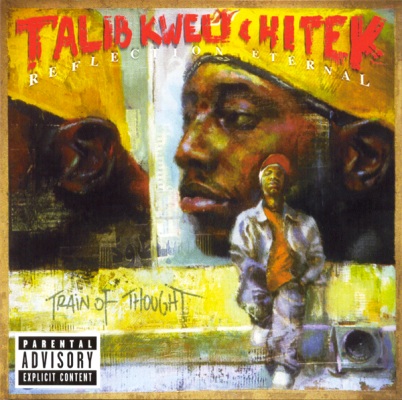 Critically acclaimed? It would be fair to say so. Talib put the ‘Kweli’ in quality through a whole series of releases – twelve inches as Reflection Eternal, membership as one half of the rap duo BlackStar, and solo magnum opuses such as “Manifesto” on Lyricis Lounge 1 and “On Mission” from Soundbombing 2. He’s got “way more than necessary skills for the application,” as he says himself on “This Means You.”

Obviously though Kweli still feels he has something to prove, as does his producer of record Hi Tek. In fact, this album may be a true rarity in hip-hop these days – an album that was entirely produced or co-produced by ONE man alone – Hi Tek worked on EVERY single song and interlude on this album. Hi Tek is for this release what the RZA was to Wu-Tang when “Enter the 36 Chambers” first debuted more than half a decade ago; and like his predecessor he sets out to create a unique sonic landscape.

“Train of Thought” is the fruit born from their labors, and it’s certainly not a bitter apple. In fact, there is plenty of sweet material to munch on throughout. The tympanically booming sound of the lead single “Move Something” showcases Kweli’s skills. Talib ducks and jabs with his lyrics and tries to get listeners to open their minds at the same time. He is witty throughout with lines like “you cats ain’t real, y’all just a reenactment/better yet, dramatization/soon as the director say action you start fakin.” At just over three minutes the only drawback is the song is too short. C’mon Kweli, spit another verse!

Hi Tek mixes up his production to keep the album from getting stale or repetitive. The aforementioned “This Means You” is puncutated with string interludes, while “Down For the Count” uses increasing staccato bursts of volume interspersed with guitar breaks. The guest verses of Rah Digga and Xzibit also contibute nicely on this joint; especially the latter’s “I’m i-rate, usin your body for live bait” take no prisoners verse. (His next solo album is gonna be hotter than Hades.)

Speaking of combinations, no one could have actually conceived of putting Kool G. Rap and Talib Kweli together unless they were labelmates. Since they are we have “Ghetto Afterlife,” a cut that works surprisingly well despite their different lyrical styles. G. Rap punctuates the chorus between verses and gets the whole third to shine, but it’s the dirty piano keys and samples of Premier (yes, DJ Premier’s VOICE itself sampled) that glue this grimy cut together. In fact Hi Tek laces this up so well we can only hope that G. Rap’s Rawkus debut will feature some more of his work.

Talib also lives up to the “Reflection” in Reflection Eternal with some smoothed out melodies and a looking-over-life rap style he made famous with the BlackStar songs “Respiration” and “Thieves in the Night.” Talib reflects on his past life achievments on “Memories Live” and life in Brooklyn on “Good Mourning.” These tracks will not shake your ass or overwhelm you with punchlines; instead, they mellow you into a groove akin to sharing a “Balcony Beach” with Lyrics Born. If that’s too esoteric, just imagine the lackadaisical voice of Q-Tip rapping over the beats of “Bonita Applebum” or “I Left My Wallet in El Segundo.”

You can find a track or two here and there that are underwhelming. “Some Kind of Wonderful” attacks a lot lyrically but also exhibits Kweli’s occasional tendency to get Dennis Miller-ian with references. “Niggaz still sleepin like I’m Jay-Z in the video for ‘Hawaiian Sophie.'” No one faults Talib for being clever, it’s just that at times he seems too anxious to “smack them in the face with a metaphor.” Relax son, we believe you. It’s on songs like “The Blast” with Vinia Mojica where he kicks back and has fun with it that he shines the brightest. “Soul Rebels” exemplies this attitude when he says “we don’t live for hip-hop, hip-hop it lives for us” and includes the (surprisingly uncredited) cameo appearance of De La Soul.

Though there are those who have accused Talib Kweli of not maintaining a flow, he only deviates from the beat when he has to insert a punchline. There are though who have accused Kweli of not having a pleasing voice, but his timber is certainly not as unusual as Slick Rick or Khujo from Goodie Mob. In fact, it’s nowhere near as high as Reverand Run or as low as Big Daddy Kane – it’s smack dab in the middle and he changes up his pitch nicely in the delivery of his words. The only thing that may be daunting about this album is the length – 20 tracks is quite a lot to chop up. The reward of the effort is that 80% of this album is the kind of dopeness you would expect from the man who shocked underground hip-hop with “2000 Seasons” and “Fortified Live.” This album’s one major weakness may be that they weren’t included as bonus tracks; but the stunning “For Women” is. If you were already a Talib fan cop this, and if you weren’t but you love hip-hop you owe it to yourself to Reflect Eternally.