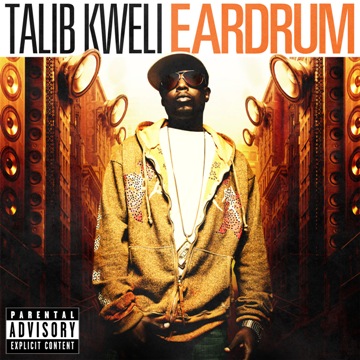 “I tried to fit it in the same rhyme, but realized I can’t be everything to everyone at the same time.”

The last lines of “Ear Drum’s” introduction track, “Everything Man,” act not only as statement, but as a warning to listeners. Talib Kweli is done trying to appeal to make music for us. Whether it be Black Star fans looking at the commercial production of “Beautiful Struggle” with disdain, or mainstream rap fans criticizing him for being to wordy or preachy, Kweli is done trying to please us. He’s even done trying to please hip hop’s corporate presence, ditching his ex-label Geffen for his own Blacksmith imprint. He even makes fun of the situation over the soulful sounds of Pete Rock on “Stay Around,” a mock conversation with a crowd of fans:

“Kweli, you should rap about this, you should rap about that”
Any more suggestions? Yeah, you in the back
“You should rap more on beat, you should rap more street
and never, ever get your mack on, please!”
How about you?
“I like it when you’re melodic
Cause you capture hypnotic portraits that seem to make the average exotic”
“Kweli, you nice, I know you getting some love
but you can’t spit like a thug, you wanna blow, make a hit for the club”
Word
“I don’t like your choice of beats, it sounds like it’s forced
What was up with “Back Up Offa Me?
I ain’t like that”
“You should get with Hi-Tek”
“Yeah, he got nice tracks, them other dudes is tight wack”

Freed of any expectations but his own, Kweli has released his best, most consistent album to date. Long-time Kweli fans will immediately notice that Kweli has mellowed out noticeably. This comes with mixed results. First and foremost, the smooth, laid back production and rhymes of “Ear Drum” simply make for an incredibly pleasing listen. Kweli finally seems comfortable in his own skin here, and it shows. His delivery has improved tremendously, as he transitions from the lyrical bitch-slap of “Say Something” to the upbeat, funky “Country Cousins” without a hitch. The name “Ear Drum” itself is telling; this album is the first time that Kweli seems to be aiming for your ears as much as your mind.

However, the laid back approach of the album leaves Kweli coming off somewhat less essential, less important than he has in the past. There’s not a song here with the power of “Get By” or “Definition.” The producers of those songs, Kanye West and Hi-Tek respectively, make contributions here that fall far short of those highlights in terms of pure energy. Kweli has employed a number of hip hop heavyweights: Pete Rock, Will.I.Am., Madlib, and Just Blaze additionally all pitch in for the smooth sound of “Ear Drum.” For better and worse the production is much more likely to sooth your soul than raise your fist.

In essence, “Ear Drum” gives up the ultra-highs of “Get By” and gets rid of the lows of “Waitin’ for the DJ” for a record that consistently hovers between “good” and “great.” Even the lowest points of “Ear Drum” are intriguing. While “The Perfect Beat” is anything but, when Talib and KRS-One start competing with each other’s verses, hip hop heads everywhere smile. And even the syrupy ode to his children, “Oh My Stars,” keeps a foot in reality, and is very well-written and produced.

And the strongest moments are some of the best of his career. “Country Cousins,” an unexpected collaboration with UGK, celebrates the connection between New York and the South, rather than emphasizing the differences. And while this is mostly a laid back record, the few louder moments keep it from becoming monotonous. Hi-Tek chips in for their 2007 update of “The Manifesto” in “More or Less,” while lead single, “Listen,” isn’t a request, it’s a demand. Strongest of the trio, however, is “Say Something,” where Kweli and Jean Grae blast anybody who would “talk shit now:”

(Jean Grae)
“Open your mouth, “Say Something”
I fuckin’ dare you!
Choking you out ’til you can’t suck no air through
[…]
Jean and Kwe the last two; action heroes
Actually have the capacity, to be the ones in a class of zeroes
Hip Hop’s not dead, it was on vacation
We back, we bask in the confrontation”

(Kweli)
“We not falling for your trick ’cause your image is like a gimmick
Forget it, every rhyme is bitten, you like a mimic
I’m talking to the Lord and asking him for forgiveness
Just for kicking niggas out the club like Michael Richards
[…]
The writing’s therapeutic, it’s due to the pain and suffering
While these dudes get it confused, and abuse the creative substance
Giving you a contact high, my name buzzing
And I came in the game with nothing
Stop frontin, nigga, talk shit now!”

Meanwhile, Kweli remains as insightful as ever. Self-righteous underground fans will likely cry out in protest over Justin Timberlake’s appearance in “The Nature,” but the collaboration works better than it should, as Timberlake adjusts his sound, and Kweli’s performance is one of the strongest on the album. In other places, Talib shares his “blood, sweat, tears” with listeners on “NY Weather Report.” Kweli is at his best when reflecting on life itself, whether on the pro-spiritual “Give ‘Em Hell” or on the standout reflection, “Soon the New Day,” which is blessed by excellent contributions from Norah Jones and Madlib:

(“Give ‘Em Hell”) “They got us thinking that Muslims like to make bombs
But real Muslims believe in paradise and resisting Satan
So it all sound the same to me
That’s why when they say one’s right and the other’s wrongv it all sounds like game to me
[…]v Religion create division; make the Muslim hate the Christian
Make the Christian hate the Jew
Make up rules of faith that you conditioned too
And gotta follow, and God forbid you go to hell
But if you ever been to any ghetto then you know it well”

(“Soon the New Day”) “You have a ball today? It’s all a masquerade
Shorty paint her face like a clown
But can’t take away the frown found under the make-up
I asked her, “what’s your passion?”
The answer was “the paper”
She sleeping, they don’t want her to wake up
Maybe then she’d realize her own beauty…”

“Ear Drum” is a breath of fresh air, stepping back from the boundaries Kweli has found himself trapped in over the course of his career. He’s abandoned the labels of “conscious” or “underground,” and focused instead on making the best music of his career. Ironically, by stepping away from the expectations of his audience, Talib Kweli has made the career-defining work that his fans have been expecting for nearly a decade.