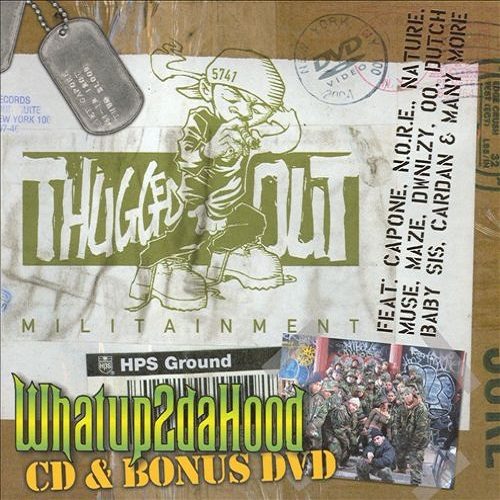 Thugged Out Militainment :: What Up 2 Da Hood

“WHAT! WHAT!”
“Hang! Hang!”
“Hennessy straight, with tomato juice”

These are just a few of the nonsensical things that can come out of Nore’s mouth at any given moment. He’s really a lot like Ghostface Killah in many ways. Sometimes we don’t understand what he’s saying, but we love hearing him say it. And no matter how crazy it may sound to us, when Nore says something he says it with such conviction that you swear you just missed some life changing advice. Because of this, Nore is the type of MC you either love or hate. Ironically enough, Nore’s career started with a critically acclaimed album from CNN (Capone ‘N’ Noreaga in case you didn’t know) that set a high standard for Nore from both underground and street heads. Underground heads might still point to “The War Report” and label every release since then a disappointment, but far from letting this keep him down, Nore has moved on completely. His latest release introduces us to his new label, Thugged Out Militainment, a name that lets heads know just what to expect.

Far from official, this release is a mixtape that comes with a free DVD of the Thugged Out Crew in the lab and includes a few “underground” videos of songs from the CD. If that wasn’t enough to persuade you to shell out your hard-earned dough, this mixtape doesn’t feature an annoying DJ yelling over every track, but instead gives you the music straight, with tomato juice. The sound quality is also more professional than your average mixtape, so you don’t have to worry about blowing out your speakers when the levels suddenly spike.

The mixtape’s first full track, “What We Do,” is the definition of a street banger. So you can understand how dope this track is, this reviewer heard it on a DJ Green Lantern mixshow/mixtape on Hot 97 a few months ago and since then has made it his task to find a copy of it. It suffices to say: Task Accomplished (FINALLY!) Lyrically the track features 8 MCs, that’s right, 8 MCs spitting what is basically a Thugged Out version of “The Symphony”:

“Ma’fucker, this is target practice, y’all just actors
impersonating a Mobster, you should win an Oscar
Yeah, Nigga you’se a great imposter
but that road don’t cut it, with a hole in your stomach
I get right to the source, gun fight with the boss
I’ll have you shaking like Ali lighting the torch
They say life’s a bitch, I give you and life a divorce
but dawg it’s cheaper to keep her than meet the street sweeper
[…]
If you neva eva shot nobody, and you neva eva stabbed nobody
stop frontin’ and actin’ like you do what we do
If you neva eva cooked no product…”

I don’t usually include the chorus, but it just shows that when Nore says he’s thugged out, he’s not lying. The beat is equally dope, a pulsating and hard hitting track with enough soulful energy to almost outshine all 8 MCs on the track.

This pattern of street bangers continues on almost every track of this mixtape. CNN’s “Yes Sir” is equally satisfying, Big Tigger of RapCity’s “The Bassment” comes through for a solid performance on “TNN,” and even newcomers like Philly’s John Doe give us the heat on this CD. Southern favorite David Banner shows up with his “Crank It Up (remix)” reuniting with old Penalty Records labelmate Nore, bringing back memories of Crooked Lettaz’ debut album “Grey Skies.” Dipset’s own Capo Jim Jones makes an appearance on “Militainment Soldiers” while Juelz Santana drops his own flavor on “Stay Right Here.” Nore and Capone also deliver very solid solo joints with “El Pollo Loco” and “Falling Soldier,” respectively. Out of the two, Capone’s solo joint is the best as it’s divided into two parts, the first is an homage to the late greats Biggie and Big Pun, where we find Capone paying tribute through a jacking of hooks approach. The second part gives ‘Pac his props also, making sure none of the fallen soldiers from any coast or country are forgotten. Disappointing tracks do exist, but are hard to find. The potential of “36 Thugs” fails due to sub-par 3-6 Mafia production and a weak and unimaginative hook, though the verses from both camps are strong. Some of the freestyles included are also not very impressive, but detract little from the overall product.

No production credits are given, but it too is on point through out the almost 70 minutes of the mixtape. Timbaland provides a party beat that’s equally street for John Doe and Nore on “U Don’t Believe Me.” The rest of the songs are hard enough to shake any trunk, but up-beat enough to keep your blood rushing. Basically, you can play this in the car during the weekend while you’re out doing your thing.

Overall, this CD is a very good introduction to Thugged Out Militainment. If the quality of future releases matches the energy found on this mixtape, then Thugged Out will be a crew to be recognized along with Dipset, D-Block, and G-Unit. For those who hate Nore or want another “War Report” this CD will do nothing to change your mind about him. But for those looking for some hardcore street tracks to bump in your ride, look no further.