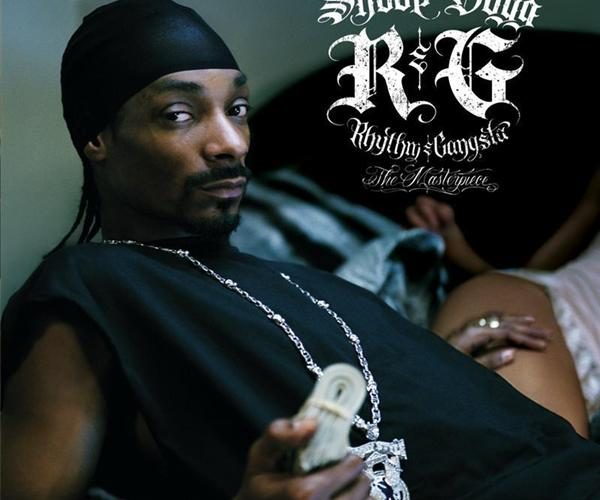 It might not have been evident from his early career that Snoop Dogg would become one of the most identifiable hip-hop artists in all of pop culture by 2004. Yet here we are, over a decade after he debuted on “Deep Cover” with Dr. Dre with an anthem about killing cops, and an entire nation of people have embraced his doggy stizzle fo’ shizzle. Advertisers, awards shows, and artists alike all compete for the services of Calvin Broadus. I’d hate to think what his asking price is for an appearance these days. Snoop is in an enviable position – he could retire from rap music altogether and just live off the royalties and the work he finds on TV shows and in Hollywood. How did a rapper who was once on trial for murder, whose career was nearly written off for dead when Dr. Dre left Death Row, achieve so much fame and success? The only real answer is “being himself.” Snoop’s sly shit-eating grin says to his fans, “Hey I’m having fun – why don’t you join on in?” The laid back flow and vocal tone have always made him accessible, so that even when he addresses the roughest of gangster subjects, he’s still as smooth as silk and as cool as the flipside of your pillow. With that much charm and that much style, it’s no wonder a whole nation of people imitate his style and even AOL tries to cash in on his celebrity status.

The only real motivation for Snoop Dogg to continue making music these days is his own personal satisfaction. Who needs more plaques, awards, trophies or money when you’re already living the life that Big Snoop lives? Like his East coast compatriot LL Cool J, legendary status is already assured, and the only one to prove anything to with a new record is yourself. Clearly that’s motive enough for him to release his own 10th album, “Rhythm & Gangsta.” That’s ten counting the Eastsidaz records and 213 album, but not the controversial and quasi-legit Death Row album “Dead Man Walkin.” By whatever standard you total his output though, he’s done a lot of work, and he’s not done yet. In fact the stripped down sound of the Neptunes produced “Drop it Like It’s Hot” has produced one of Snoop’s biggest hits to date. Ironically it may be in some ways more gangsterish than his “Deep Cover” debut in some aspects, but he’s so chill about his delivery it doesn’t sound the least bit menacing:

“I’m a bad boy, wit a lotta hoes
Drive my own cars, and wear my own clothes
I hang out tough, I’m a real boss
Big Snoop Dogg, yeah he’s so sharp
On the TV screen and in the magazines
If you play me close, you on a red beam
Oh you got a gun so you wanna pop back?
AK-47 now nigga stop that!
Cement shoes, now I’m on the move
You’re family’s cryin, now you on the news
They can’t find you, and now they miss you
Must I remind you, I’m only here to twist you
Pistol whip you, dip you, then flip you
Then dance to this motherfuckin music we crip to
Subscribe nigga, get yo’ issue
Baby come close, let me see how you get loose!”

That’s quintessential Snoop for you – hard when you’re not looking, but still velvet enough to appeal to the ladies and drive off in a fly Mercedes. Describing his music as “R&G” is therefore incredibly apt; curiously, Snoop decided to even go a step beyond exemplifying the term himself and bring in some outside help to make it that much smoother. You can’t help but chill and groove to “Ups & Downs,” produced by Baby Dubb and featuring the Bee Gees. Yes, THOSE Bee Gees – although given they “retired” in 2003 when Maurice Gibb died Snoop may just be giving them credit for the “Love You Inside and Out” sample, regardless of what the word “featuring” on the jacket implies. You’ll also hear Charlie Wilson on the Neptunes produced “Perfect,” which sounds like “Beautiful Part Two.” Not enough? Then look for him sharing the spotlight with Snoop and Justin Timberlake on “Signs,” although the D-oh-double-G still steals the show:

“It’s legit, you know it’s a hit
When the Neptunes and the Doggy Dogg fin’ to spit
You know he’s in – tune with the season
Come here baby, tell me why you leavin?
Tell me if it’s weed that you need
If you wanna breathe, I got the best weed minus seeds
Ain’t nobody trippin, V.I.P. they can’t get in
If somethin go wrong then you know we get to crippin”

Justin Timberlake does crip-hop? Sounds wrong, but it comes out just right. Snoop doesn’t let up on the rhythmically R&B presentation of his “R&G” album. Even on a song obstensibly about pimping a bitch like “I’m Threw Witchu” featuring Soopafly, Baby Dubb’s beat and the smooth crooning of the vocals in the background make this song come off like an airy spring breeze – you have to pay close attention to the fact they’re singing “you shoulda known you was fuckin with a mack.” The album goes out even smoother than it came in, dueting with Nelly on the L.T. Hutton produced “Girl Like U” and Bootsy Collins on the Hi-Tek “No Thang on Me,” essentially a remake of the Curtis Mayfield classic from “Superfly.” It’s only appropriate to end that way given “Rhythm & Gangsta” on the whole has a very Mayfield-esque quality. Don’t worry though Snoop fans, there are still some hardcore thumping tracks to keep things in balance. From “Bang Out” to “Can I Get a Flicc” to the pounding Lil Jon produced “Step Yo Game Up” featuring Trina, the album does maintain enough of a hard edge to keep Snoop from going TOO soft. Snoop is clearly out to prove a point or two with “R&G” though – one being you can say the hardest shit and still crossover like a motherfucker with the right beats and delivery, and the other being that after over a decade in rap, he’s still got it. Congratulations Snoop, you’ve proved both points successfully.