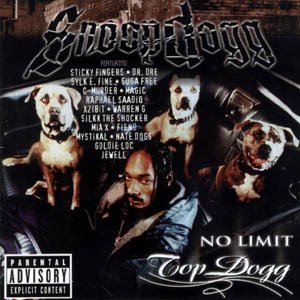 Forget everything you just knew about No Limit. Forget Pen and Pixel artwork. Forget Beats By The Pound on production. Forget the forgettable no-name MC’s whose cameo appearances sell their upcoming No Limit solo debuts. Prepare to be surprised in a way that amazingly appeals to all bases: gangsta enough for the Dirty South, smooth enough for the Long Beach peeps, and full of that type Chronicshit we all fondly remember.

To give you some idea why this is like nothing from No Limit you’ve ever heard; peep the production credits in the linter notes: Dr. Dre does three tracks, DJ Quik does three, and Ant Banks, Raphael Saadiq, and Bud’da each show up for a song. Considering that I can’t think of a single No Limit album that I own that wasn’t produced SOLELY in-house, this is amazine feet in and of itself. Why Master P chose to let Snoop branch out is unclear, but the timing couldn’t have been better: Snoop is in classic form. Over these smoothed out beats he sounds like that “Nuthin But a G Thang” rapper that he always has been but that producers like DJ Pooh, Daz Dillinger, and KLC have been unable to tap into on Snoop’s last two releases.

This jam is dedicated to all non-optimistics/ That thought I wasn’t comin, out with some exquisite, rhymes/ But that’s OK, cause now I’m back/ To kill all the rumors, and straighten the facts â€” Snoop Dogg, “Ghetto Symphony”

It’s hard to even begin to explain how refreshing it is to have the old Snoop back. That rough and tumble, ready to die but smooth enough to scoop your hoe rapper that split our heads open with a hatchet on “Deep Cover”. Egotistical and still rolling with the Dogg Pound, but also broad enough to make room for his new No Limit Family. No Limit has nothing to lose by giving Snoop this room to breathe, because he sounds twice as good on any of the No Limit group songs on this album as he did on Da Game. This time he really IS top dollar with the gold flea collar. You’ll laugh as he clowns on “My Heat Goes Boom”, ride with him on “Just Dippin'” and get krunk as he hooks up with rappers like Xzibit on “Bitch Please” and Sticky Fingaz on “Buck ‘Em”. Of course, this album isn’t a perfect ten. How many are? This album though is strong enough to make fans of Snoop that never were to begin with; which nobody ever thought would happen on No Limit. Wrong! Leaving Death Row in fact was probably the only way he was ever going to hook up with Dr. Dre to do shit like they do on this album again. So how can you hate now? You have to roll with the Tank this time. The Dogg’s back, better than ever.