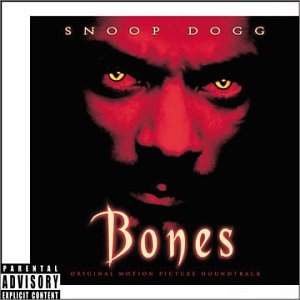 This is the legend of Jimmy Bones: a hustler who was taken down in the game, but whose spirit survived on even beyond the grave. In fact, this is kind of story that “Tales From the Hood” wish they had told, but never had the ambition nor the star power to do. And what? I’m not even talking about the film ya bia bia, I’m talking about the SOUNDTRACK. That’s rizzight, it’s Snoop D-oh-double-Geeee putting down the sounds of triumph and misery with a few of his homies. Big Snoop puts his weight down on eight (nearly half) of the cuts in collaboration with everybody from his Dogg Pound homies to OutKast. How’d he find the time to record so much music and film parts in SEVERAL films including “Bones” anyway?

Ours not to question why, D-oh-double-Geeee is here to multiply. To that degree there are some game orienfested tight tracks that show the way only the West can do it. The thundering Mel Man produced “Dogg Named Snoop”, the Fredwreck funk of Kurupt and Roscoe’s “It’s Jimmy” and the blazing Battlecat track “Gangsta Wit It” with Snoop, Nate Dogg and Butch Cassidy all wreck shop as could be expected. There are some surprises from outside of Snoop’s inner circle too – a fat Cypress Hill cut called “Memories”, the semi-obscure D-12 track “These Drugs” (a bonus on European editions of “Devils Night”) and the Earthtone III remix of “So Fresh, So Clean” are among the clear winners. Did you ever hear someone say that soundtracks are just an excuse for artists to throw away the unused material that didn’t make the cut from their albums? None of these songs has that sound. It’s all boombastic sticky icky; none of that oregano bullshit.

The worst thing you can say about any of these songs is that a few of them are just “so-so.” The “Ballad of Jimmy Bones” by Latoiya Williams is not bad, but sandwiched between two rap songs it seems like filler. Kedrick & CPO fare a little better on “This is My Life” thanks to a Battlecat beat, but more rapping and less singing would have made the track more gangsta. The “Endo” interlude produced by Fredwreck sounds okay, but is really unnecessary – it too comes across as filler between the songs by Cypress Hill and OutKast.

Pundits will be working overtime pondering whether the soundtrack will be a bigger success than the film. Critics love to knock rappers who crossover into acting, and to be honest some of them (Master P, Nas, the whole “Big Ballers” posse) have not exactly glorified the move with their hamhanded deliveries and bad acting. It’s a shame some of the rappers on this soundtrack are only on the soundtrack though; after all who WOULDN’T want to see “The Villain in Black” MC Ren or the “lyrical arsonist” RBX blaze up the big screen with the same ferocity they show on the lead track “Legend of Jimmy Bones”? The movie remains a mystery, but fans of quality West coast G-funk won’t find this album a horrow – and even underground rappers like FT (Fuck That) from the East get some shine up in this bizzotch. Don’t playa hate, congratulate – the “Bones” soundtrack is at LEST as cinematic as the film and guaranteed to bump in your ride fo’ sho’!