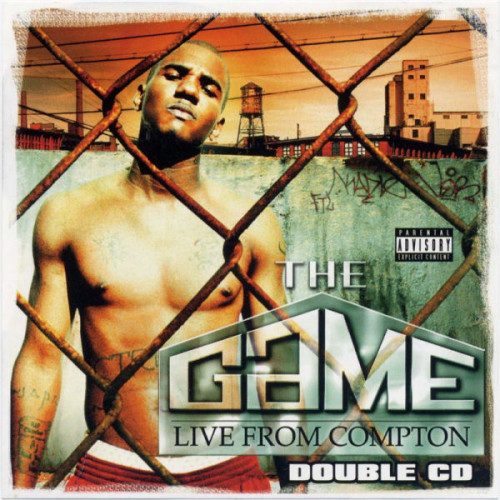 The Game :: Live From Compton

I first caught a glimpse of The Game on an MTV G-Unit special and I swore I was seeing double as I had a hard time telling him apart from Lloyd Banks. Physical appearance aside, I was intrigued when I found out this cat hailed from Compton and found a way to get 50’s attention. With no official releases available I turned to the streets to find out what The Game was all about.

“Live From Compton” is a double mix CD with 29 tracks and was apparently released before The Game got down with G-Unit. The songs range from your typical mixtape freestyle over the latest beat, to exclusive Game remixes, to straight West coast funk from when Game was down with Bay area boss, JT the Bigga Figga.

The intro track is interesting to say the least, as The Game AND E-40 get together to add some west coast flavor to Loon’s “How You Want That.” This may be a Game CD, but it’s E-40 who steals the show and makes you wonder yet again why he gets no play outside of Cali. “Straight Outta Compton” is a remake of sorts that has The Game showing love to his hometown roots, both musically and geographically. The first real highlight on this mixtape is “Compton 2 Fillmoe” simply because JT The Bigga Figga makes an appearance and shows you why he is a self proclaimed “Bay area boss.” The track has The Game and JT going back and forth about their respective cities over a fast-paced beat with a small Indian/Middle Eastern influence. “Cocaine” resurrects the sample from 2pac’s “Troublesome” with relative success, while “Don’t Make Me Clap” jacks Busta Rhyme’s “Make it Clap” beat.

Musically, the trend of either using someone else’s beat or using a familiar sample runs through out the album. “Compton Born, Brooklyn Bound” will sound familiar to any old school fan as The D.O.C.’s “It’s Funky Enough” makes an appearance along with 4-5 other beats. The tracks that feature original production are decent enough for the most part with nothing too terrible, but nothing too outstanding either. “Aftermath” is an interesting track that sounds like it was produced by Dr. Dre, but it’s one of only a select few original tracks on the first disk. The second disk is a big change of pace from the first disk as it features nothing but full-length Game tracks that are representative of the west coast funk associated with JT and the bay area. It’s hard to say which disk is better musically as The Game seems to have a knack for choosing good music, whether he’s jacking it from other MC’s or choosing it for his own songs.

Lyrically, The Game is much like most of the MC’s coming out today as he sticks to “thugged out” bragging with an occasional sick line. He definitely reps Compton to the fullest and is very well aware of the legacy his city has in the hip-hop world. His constant references to Compton and N.W.A are refreshing, especially in a time where every new MC thinks he’s the best to have ever done it. But this isn’t enough to make The Game any different than other gangsta rappers. Though The Game does have some lines that’ll make you press the rewind button, he surrounds these gems with stories of drugs and guns. On tracks like the Memphis Bleek dis track “Memph Bleek Iz,” The Game shows off the extent of his lyricism and his versatility, but those tracks tend to be few and far between.

It’s a shame The Game gets dragged down by his subject matter as the potential to be a superstar definitely shines through on this CD set. While it is admirable that The Game is trying to carry through the Compton legacy to a new generation of rap fans, he seems concerned with the gangsta image that legacy created rather than attempting to possibly add a different and more positive perspective to Compton’s place in hip hop history. If he is able to balance his gangsta image with more substantive matters, then The Game has the potential to put Compton on the map again, even more so than Guerilla Black has done recently.