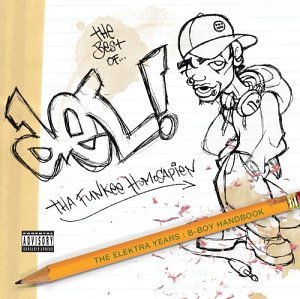 Enigmatic rappers are a dime a dozen in the underground, since many unsigned MC’s believe that being mysterious or hard to fathom is the sure fire ticket to success. The real enigma though is one self-described Funkee Homosapien by the name of Del, an Oakland born and raised rapper who may have very well had his ticket to rap stardom punched just by virtue of being Ice Cube’s cousin. Instead of going the predictable direction and making the kind of hard-edged fiery rhetorhic laced raps of his cuz and using that connection to sell records, Del went about as far in the opposite direction as one could possibly go. He’s widely credited with being the founder of the Hieroglyphics, a rap collective at the heart of a West coast revolution that eschewed gats in raps for backpacks and fat caps. As Del found success on his eclectic debut album “I Wish My Brother George Was Here” with feel good songs like “Mistadobalina” and “Dr. Bombay,” the seeds were sewn for Hiero members like Casual and the group Souls of Mischief to release their own debuts on Jive Records. More and more Hiero-affiliated releases followed, although the collective became frustrated with the weak pushes they received from mainstream record labels. As a result the Hieros were one of the first rap clicks to distribute albums through their own website, eventually turning it into the home for their Hiero Imperium imprint.

Del continued to release albums as an MC throughout the 90’s, although he split from Elektra in 1994. Those albums have established Del as a legend in both lyrical and mental expansion, where the “Future Development” of hip-hop was first and foremost on Del’s brain – “Both Sides of the Brain” to be exact. In fact it seemed as though leaving Elektra has liberated Del in both mind and spirit, as albums like “Deltron 3030” tested AND exceeded the previously believed limitations to what rap music could be. There’s no shortage of excellence on the Elektra releases though, even if they only scratched at the surface of how creative Del could be when he delved into the recesses of his imagination. Del’s topics in those days, as rooted as they were in concrete, were no less appealing to the b-boy for it; if anything the opposite is true. The early recordings of Del epitomize the best qualities of a rap artist – impeccable breath control, an engaging and mellifluous voice, and a wit that was on hit. Those ground-breaking early Del recordings are captured and remastered on “The Elektra Years,” and they sound just as fresh a decade later if not fresher. Peep the way Del focuses a wry eye on his indulgent slacker friends with “Sleepin’ on My Couch”:

“People come to my house and kinda wonder where the squadron’s at
They’re not gone, they’re just down at the laundrymat
Because they wear the same pairs of clothing
I’m taking up crazy patience – just holding my temper
I’m about to start charging rent for
every single brother that kicked it with my mother
eatin biscuits on Saturday mornin like a family
The minute they step it’s like moms is crazy mad at me
Cause they’re in my mother’s room watchin television
I feel like giving ’em the boot and say the hell with ’em
But if I give ’em the boot, I’m not a friend though Even though my room smells like dime bags of indo but
I can’t pretend like I haven’t been peepin it
Even mom knows that my brothers been sleepin
on my couch for weeks, so your speeches fall flat
Niggaz sleepin on my couch and I’m tired of that”

While it would have been easy for Elektra to take the lazy approach and fill half this album with songs from “I Wish My Brother George Was Here” and the other half with songs from his seminal “No Need for Alarm,” they and Rhino Records actually went out of their way to pull songs from the archives that may have slipped past even the most dedicated Del fan. “Missing Link” with the rock group Dinosaur Jr. is here, from the “Judgment Night” soundtrack. The SD-50 remix “Made in America” from the soundtrack of the same name is on this joint. Plenty of joints that only made it to the B-Side of singles are here, from the hip-hop classic “Burnt” that introduced the Hieroglyphic crew to “The Undisputed Champs,” an all-star cypher featuring Pep Love and Q-Tip only on the flipside of the “Wrongplace” twelve inch. With all this crate digging going on, the 60 minutes and 16 tracks of “The Elektra Years” are essential not just for Del historians but for hip-hop fans around the world. Many so-called “the best of” albums really half-ass it when it comes to offering worthwhile extras, but this Del compilation has them beat in spades. If the words “Eye Examination” and “Ahonetwo, Ahonetwo (Remix)” don’t have you excited already, that simply means you weren’t lucky enough to hear such classics the first time around. Face it – copping the vinyls those songs are on at this late date is going to cost you an arm and a leg. At an MSRP of $11.99, “The Elektra Years” is not only a bargain by comparison, it’s a hip-hop classic in it’s own right. Consider this a must own whether you’re a Del fan or just need a primer on why you SHOULD be.