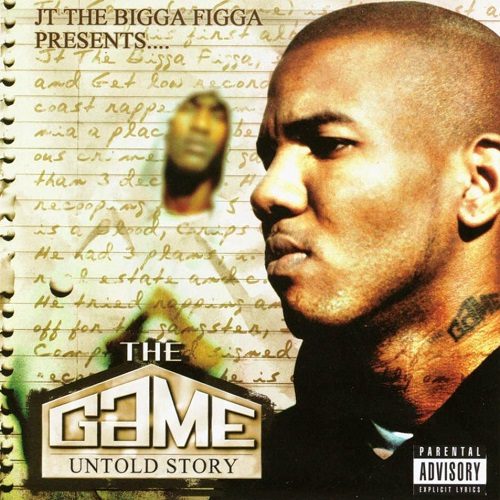 With the official release of The Game’s debut album for Aftermath/Interscope rumored to be delayed until 2005 so as to not hurt sales of Eminem’s forthcoming “Encore” album, it’s little wonder somebody would choose to cash in during the interim. Right now there are few artists hotter than The Game, whose name has been paired on mixtapes with everybody from 2Pac to Eazy-E, seemingly never sounding out of place with any of them. His appearance in the Kanye West produced Boost Mobile song “Where You At? (Whole City Behind Us)” and subsequent commercial has only made things hotter, and his singles “Westside Story” and “How We Do (Fresh ’83)” are undoubtedly two of the most downloaded on the internet – legal or otherwise. You couldn’t buy the kind of buzz that The Game has right now even if you tried, although in fairness some of it is quite ridiculous. As good as he is, people who are saying he’s the next Snoop/Nas/50/whoever need a reality check.

“Untold Story” may be just that antidote. Potential buyers need to know though that this version of The Game and the one they’re hearing today on mixtapes and downloads are scarcely the same person. The modern version has a husky voice, sounds like a cross between Daz and Lloyd Banks, and seems tailor-made to fit into the extended family of artists down with Eminem and G-Unit. The version of The Game on “Untold Story” sounds more like a Bay area rapper. That’s not at all surprising given that this album was executive produced and released by JT the Bigga Figga, who claims to have been the first to discover The Game and offers this fifty-eight minute long CD as proof. With Sean T producing all of the beats and a list of guest stars like San Quinn and Young Noble, it’s not hard to get the picture of what this album’s gon’ sound like. That’s not at all a bad thing if you’re a fan of the Bay to begin with, but if you were expecting the thugged out Dr. Dre pianoes of “Westside Story” or the voice with more chronic than Alaska after today’s elections, this album’s bumps and Game’s chocolate tone flows may come as a shock. You can tell it’s the same MC if you pay close enough attention to his breath control on songs like “Neighborhood Supa Starz,” but I do mean CLOSE as in looking at a microbe through a microscope:

“Get it crackin like we out in the yard, and the warden’s watchin
Only difference is the whores is watchin
Still love to see a nigga, roll up on 20’s
Hop in that six-four, roll up on Bentley’s like
I’m a gangsta bay-bee, from the C-P-T
Run with the +Pound+ like I’m from DPG
If it’s beef, you C-Murder like it ain’t No Limit
And I represent the P like Russell Simmons
I’m a neighborhood superstar, get it, right
Got it? Good, okay”

One thing that clues you in besides the flow is The Game’s reliance on punchlines and similies using the names of other well known people. In “Westside Story,” The Game claims to “make niggaz disappear like Houdini” and to be “lyrically Kool G. Rap on these Dre records,” pulling from both pop and hip-hop culture. On “Untold Story” it’s largely the same, with The Game showing his wit and writing ability through the references he can pull. Case in point is “Real Gangstaz,” where The Game is of course going to compare himself to some famous figures and who he’d be like:

“Hustle, mucho dinero, heat’s confined
See more fall guys than Foreman/Ali combined
If it’s beef, I’m releasin mine
And I won’t stop rushin ’til them Escalade seats recline
The kid roll with a greasy nine, come through and blast
I return shots like Arthur Ashe
You do the math, ten shots, ten dead bodies
Fuck bein shorty, it ain’t nuttin but a gangsta party
And I’ll make sure ain’t a nigga survivin
Shoot up the ambulance, make sure it ain’t a nigga there to revive ’em
And The Game ain’t tryin to win, fuck your award
So keep that low-ass horn, and that Neil Armstrong nigga”

While the pop culture references are sometimes fresh and sometimes stale, the description of the Grammy and the MTV awards at the end of his verse shows a spark to his writing to create visual images WITHOUT having to be overly direct. It’s evidence of this talent plus a strong command of breath control and vocal charisma that made The Game such a hot prospect, but it’s hard to get over how much of a shock it is that his voice changed so much in a few years time. Then again, people said the same about 50 Cent from his “How to Rob” days to his explosion into the big-time with “Wanksta” and “In the Club.” (To this day my wife has a hard time believing me when I tell her they’re the same person.) Of course 50 had getting shot in the face as an excuse, I’m not sure what The Game’s is. One wouldn’t call it puberty, since he already has a deep voice on this disc. One can’t imagine any amount of weed or tobacco could sandpaper one’s vocal chords that much – Sinatra stayed largely the same over the decades despite a non-stop diet of drinking and smoking. What changed The Game remains a mystery, but rooted in fact is the existance of “Untold Story” as a side of the rapper that won’t be seen when he comes out next year. Then again there are parts that are as combative and fiesty as he is today that tie it all together, such as his provacative diss song “Bleek Is…” about Memphis Bleek:

“Skip through +The Blueprint+ one bang this what’s mentioned
Bleek you’re one hit away, but he didn’t know The Game was pitchin
Balls faster than Roger Clemens, nigga you’re too big for your britches
Two gold albums and I’ll make you a hitter
Might make you a little richer but don’t forget the big picture
All it do is make you a fag with money like Little Richard
Take your faggot ass picture put it next to Guiliani
Run you for your Roc-a-Wear fit and beat you with the Tommy
Drag your ass down to Albee Square
Call Beans, Jay, Freeway, Biggs, Dame I’ll be there
Compton behind me, ask Nas, Queens is with me
You ain’t never sold crack in your life, I’m takin your fiends with me
Come get me, my guns smoke like Robert Downey
Two shots and a pound, he got a room at Kings County
And you might live or sit in a box
Depending on how long it NYPD to respond to the shots”

Sean T’s production from start to finish makes “Untold Story” into a solid album, and songs like “Don’t Cry” featuring Blue Chip and “Drama is Real” featuring San Quinn may catch those who think they’ve heard The Game’s best work to date off guard. Tracks like “Call Boyz” and “Who the Illest” show The Game was just getting ready to set it off, but hadn’t found the right hook-up to do it yet. That’s by no means a knock on JT the Bigga Figga at all, but it is surprising that he had such a potentially large star in the making under his wing at one time and couldn’t do more to promote him or put his name out there. With a copyright date on the back stretching from 2002-2004, it feels like this album may have originally been released to a Cali-only audience, then reissued this fall to a national audience now that The Game has moved on but the amount of material available has failed to sate the public’s appetite. “Untold Story” is a good piece of work, but The Game’s fans today are probably not going to be satisfied until they get the official album with the stamp of approval from Dre, Eminem, and 50 on it.