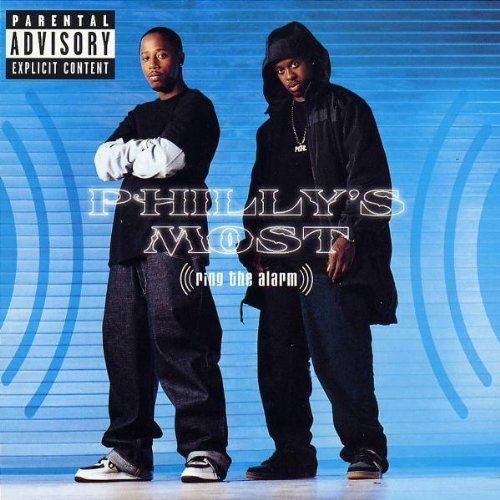 Philly’s Most :: Ring the Alarm

Philly rappers Mr. Man and Boobonic first hit the scene as Philly’s Most Wanted back in 2001. Though they had super-producers The Neptunes backing them, they only achieved mild commercial success with two radio singles, “Cross The Border” and “Please Don’t Mind.” One would have thought that failing to push units even though The Neptunes had produced the majority of their album would have spelled the end for PMW, but Mr. Man and Boobonic are back in 2004 sans The Neptunes and dropping the “Wanted” from their name.

Though Universal Records did take a chance on the duo, their return came and went with little attention from the hip-hop world. Sometime in May the label sent out the first single, a catchy club track named “Shake” that featured DC’s own DJ Kool. The track failed to catch on and surprisingly even failed to make it onto the album. “Ring the Alarm,” followed the route of the proposed first single as it hit shelves sometime during the summer and has made no commercial dent since.

“Ring the Alarm” isn’t a bad album, but it also fails to be anything more than average. The intro starts out promising with an energetic track featuring Boo and Man spitting their usual fare of punch lines and brags proclaiming their arrival. It’s a good example of what Philly’s Most is all about. “Away From Here” follows, featuring a smooth R&B hook and Philly favorite Black Thought spitting introspective lines about life and hustling on the streets. With a beat that relies more on the drums and bass to set the mood, the track sounds a bit shallow at first but grows on you after a few listens. “Ring the Alarm” is the title track and the most blatant attempt at a radio single on the album. Lyrically, Philly’s Most will make you chuckle at clever lines like:

“You better run ‘fore this gun get used off, no doubt
Be +Ludacris+ for you niggas not to +Roll Out+
Either that, or being popped, like Smashmouth
How about licks, spits, that shit, that makes that money
Cats stack them chips, sweeter than a bag of Nestle Tollhouse
So, think about the predicament you in dog
Before you talk shit again, I’m eating
(Woman: Somebody ring the alarm)
Where the fuck could you ever sit again?
And where yo peeps gon’ live again
if we beefing Hate on me, cause I’m all decent
All this hate ain’t recent
it’s been since Back when stacks start increasing
And y’all main bitches peeped it
so hold up It’s no secret, the hoes is creeping
And all y’all lies is weak and, it won’t work
(Woman: Somebody ring the alarm)
I’m freaking lifting skirts on bad broads on E! like Brooke Burke
nigga Like Brook Burke, nigga, like Brooke Burke”

Musically however the track is not as strong as it could be as it uses a watered down version of a sample we’ve all heard before.

“Most Wanted Shit” can be skipped due to a beat that features the same sample used on Jay-Z and R-Kelly’s “Somebody’s Girl” with results that pale in comparison. “Old Head Skit” is unnecessary as the only connection to the album is a reference to the guitars featured on the next track, “Dust Ya Boots.” This track has the duo spitting quicker than usual but it isn’t spectacular. The track actually sounds like a mix of the music on the aforementioned singles from “Get Down or Lay Down,” with the deep bass from “Please Don’t Mind” mixed with the guitars from “Cross The Border.” They may have tried to capture the old Neptune’s magic, but the end result lacks the “bling” of the Neptunes sound. “So Much Trouble” is more of the same with an overused sample and the same rhymes found on the rest of the album. “Pimp In Distress” is another unnecessary skit clocking in at almost two minutes.

“My Baby” is an attempt at a track for the ladies but lacks the proper production, despite a so-so hook. “Memory Lane” is a decent track, flipping the topic matter for a second allowing the duo to get deep over an unoffending track. “Point A Chick Out” is an overall uninspired track from the duo that almost bores the listener. “Clutch Shooters” ends the album with a beat that speeds up a soul sample a little too much, leading to more annoyance than melody on the track.

Without The Neptunes to propel them to the airwaves Philly’s Most will have to wait at least one more round and hope for one more chance at blowing up. This is not to say that the duo needs to hook back up with the Virginia producers, but production is the biggest problem with this album. The lackluster music fails to mask the lyrical shortcomings that Philly’s Most suffer at times. With hot production the duo has the potential of any of the street cats with witty punch lines, but without that crutch the emcees don’t do much to keep the fire burning and give anybody reason to “Ring the Alarm.”