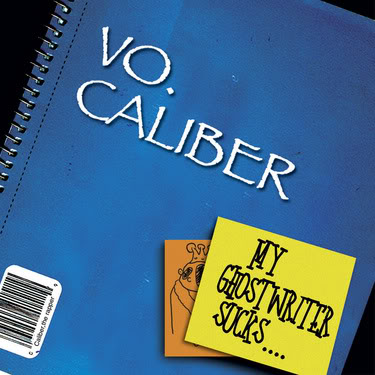 Some people still take Canadian hip-hop as a joke— and some people still would still choose a typewriter and the Pony Express over computers and email. Point? Some people need to get with the times. With consistent and consistently broadening acts such as K-Os and Swollen Members, and established groups like the Rascalz, Oddities, and Kardinal, the neighbors upstairs are showing that they have plenty of sugar for anyone who’s looking to sweeten their ears. Enter: VO.Caliber. This underground MC is trying his best not to give his country a bad rap, although with any area there’s going to be the good and the wack. Let’s see where he fits in.

On the opening track “Straight Spittin,” all the right ingredients seem to be there: tight beat, some nice lines, respectable flow, etc. However somewhere in the 2nd verse, a pattern starts to emerge. It almost starts to seem as if every other line has a simile with “like” in it and every line without “like” begins with him saying “You couldn’t blank if..” Yes, that is a slight exaggeration but the point is that the lyrics seem more like a list of random punch lines, as opposed to words that progress a song. Example:

So if you’re a punch line fanatic, this could be your type of song, but if you’re unacquainted or uninterested with the world of battle lyrics, you might not dig it.

This track is followed “Trophy Wife.” When it starts off, everything seems cool, Caliber with a nice narrative of a girl he was with, over a smooth, Jagged Edge type beat. Unfortunately, when the chorus arrives, he tries sing like Jagged Edge too. Although the off-key, lethargic crooning isn’t aurally pleasing, it doesn’t ruin track and the song is still one of the better ones on the album.

Perhaps the best track on the album is “Pianist Envy.” The assault of piano keys and choir samples set the background as Caliber comes with his best flow and doesn’t try to force punch lines or shock you, he just seems to be speaking his mind. Although he does attempt to “harmonize” on the chorus, it’s not as bad as the last attempt.

“Suicide Methods” concretes the thought that this MC is attempting to tread down the shock value path. Right from jump, he tries too hard to sound hard while yelling “Blades, knives, kills, wives, aids, dies, pills, wives.” The rest of the song consists of an Esham-type attempt to convince people to commit suicide. There’s a lot of off-beat, rushed flow going on and by the end of the song, it might’ve unintentionally convinced some to do the prior.

This MC seems to have talent but he also seems to be somewhat confused as to what avenue to channel it through; whether it be a comedic style, a negative conscious style, or the horror core style. He sounds the best and most comfortable on the more down to earth joints like the reflective “Battling Life,” the, um, political “Fuck Politics” and the previously mentioned “Pianist Envy.” It’s when he attempts to appall us with songs like “Suicide Methods,” “No Shame,” and the many lines laced within more toned down songs.

Lets face it; shock value in rap isn’t really that shocking anymore. It’s all become systematic: “okay, if I stab 2 guys, rape 3 girls, and blow up a house then I’ll be shocking.” And of course many of these rappers haven’t even seen half of that stuff on TV, let alone experienced it.

It’s time to be real. Fortunately, this rapper shows flashes of a more prominent style. As far as the album goes “My Ghostwriter Sucks” displays a mix of frustrated youth, confusion, violence, and comedy. His MC’ing skills could use a little practice, considering the occasional shaky flow and delivery. Other than that, it’s a not a bad start and hopefully he chooses the path that only goes up.