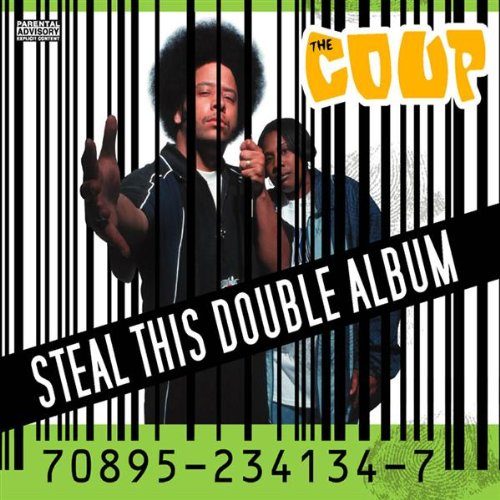 The Coup :: Steal This Double Album

Boots Riley is a much needed, albeit frequently neglected, voice in hip-hop. He has always been concerned with one thing above all: challenging traditional American thought. It’s tough, but somebody’s gotta do it. Boots’ unique vision only recently became apparent to the public with the unfortunate “Party Music” cover controversy, and The Coup got a bad rap (and surely some FBI attention) for the untimely original art of the Twin Towers burning. The fact is, a blessed few know that The Coup has been putting it down since their first widely distributed album, 1993’s “Kill My Landlord.” What many heads don’t realize is that Boots Riley is one of the wittiest, most engaging rappers out there. With a sense of humor, serious rhyming skills, and a powerful political agenda, he is always worth listening to.

From the opening moment, the 1998 record “Steal This Album” is a charged political statement full of potent concept songs. “The Shipment” opens the album, and Boots sprays the instrumental with his rhymes, talking about a new delivery arriving that “ain’t Indonesia, China White, Purple-Haired Thai, Big H Delight.” He adjusts his voice effortlessly, jumping all over the place with varying pitches. The beat is simply excellent, an incredibly funky mix with a flourish of harmonica. Far from a typical intro, it is a fully realized song.

“The Shipment” fades from earshot after four minutes, and is quickly forgotten. “Me and Jesus the Pimp in a ’79 Granada Last Night” follows, and is easily one of the most long-winded titles I have ever heard of. Luckily, the actual song is fittingly epic. Elaborate descriptions aside, I can confidently say that this is the most intricate, riveting, and simply the best rap song I have ever heard. Boots weaves an extraordinary tale of pent-up anger and subtle symbolism, and the seven minute running time feels painfully short. There is a stunning level of detail and passion infused into every line, and the gripping, vocally driven production provides the perfect complement. In just one song, Boots cements his place among rap’s great storytellers:

“City lights from far way can make you drop your jaw
Sparkling like sequins on a transvestite at Mardi Gras
There’s beauty in the cracks of the cement
When I was five I hopped over them wherever we went to prevent
Whatever it was that could break my momma’s back
Little did I know that it would roll up in a Cadillac
And matter-fact, she couldn’t see him like a cataract
And on the track, she went from beautiful to battleaxe
And back at home, she would cry into her pillow
Vomit in the commode, I was six years old
I would crawl onto her lap and we would hug and hold
She asked me what I thought of Jesus when he broke off some bread
I said, ‘He missin’ a arm, and he seem like a pee-pee head’
She said, ‘Don’t cuss,’ and my teeth to go brush
And get ready for bed, and the toilet to flush”

Without ruining it for the virgins, I will just say that the story prominently involves a pimp named Jesus (hmmmâ€¦) with a prosthetic limb, and his relationship to a prostitute and her son, the protagonist. This remarkable talent had been on display previously on tracks like “Fat Cats, Bigga Fish,” from 1994’s “Genocide and Juice.” “Me and Jesus,” though, is so full and powerful that a recent book has been based on it. This, I believe, is the epitome of hip-hop music, a wonderful story, a powerful political statement, and a puzzle all rolled into one. If somehow this song has escaped your grip, something must be done.

Aside from the crown jewel of “Steal This Album,” there is plenty else to like. “Cars and Shoes” is one of the most amusing songs in recent memory, a complete flip on the traditional representation of the automobile in hip-hop. Though the song is not as elaborate a display as “Jesus,” Boots’ versatility is in full effect:

“See me in the town you might think I’m a star
Every three months in a different car
Like the other day in a ’81 Datsun
With my alternator rolling shotgun
Or in the fall in a ’88 Seville
Pushing it with my foot down the hill
Once I did a job, the lady didn’t wanna pay me
So she offered me a hooptie instead, I said MAYBE
Cause it looked like it went through a war
Missing a door, three out of four
Ain’t bad — but is it safe to drive?
I’ll wait ’til payday, then make it live
Fixed the beat first cause that’s my choice
A bucket with the beat look like a Rolls Royce
Next week it broke down on the Bay Bridge
And lemme tell you that motherfucker dangerous!”

Boots’ flow is riveting because of what he says, but also because of the way he says it. “Cars and Shoes” is the best example of this, because he emphasizes just the right words, and his Oakland accent translates beautifully to wax. For some of the album, he reverts to a straightforward, conventional flow to get his point across. The most electric moments, though, are those in which he injects his own unique passion into his rhymes. “Breathing Apparatus” is another example of this, as Boots’ voice howls over the thumping beat, detailing an unfortunate situation in which he ends up uninsured in a hospital. In this song there is a hint of Rakim, albeit viciously twisted, in his breath.

“The Repo Man Sings For You” is a wonderfully realized collaboration between The Coup and Del. Boots plays the debtor, and Del is the man who’s coming to collect. The sardonic chorus of the repo man laughing is the finishing touch on the Arabian-tinted song, which is embellished with flourishes of piano.

The following song slows the pace down considerably. “Underdogs” is a fabulous, somber ode to those who are stuck in one place:

“Despair permeates the air then sets in your ear
The kids play with that one toy they learned how to share
Coming home don’t never seem to be a celebration
Bills, they piled up on the coffee table like they’re decorations
Heaping spoons of peanut butter, big ass glass of water
Makes the hunger subside, save the real food for your daughter
You feel like swingin’ haymakers at a moving truck
You feel like laughing so it seems like you don’t give a fuck
You feel like getting so high you smoke a whole damn crop
You feel like crying but you think that you might never stop
Homes with no heat stiffen your joints like arthritis
If this was fiction, it’d be easier to write this
Some folks try to front like they so above you
They’d tear this motherfucker up if they really loved you”

This epic, six minute song is truly haunting, but in a much subtler way than “Me and Jesus.” Boots is faintly amusing in lines like “there’s certain tricks of the trade to try and halt your defeat, like taking Tupperware to an ‘all you can eat,'” but they are delivered in such depressing fashion that a smile won’t cross your face. Boots has clearly been there, and he is the under-heard voice of a people that usually aren’t heard at all.

“Steal This Album” is a very odd listen because of the way the tracklisting is set up. Immediately following “Underdogs” is “Sneaking In,” a descriptive, comic song that lasts only 1:40. The beat is all over the place, bouncing around on either side of Boots’ voice, which addresses the problem of getting in to the club for free. “Piss On Your Grave” is another extraordinary achievement, an absolutely vicious political attack on the army, the dollar bill, and many things that fall in between. Most would think that the skit at the end, in which he urinates on George Washington’s grave, trivializes the entire message. Listening closely, though, will cement the words that he uses into your brain. He effortlessly mixes powerful statements with the outrageous and occasionally offensive, which makes the music more listenable but no less important.

The production on “Steal This Album” is mostly riveting and incredibly unique. A distinctive mix of funk samples and live instruments brings each track together nicely, and there is plenty of variety from song to song. Mostly, the slightly sporadic beats are a good complement to Boots’ vocals, which can come from any angle on any given song. And when jaw-dropping production is needed to match the rhymes, the crew provides. Essentially, saying the beats are inferior to the rhymes is meaningless, because they do the job just fine.

A recent reissue of this record, entitled “Steal This Double Album,” contains two bonus songs, “What the Po-Po’s Hate” and “Swervin,'” as well as a bonus disc. The two extra songs fit perfectly within the context of the album, and are completely welcome inclusions. The bonus disc is also interesting, a one-track recording of a live performance. To those who have not seen The Coup live (myself included), the second disc should get a couple of spins. Unfortunately, the one track is over sixty minutes long, making it difficult to locate the notable moments. Regardless, it is a great inclusion.

“Steal This Album” was released in 1998, and easily stands the test of time. Boots Riley is, song for song, one of the very best emcees in rap history, and there are moments on this record that will not be topped. The words and concepts contained on this record are truly revolutionary, and will have you thinking long after the last track fades. Even on a base level of entertainment, Boots crafts visceral and witty rhymes throughout, and musically it is a deeply funky record that is frozen in time. Even if you haven’t been there, Boots will make you understand how he feels, and that is the ultimate test of an artist in my mind. Get this album, however you can.