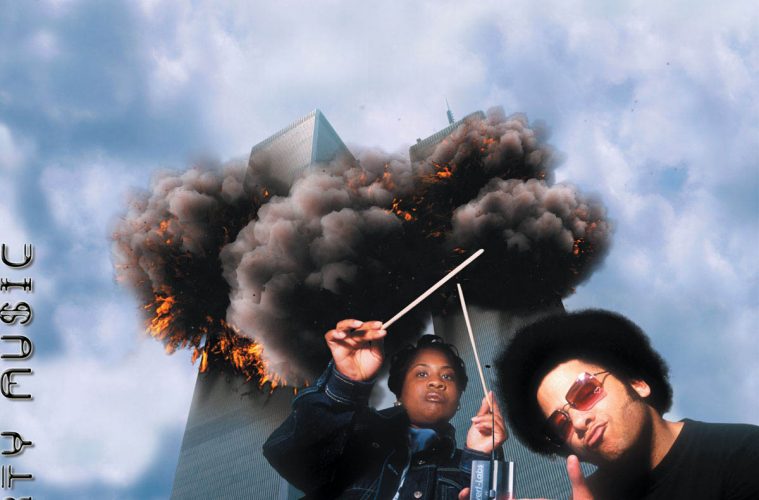 Take a close look at the picture on your left – this is the album cover that The Coup’s publicity firm wishes nobody had ever seen. The release of their fourth album “Party Music” was planned months in advance of September 11th, and their label’s art department decided to give them a fiery cover to match Boots’ fiery rhethoric. The album had yet to be distributed nationally when the twin towers were hit that fateful day, but a few copies with accompanying art had been lent to magazines and music editors for promotional purposes. In no way did they intend to exploit this tragedy, but like the fact the attack occurred at 9-1-1 on American calendars it became a freakish coincidence no one involved would ever be able to forget. Soon their album’s cover was a coast to coast bulletin on Headline News, and sad individuals who had never even heard the album were condemning it as unpatriotic.

The revised album cover which does appear on the album as sold in stores is far more tame. The only thing left in flames on the retail version is a martini glass filled with kerosene a la a “molotov cocktail.” These type of bombs are often recognized as weapons of the poor; because few destitute people can afford plastique explosives or small arms but anybody can fill an empty glass bottle with combustible fluids, light it, and toss it at the enemy. For anybody familiar with The Coup’s past three albums, the philosophical and personal war of the poor versus the rich will instantly draw both album covers into focus. Boots attacks the World Trade symbolically for the same reasons Osama Bin Laden bombed it religiously – it was and is an ostentatious display of wealth by a nation engorged fatly with the world’s riches. Whether the United States is deserving of such spoils is not a matter of debate to take up in this review, but Boots has never wavered in his disdain and disgust for those who do nothing better with wealth than kick the poor further and deeper into poverty than they already are while simultaneously gloating gleefully at their good fortune.

Lyrically, nothing has changed for Boots or The Coup in this regard. Still pissing on the graves of the middle and upper class, Boots could not paint his animosity into any brighter light than he does on the single “5 Million Ways to Kill a C.E.O.” His methods of revenge are comically amusing but also suggest the deeper roots of his frustration:

“Toss a dollar in the river and when he jump in
If you can find he can swim
Put lead boots on him and do it again
You and a friend; videotape and the party don’t end..

Tell that boogers be sellin like crack
He gon’ put the little baggies in his nose and suffocate like that
Put a fifty in the barrel of a gun
When he try to suck it out, a-ha, well you know this one”

Whether the controversy surrounding this album ultimately increased sales is unclear, but Coup albums for the most part tend to languish in unfair obscurity even among hip-hop fans. Perhaps in an industry where everybody strives to own a flyer car or a brighter wristwatch, the Marxist tendencies of wealth redistribution don’t resonate with the listeners. Fat beats helped revolutionary messages go down more smoothly during hip-hop’s so-called “golden age” but these days can’t even help Dead Prez get over (no coincidence they are guests on this album). Even this writer may have unfairly high expectations when comparing this CD to their 1993 debut album “Kill My Landlord.” Times have changed and so has the funk of the revolution, but the last CD “Steal This Album” still seems to have had a higher bump factor. Rootsy songs like “Wear Clean Draws” and “Ghetto Manifesto” are fun to listen to but really hard to get fat hits of low frequency bass from; and aren’t likely to draw non-Coup fans into their fold. “Nowalaters” has a repetitive groove that goes nowhere even with a sung hook, and “Pork and Beef” has a parody of Tha Eastsidaz and Snoop that might actually achieve the opposite of their goal – bringing less open-minded hip-hop fans to the side of conciousness.

Though Boots Riley’s lyrics remain thought-provoking and a much-needed breath of fresh air in a rap world of conspicuous consumption, a lack of groove may be much more fatal to this album’s sales than the angry retribution of people who know nothing about the group or their message. Boots provides all the production, and Pam provides all the scratching, but self-produced music seems to have failed them this time. Enough quality lick shots like “Heven Tonite” and “Lazymuthafucka” will keep their hardcore fans happy, but they seem to have missed the boat Talib Kweli rode in on — the best way to sell people on social messages is to back it up with music you can bump to in your ride whether it’s a BM or a hooptie. This could have been one of the most important albums of 2001, but compared to the rest of their catalogue it seems more like an afterthought than the shots across the unrepentant bow of capitalism it could have been.