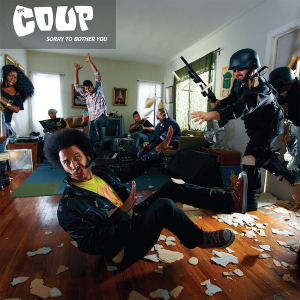 The Coup :: Sorry to Bother You

This year has been quite a year in terms of politically charged hip hop. Brother Ali, Killer Mike and Lupe Fiasco have all dropped albums channeling Public Enemy, Ice Cube and KRS-One, to varying success. But it wouldn’t be right to discuss political hip hop, without mentioning the Bay Area duo, The Coup. Boots Riley and company have dropped their fist album in six and a half year with “Sorry to Bother You,” which features their style of socially consciousness paired with a great sense of humor.

What makes “Sorry to Bother You” different from past Coup records is it has more of an electronic vibe. The funk is still there, but tracks like “The Gods of Science” feature a more synthy bassline, without sacrificing any funk. Tracks like “Strange Arithmetic” and “Your Parents’ Cocaine” also follow this formula with great success. Lead single “The Magic Clap” sounds like OutKast’s “Bombs Over Baghdad” if it actually was recorded in Iraq:

“Hurry up, get in, close the do’
This here the meeting for the overthrow
Waiting on that concrete rose to grow
Doing lines that ain’t quotable
Counting up all that dough you owe
You ain’t sposed to know its opposable
We are not disposable
Muscle up kid
We got blows to throw
Til the folks have risen
There’ll be no decision
We make the motor move
They chauffer driven
Right now we can’t shine right like a broken prism
I figured out the 14th is a broke amendment”

The album also features more organic production like the guitar-heavy “The Guillotine” and horn-driven “This Year.” The album is mostly filled with high energy cuts like “Magic Clap” and “You Are Not A Riot (an RSVP from David Siqueiros to Andy Warhol),” but one of the biggest highlights on the album comes in form of the stripped down tracks like “We’ve Got a lot to Teach You Casius Green,” which features strong vocals from Pam the Funkstress. And the string-driven “Violet” is one of the prettier tracks The Coup has ever released:

The Coup continues its great legacy of dropping heavy subject matter, while still making it fun for the listener. While “Sorry to Bother You” isn’t nearly on the level of “R.A.P. Music” or “Mourning in Americaâ€¦,” it doesn’t really try to be. What makes this record successful, is exactly what Lupe refused to do on “The Great American Rap Album:” make enjoyable songs first and spread a message second. Boots Riley made headlines back in 2011 by being heavily involved in Oakland’s Occupy Movement, but you’ll be surprised to hear that the only Occupy mention comes on the album’s closer “WAVIP,” and is said by Killer Mike.

The Coup :: Sorry to Bother You
8Overall Score
Music8
Lyrics8