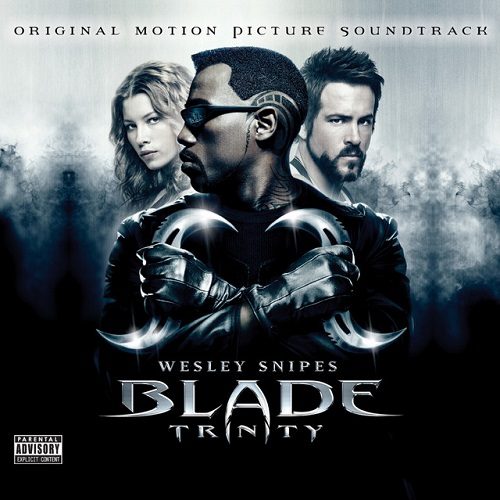 The “Blade” movies have been the vehicle for Wesley Snipes to be a gothic comic book action hero, and admittedly this “daywalker” vampire cuts a cooler swath across the big screen than the meek Tobey Maguire does as “Spider-Man.” Whether or not the sequels have maintained the impetus of the original film is a matter for debate, but what’s not is the strong connection hip-hop has had to all three films. The original film’s soundtrack featured hip-hop all stars like Bizzy Bone, GangStarr, KRS-One and Mystikal busting brand new tracks. On the second installment things got deeper, as an aggressive attempt to mash up electronia and hip-hop paired everyone from Cypress Hill and Roni Size to Mystikal and Moby (what oh what would Eminem say).

It’s no surprise then that the third installment in the series is also aggressively hip-hop, although this short 50 minute release has a strong Wu-Tang flavor to it’s rap arsenal. The opening track “Fatal” is performed and produced by the RZA, and is as menacing and heavy as one would expect from it’s title. RZA splices carefully chosen samples into his Shaolin swordplay flow, but they’re taken from the movie itself and not his usual array of martial arts masterpieces. It’s no secret that Robert Diggs loves action films though, and his spartan lyrics capture the mood of this film quite well:

“It’s the feast of the blood with sin, unleash the beast within
I walk around, with the strength, of a hundred men
You best to run before I count to ten
Blood drippin from my canine, like a fountain pen
It seems I’ve been asleep for a thousand years
The way my world has changed it bring me a thousand tears
Prince of darkness, that walks through the rays of light
To this be the vampire, I’m the prototype
The shape shiftin mirror image, flash phototype
The everlasting original, red blood O type”

The Wu-Tang influence continues to be felt on “I Gotta Get Paid,” a surprising fast paced combination of Lil’ Flip, Ghostface Killah and Raekwon the Chef all on one track produced once again by RZA. Would you be shocked to know he also “When the Guns Come Out” as well? The only recognizable Wu member on this one though is Christ Bearer of Northstar, as WC and E-40 clearly take the starring roles. The next track is significant for being one of Ol’ Dirty Bastard’s last recorded appearances, with Black Keith providing the sung parts between his classically slurry verbals on the song “Thirsty”:

“I can’t think, let me sink into your jugular
Come have a drink, with the thirsty love guzzler
From the darkside, baby don’t be afraid
You can’t fight the thirst, nor escape the Blade
I’m been scopin ya, hopin you be open to
Take a sip, of the potion cause it’s overdue
It’s not your ordinary, it’s a special brew
In the heat of the night, I will rescue you”

It’s at this point in the soundtrack that both the Wu-Tang and the hip-hop influence begin to fade. Ramin Djawadi and RZA do an instrumental duet together named “Daywalkers,” but after that the only rap track is the club mix of Kool Keith and Thee Undatakerz “Party in the Morgue.” The rest is filled out with dark industrial and techno music from Overseer, Paris Texas, and Crystal Method. To be honest that type of jam is not necessarily this reviewer’s first listening choice most of the time, but to my non-industrially saavy ear the songs seem acceptable. Given the strong presence of hip-hop on the last two soundtracks though, particularly “Blade II,” one might have been led to believe “Blade Trinity” would be more of the same. Clocking in at just barely 50% of the soundtrack if you include RZA’s instrumental duet, what’s here is good, but may not be enough to satisfy a hungry rap fan’s appetite. For what it’s worth it’s still far more solid than most soundtracks full of no-name MC’s and throwaway tracks, so you may want to give it a chance anyway, especially if you’re a die-hard Wu-Tang Clan fan.