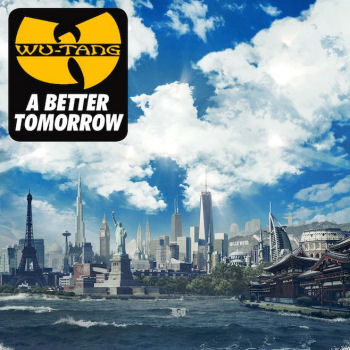 If you’ve been following the well-documented differences between RZA and Raekwon, you’ll know that both had different visions of how the first Wu-Tang Clan album in 7 years would turn out. RZA has grown as a producer, moving on to motion picture soundtracks and taking his martial arts influences on to produce his own film (“The Man With The Iron Fists“). Raekwon on the other hand, has experienced a renaissance in his career following 2009’s “Only Built 4 Cuban Linx 2“, going on to release some albums that weren’t “Immobilarity“. Raekwon wanted to maintain that unique Wu-Tang grittiness, whereas RZA knowingly stated that he isn’t “that” producer any more. He’s grown. The problem with “A Better Tomorrow” is that it doesn’t feel like a Wu-Tang Clan record, despite coming from the whole core crew (R.I.P. O.D.B.). One could argue that the Wu have been on a downward spiral ever since Ol’ Dirty passed away in 2004 – how many great records have there been since? Masta Killa’s “No Said Date“, Ghostface’s “Fishscale” and GZA’s “Grandmasters” spring to mind, but they all popped up between 2004 and 2006.

By 2007, the group’s return was a big deal, but “8 Diagrams” completely underwhelmed all but the most devout Wu fan. In 2014, the Clan are back but it’s an unbalanced collection of verses, that may annoy some die-hards. Of the 15 tracks, GZA has a meagre six verses, Ghostface has seven and Raekwon (understandably) pops up with five. Although Method Man is on nearly every track (11), Masta Killa (10) and Cappadonna (9) make up much of the album, perhaps showing how important the Wu-Tang brand is to those emcees. The thing is, the more I research on the inner conflicts that occurred during the recording process for “A Better Tomorrow”, the more divided I feel about the Wu-Tang Clan’s identity. Raekwon has questioned RZA’s direction on this album, while RZA has questioned Raekwon’s ego – both have valid points. But I’m not providing an opinion on Raekwon or RZA, all that we at RapReviews.com care about is the music – as a Wu-Tang fan, I’m siding with Raekwon and hope this IS the last Wu-Tang Clan record.

“Ruckus In B Minor” kicks off proceedings, and combines old school crowd interaction on the hook with a beat that continues to change as each Clan member steps up to the mic. RZA, Meth and Rae all sound as hungry as they ever did, and it’s a great way to remind listeners what the Wu is all about. It’s a shame then that “40th Street Black / We Will Fight” sounds corny as hell with its knock-off war cries and second-rate horns. GZA has traded chess for science, and throws in rhymes about atoms and matter on “Hold the Heater”, one of the few songs to live up to the hook’s mantra of “we keep it rugged, we keep it rough, we keep it raw”.

I hate to sneer at sung hooks like the rap snob I am, but “Keep Watch” and “Wu-Tang Reunion” lack the purity provided by a Blue Raspberry or Tekitha – male singing on a Wu-Tang Clan song just never felt right. It’s like the lyricists are jabbing at my ears, and the crooning is there to caress them. Maybe I’m a massive sexist, but the feminine quality of classics like Method Man’s “Release Yo Delf” complemented the gruff rhymes without softening the blows being dealt from whichever swordsman was spitting. With the kung-fu gimmick at its least prevalent in years, each member in their 40s and the live instrumentation that’s used, it’s a strange hybrid of men making mature hip hop without letting go of the style they became ubiquitous with.

RZA is certainly experimenting on a bunch of tracks, but results are unconvincing. “Miracle” works, proving that hip hop beats can blossom as the minutes tick by. `Dusty Springfield’s “Son of a Preacher Man” is sampled on “Preacher’s Daughter” and the sample overshadows everything that’s going on – a lot like The Beatles’ “While My Guitar Gently Weeps” did on “My Heart Gently Weeps” on the previous album. RZA isn’t making bad songs here, it’s just I’d rather hear a RZA album with these moments and keep the Clan out of it. “Ron O’Neal” is the worst Wu-Tang Clan single yet, simply because it doesn’t know what it wants to be. RZA himself spits a violent verse but then the hook talks about “making cheddar”.

The positive message that the Wu often claim to provide never really registers, because as much as I’d love to play this album with my young daughters’ ears nearby (Wu-Tang is for the children right?), the foul language puts pay to that idea. The main problem with “A Better Tomorrow” is that it’s just not interesting enough – none of the tracks are memorable or feel capable of standing up against any of their previous work. There’s just too much mediocrity here to justify another Clan album. “Mistaken Identity” sums it up well, and the song “Wu-Tang Reunion” feels like the guys are hugging it out after one too many Appletisers.

2007’s “8 Diagrams” was a real mixed bag that was a more tepid experience than 2001’s lively “Iron Flag”. Thirteen years then, since a good Wu-Tang Clan album; what we’re left with is another “8 Diagrams” situation, whereby RZA has tweaked his sound with each passing year and it’s the primary culprit for “A Better Tomorrow”‘s underwhelming beats. We all recognise the Clan members can still deliver vocally, but if the instrumentals aren’t edgy or sinister, or bursting with character, it just doesn’t feel like Wu-Tang.

For somebody that has followed the Wu-Tang Clan and their vast family tree through thick and thin, and has spent their hard-earned on trash like “Tical 2000” and “Ghost Dog: The Way of the Samurai”, I was really looking forward to “A Better Tomorrow”. Most members have found a second (or third) wind: Inspectah Deck was part of the excellent CZARFACE project with 7L & Esoteric, Ghostface Killah has been killing it for years now, whether it was “Apollo Kids” or “12 Reasons To Die”, and even Cappadonna came correct with his double-disc effort “Eyrth, Wynd & Fire”. Minus the cringeworthy TV series lines by Deck on “Ruckus in B Minor”, this project is on point lyrically, but the Wu finds itself in a catch 22 situation whereby they can’t release an album under the Wu-Tang Clan banner without the RZA involved. He built this empire, but it looks like he is the one that’s tarnishing that golden W every time he sets up a reunion album.