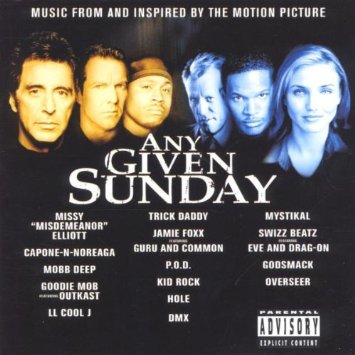 Various Artists :: Any Given Sunday Soundtrack

It’s about time Oliver Stone had a soundtrack where hip-hop was the focus; not an incidental inclusion or a token gesture to the rap fans. What more appropriate time to do it then than “Any Given Sunday” — a movie whose star WOULD have been Puff Daddy but which suffers none for featuring Jamie Foxx as “Steamin'” Willie Beaman — and it just so happens he’s a better rapper than Puffy too.

What makes this album work is the quality of the contributions from a myriad of hip-hop’s finest: Missy is her usual ‘Hit Em Wit Da Heee’ self on ” Who You Gonna Call”, the Mobb is still Deep on “Never Goin’ Back”, and Goodie Mob teams up with OutKast for a Dungeon Family reunion on “Sole Sunday”. Other than being overheard in the score of the film ask me what two out of three of these songs have to do with the movie – nothing. Do we expect them to? I can’t remember the last rap soundtrack that successfully pulled that off. The bigger coup is just to have GOOD songs. This one does.

Admittedly, there are a few flaws. LL Cool J attempts a really misguided triple-cadence Southern rap flow on “Shut ‘Em Down” which only serves to illuminate how dated his 1980’s rap style is. Trick Daddy’s “Shut Up” SHOULD serve as a rebuttal to it esp. given it immediately follows LL but fails to deliver the needed knockout punch. Hole’s “Be a Man” and Godsmack’s “Why” really don’t belong in a sandwich around DMX, Mystikal, and Eve. Why indeed.

Do yourself a favor – think carefully about which is more interesting – what Oliver Stone implies by showing DMX’s “My Niggas” to a montage of white owners and coaches, or why DMX chose to reuse a song which is about a minute long over one of the best beats he’s seen. When you’re done thinking about that, enjoy the movie (it’s good) and enjoy the soundtrack (equally impressive) and remember that on Any Given Sunday, you can win or lose; like Stone’s movie, most of these artists come up winners.