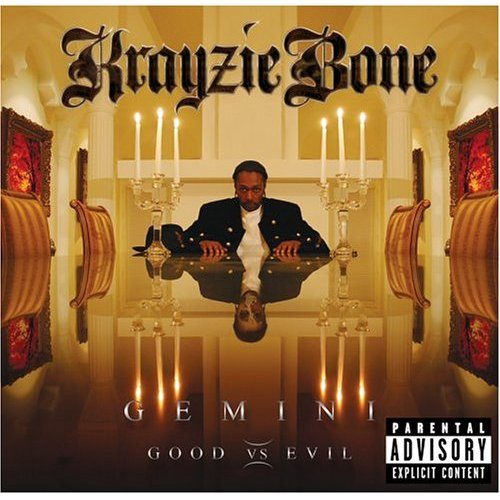 The Bone Thugs phenomenon may change over time, but it never really fades out or dies off. One could hardly have guessed a over a decade ago when the Bone Thugs-N-Harmony debuted to the hip-hop world on “Thuggish Ruggish Bone” that they would become household names, icons of the music business, and spawn off as many solo and side projects as the Wu-Tang Clan themselves. And like the Wu-Tang Clan, the Bone Thugs have shown that with solo success, it becomes increasingly harder to reunite all the group’s members for albums together. I’m not really sure how many times Bone seemed set to be on their own permanently but came back as a unit “just one more time” and frankly I’ve stopped trying to keep track. As good as they are together, group members like L-Burna (Layzie Bone) and Bizzy Bone have proved they can hang on their own with albums like “Thug By Nature” and “Alpha and Omega.”

Of course Krayzie Bone is no exception to the solo success of Bone Thugs members, and may be the most successful of them all. He’s made a name for himself with releases like the double album “Thug Mentality 1999” and 2001’s “Thug On Da Line,” but it’s been four long years since Krayzie put out a new solo release. Although he’s put out singles and soundtrack cuts and appeared on other records in the interim, he hasn’t had that spotlight all to himself for quite a while. Last time out Krayzie jumped ship from Relativity Records to Loud Records, and since Loud is relatively defunct as a hip-hop label (no pun intended) it’s no surprise that Krayzie has again found a new home, Ball’r Records. After getting hints of his new album bubbling up through the underground for the last three months, Ball’r has finally given “Gemini – Good vs. Evil” a national release.

The title and the coverart accurately reflect the unique dual nature of Krayzie Bone as an artist. He has a spiritual side from which he exhorts people have “got to pray, got to pray, every day, every day” on songs like “Let’s Live,” but growing up rugged in the streets of Cleveland gave him the skills to “Get’chu Twisted” if you make the mistake of crossing his path:

“You see me hit the ground runnin
A hundred miles and still gunnin
I might be the coldest nigga that ever done it
I hit ’em with the flow that’ll get me paid
Money, at the same time in the game ya can’t touch this
Smooth with the roughness, thuggish ruggish
I put a little bit of singing with it, and they love it (rugged)
Pull up on ’em and I buck it, bust it
Lyrical killa to get dusted (dusted!!)
I can tell how you bite my style, you been eatin good
But I’m finna shut ’em all down (all down)
All y’all fall down, Mr. Sawed Off, raw dawg”

In astrological terms, Gemini (May 22nd to June 21st) is considered to be the birth sign of those who are charming and quick witted, but have an equally dark and dangerous side. “We’ll bomb yo’ shit, before you even realize we the niggaz got a problem with” is the negative side of Krayzie on “Mangled,” while “I know sometimes that we may praise this life, but I’m here to tell you that we all paid the price” on “Lock Down Love” is Krayzie letting the light shine in. Krayzie is uniquely positioned to succeed as a soloist because of this dichotomy, because his material stays refreshing and never gets overly thuggish or too preachy. Among all the Bone members, Krayzie may also have the clearest and easiest diction to understand lyrically, and a pleasant mid-range octave to his rapping/sing-song style. It would be fair to say that without the success of artists like Krayzie Bone paving the way, a smooth voiced hip-hop rapper with a musical flow style like Nelly would never have found the road to success nationally.

Of course “Gemini – Good vs. Evil” wouldn’t work without a set of good beats, and this album definitely succeeds on that score. There are a lot of hands stirring the pot here – everybody from Lil Jon on “Get’chu Twisted” to LT Hutton on “I Remember,” but it’s remarkable how each different beat seems tailor made to fit the style and message of the song Krazyie is performing. “Gemini – Good vs. Evil” will please a lot of people, whether they are fans of the Bone Thugs, or of Krayzie Bone as a soloist. If you haven’t checked out any of the other solo records, this wouldn’t be a bad place to start. And just in case you thought Bone Thugs was done as a group again, the “Get’chu Twisted” remix at the end features Wish, Lazy and Bizzy all on the cut, so don’t get it twisted. The Bone Thugs legacy is far from over, this is just another chapter in their book of thugs.